YALE (US) — Humans aren’t the only creatures to perceive others as “us versus them.” Our primate cousins have been doing it for at least 25 million years.

In series of experiments, Yale University researchers led by psychologist Laurie Santos showed that monkeys treat individuals from outside their groups with the same suspicion and dislike as their human cousins tend to treat outsiders, suggesting that the roots of human intergroup conflict may be evolutionarily quite ancient, dating back 25 million years, when humans and rhesus macaques shared a common ancestor.

The findings are reported in the March issue of the Journal of Personality and Social Psychology.

“One of the more troubling aspects of human nature is that we evaluate people differently depending on whether they’re a member of our ‘ingroup’ or ‘outgroup,'” Santos says.

“Pretty much every conflict in human history has involved people making distinctions on the basis of who is a member of their own race, religion, social class, and so on. The question we were interested in is: Where do these types of group distinctions come from?”

The answer, she adds, is that such biases have apparently been shaped by 25 million years of evolution and not just by human culture.

Santos and her lab studied the rhesus macaques living on an island off the coast of Puerto Rico. Like humans, monkeys in this population naturally form different social groups on the basis of family history. In order to assess whether monkeys made the same distinctions between ingroup and outgroup individuals, the researchers used a well-known tendency of animals to stare longer at novel or frightening things than at familiar or friendly things.

“What made this result even more remarkable” notes Neha Mahajan, a graduate student who headed up this project, “is that monkeys in this population move around from group to group, so some of the monkeys who were ‘outgroup’ were previously ‘ingroup.’ And yet, the result holds just as strongly for monkeys who have transferred groups only weeks earlier, suggesting that these monkeys are sensitive to who is currently to be thought of as an insider or an outsider.

In other words, although monkeys divide the world into ‘us’ versus ‘them,’ they do so in a way that is flexible and is updated in real time.”

Santos and colleagues then asked whether monkeys evaluated ingroup and outgroup members differently—did they associate these individuals automatically with “good” and “bad” respectively?

To study this, they developed a monkey version of a test of implicit attitudes known as the IAT. In humans, this test measures the extent to which people show implicit biases against members of other groups. To look at the same capacity in monkeys, the researchers showed monkeys a sequence of photos in which photos of ingroup or outgroup monkey faces were paired with photos of either good things, such as fruits, or bad things, such as spiders.

On the other hand, the monkeys stared longer at sequences in which outgroup individuals were paired with positive objects like fruit suggesting that this association was unnatural to the monkeys. Like humans, monkeys tend to spontaneously view ingroup members positively and outgroup members negatively. 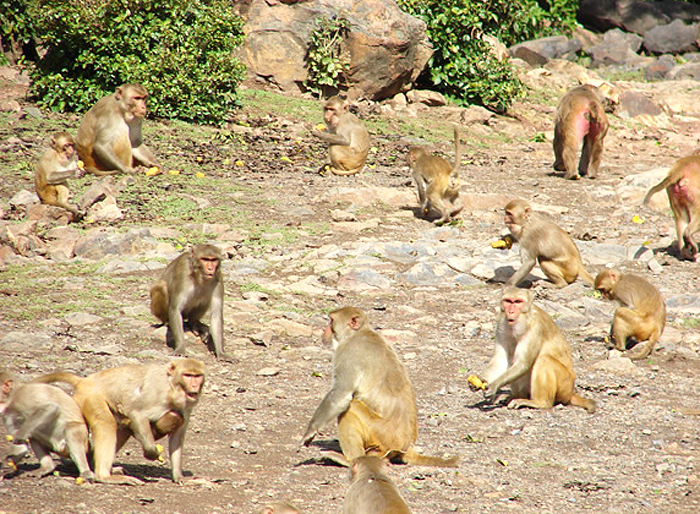 The distinctions humans make between “us” and “them”—and therefore the roots of human prejudice—may date back at least 25 million years, when humans and rhesus macaques shared a common ancestor. (Credit: Yale University)

“Social psychologists introduced the world to the idea that the immediate situation is hugely powerful in determining behavior, even intergroup feelings,” said Mahzarin Banaji, of the Department of Psychology at Harvard University and a co-author of the paper. “Evolutionary theorists have made us aware of our ancestral past. In this work, we weave the two together to show the importance of both of these influences at work.”

“The bad news is that the tendency to dislike outgroup members appears to be evolutionarily quite old, and therefore may be less simple to eliminate than we’d like to think,” Santos says. “The good news, though, is that even monkeys seem to be flexible about who counts as a group member. If we humans can find ways to harness this evolved flexibility, it might allow us to become an even more tolerant species.”

Researchers from Bar-Ilan University and Harvard also contributed to the study.