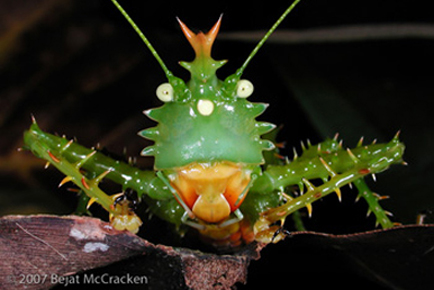 Crowned like a king, the spike-headed katydid, Panacanthus cuspidatus, is one of the projected 100,000 insect species in Yasuní. Researchers say the Ecuadorian rainforest is one of the most biodiverse places in the world. Below, the Yasuní rainforest canopy. (Credit: Bejat McCracken)

U. TEXAS-AUSTIN/NYU—A team of scientists has documented that Yasuní National Park, in the core of the Ecuadorian Amazon, shatters world records for a wide array of plant and animal groups, from amphibians to trees to insects.

The authors also conclude that proposed oil development projects represent the greatest threat to Yasuní and its biodiversity.

“This study demonstrates that Yasuní is the most diverse area in South America, and possibly the world,” says Peter English of the University of Texas at Austin. “Amphibians, birds, mammals and vascular plants all reach maximum diversity in Yasuní.” 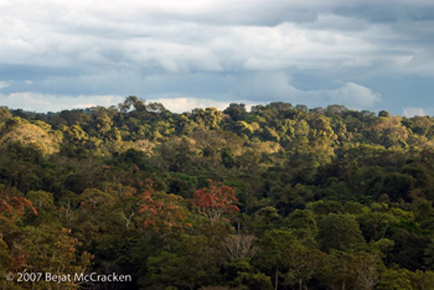 The study is published in the open-access scientific journal PLoS ONE.

“We have so far documented 596 bird species occurring in Yasuní,” says English, a bird specialist. “That’s incredible diversity to find in just one corner of the Amazon rainforest and rivals any other spot on the planet.”

Other specialists joined in to give the first complete picture of the extraordinary diversity found in Yasuní National Park.

Di Fiore emphasizes that two of the species, the White-bellied Spider Monkey and Poeppig’s Woolly Monkey, are highly threatened in most of their range but maintain healthy populations in Yasuní.

“The 150 amphibian species documented to date throughout Yasuní is a world record for an area of this size,” says Shawn McCracken of Texas State University. “There are more species of frogs and toads within Yasuní than are native to the United States and Canada combined.”

The scientists also confirmed that an average upland hectare (2.47 acres) in Yasuní contains more tree species, 655, than are native to the continental United States and Canada combined. The number of tree species rises to more than 1,100 for an area of 25 hectares.

“In just one hectare in Yasuní, there are more tree, shrub and liana (woody vines) species than anywhere else in the world,” says Gorky Villa, an Ecuadorian botanist working with both the Smithsonian Institution and Finding Species.

Perhaps the most impressive statistic of all is that a single hectare of forest in Yasuní is projected to contain 100,000 insect species. According to eminent entomologist Terry Erwin, that is the highest estimated diversity per unit area in the world for any plant or animal group.

“One of our most important findings about Yasuní is that small areas of forest harbor extremely high numbers of animals and plants,” says lead author Margot Bass, president of Finding Species, a nonprofit with offices in Maryland and Quito, Ecuador. “Yasuní is probably unmatched by any other park in the world for total numbers of species.”

The extraordinary diversity of Yasuní is best exemplified at the 1,600-acre Tiputini Biodiversity Station on the northern edge of the park.

“The Tiputini Biodiversity Station is home to 247 amphibian and reptile species, 550 bird species and around 200 mammal species,” says Kelly Swing of the University of San Francisco in Quito, Ecuador.

“What makes Yasuní especially important is its potential to sustain this extraordinary biodiversity in the long term,” says Matt Finer of Save America’s Forests. “For example, the Yasuní region is predicted to maintain wet, rainforest conditions as climate change-induced drought intensifies in the eastern Amazon.”

The paper concludes with a number of science-based policy recommendations. One key recommendation is a moratorium on new oil exploration or development projects within the park, particularly in the remote and relatively intact—but oil rich—northeast corner.

The Ecuadorian government is promoting a revolutionary plan, known as the Yasuní-ITT Initiative, which would leave the park’s largest oil reserves in the ITT block permanently under the ground. A lack of funding commitments, however, now threatens the proposal.

“The Yasuní-ITT Initiative urgently needs international funders to step up and make it a success, or else more drilling in the core of Yasuní may become a tragic reality,” Finer says.