"You can imagine a folded sheet of some material and popping in defects to make a stiff shield, or somehow deploying an object and giving it a rigid backbone," says Itai Cohen. (Credit: Jesse Silverberg/Cornell) 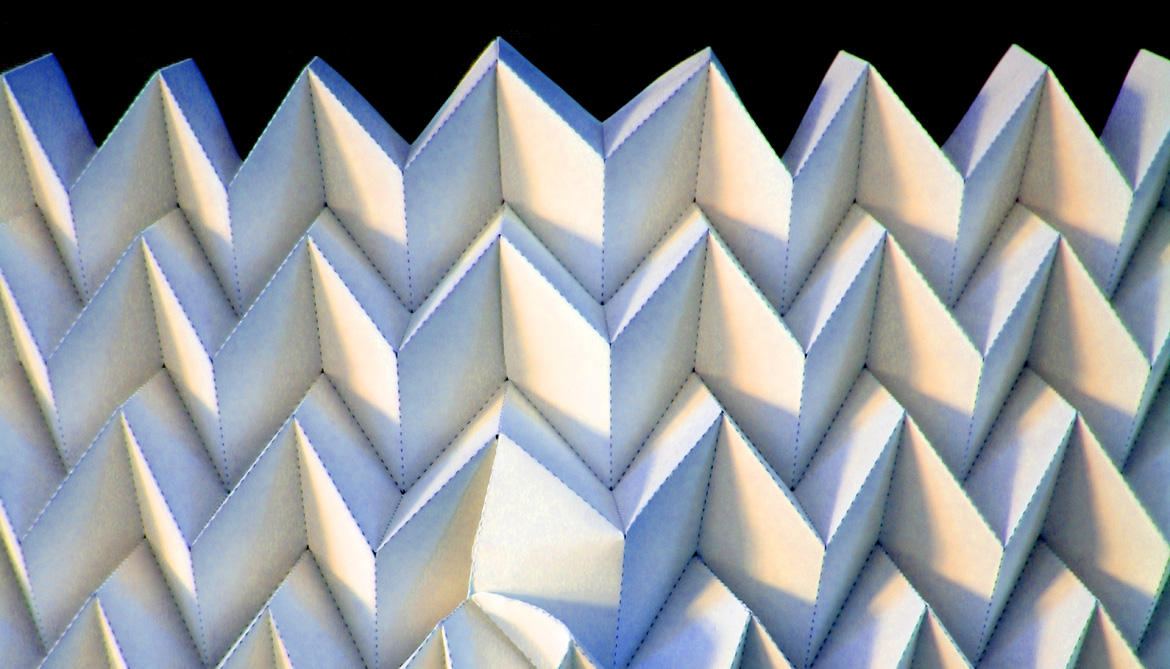 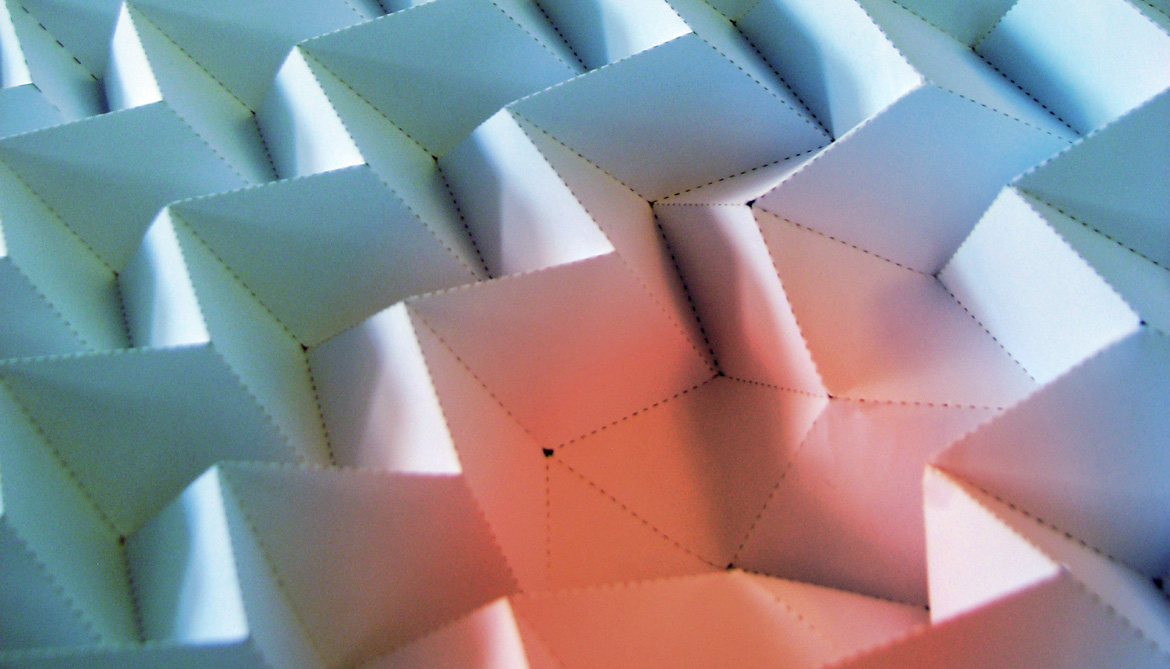 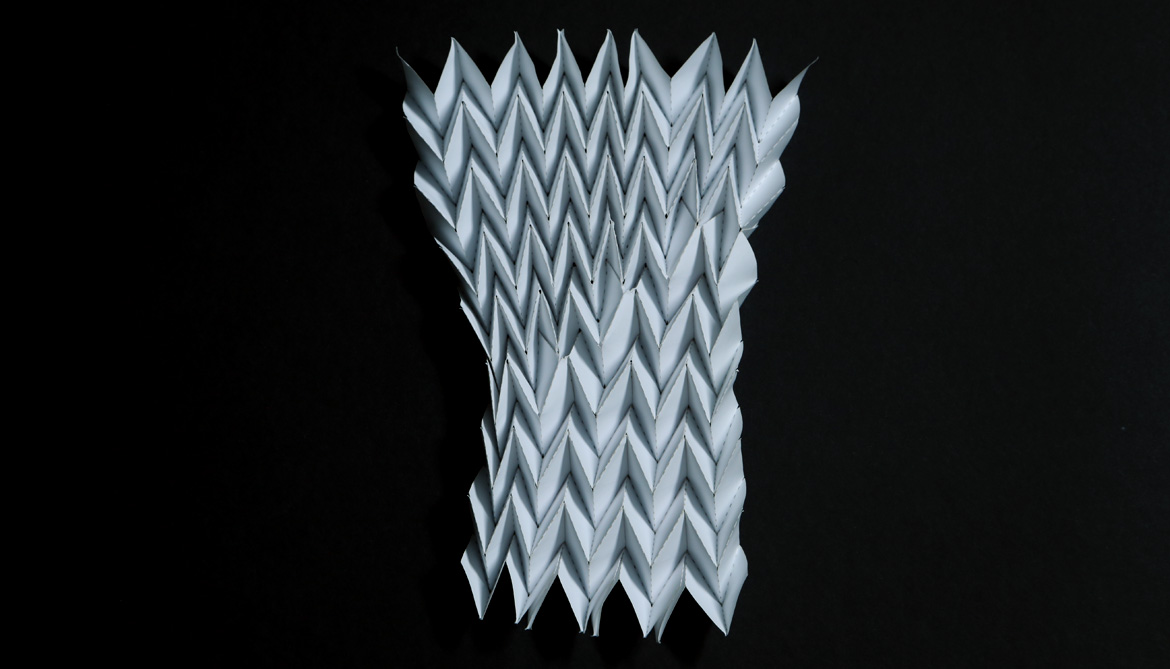 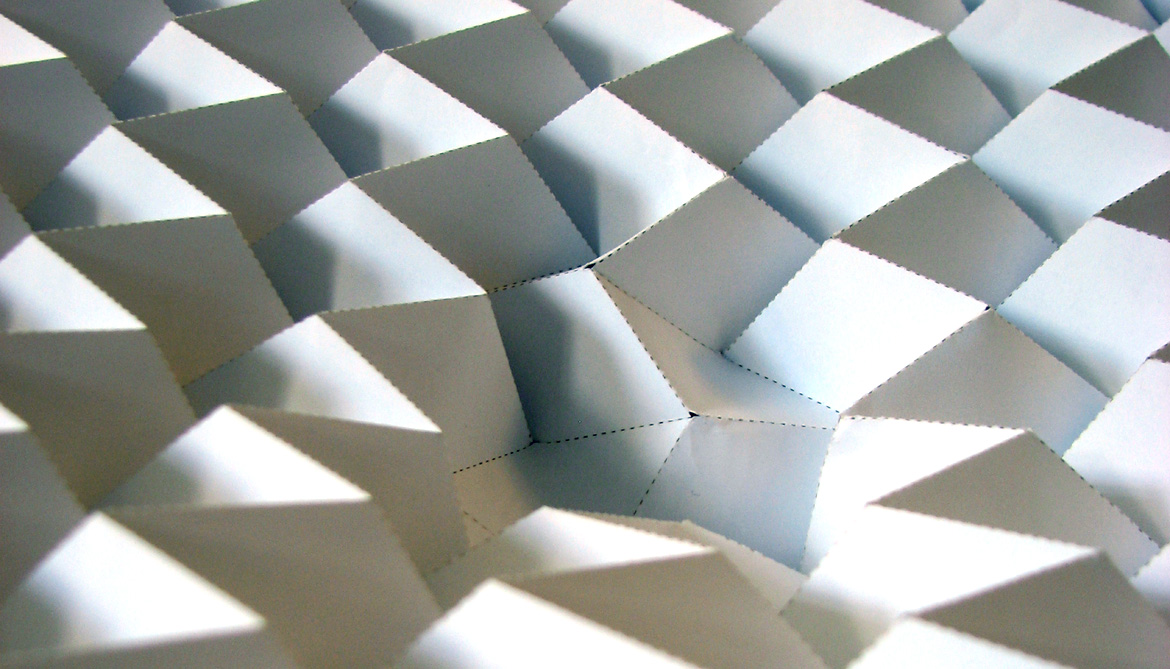 Researchers have discovered how to use a well-known origami folding pattern called the Miura-ori to control fundamental physical properties of any thin sheet of material.

The Miura-ori, which consists of repeatedly folded parallelograms, can change the stiffness of a sheet of paper—and, by extension, any material from which it’s folded—based only on the crease pattern.

Moreover, by altering the pattern and introducing defects, they showed how to tune its stiffness, creating a material in which physical properties can be programmed.

Cornell University graduate student Jesse Silverberg, an origami enthusiast since second grade, got the idea for studying the Miura-ori during a physics meeting, when coauthor Chris Santangelo of the University of Massachusetts, Amherst, noticed its unusual properties.

Most known materials bulge when squeezed, like a sponge. But the Miura-ori contracts when squeezed. “This is desirable for engineering all sorts of devices you wouldn’t be able to make otherwise,” says Silverberg.

The team used desktop models—many hand-folded by Silverberg—and computational analysis by Arthur Evans of University of Massachusetts, Amherst, to identify principles that could be applied to the design of metamaterials. Their findings appear in Science.

Metamaterials are generated by a repeating pattern of smaller subunits to engineer exotic, non-natural properties on larger scales. The Miura-ori itself can be considered a mechanical metamaterial because its stiffness can be controlled by the specific fold angles of the parallelograms, Silverberg says.

But unlike other metamaterials with fixed properties, “pop-through defects,” which are made by changing crease directions, can be introduced at arbitrary locations within the sheet to change its stiffness.

Using numerical simulations, Evans and Santangelo calculated the effect that such a pop-through defect has on the Miura-ori. They showed that it instantly makes the entire sheet stiffer, and that their effect is additive.

They also found that a neighboring pop-through defect with opposite orientation can cancel out the first defect. This effect is similar to what in atomic systems would be called a “vacancy”—where an atom is removed from a crystal lattice.

“We’re looking at an origami structure and using a language developed for understanding the mechanical properties of atomic crystals to talk about what we see here,” Silverberg says.

“Our work brings together origami, metamaterials, programmable matter, crystallography and more. It’s totally bizarre and unique to have so many of these ideas intersecting at the same time.”

The dream? Atomic-scale machines programmed based on folding patterns that could snap into place and perform mechanical functions.

“You can imagine a folded sheet of some material and popping in defects to make a stiff shield, or somehow deploying an object and giving it a rigid backbone,” says Itai Cohen of Cornell, who co-led the team with Silverberg.

“You can think of it as appendages that can be locked in place or a useful tool whose properties can be set once it has been deployed. In that way, it’s kind of like the ‘Transformers,’ where robots fold themselves up but unfurl, locked, into human form.

“It is amazing that there are so many hidden scientific research problems buried in just a simple sheet of paper,” he adds.

The National Science Foundation supported the work, which took place in collaboration with theoretical physicists and polymer engineers at University of Massachusetts, Amherst, and mathematicians at Western New England University.

Cohen’s group will present the research at the Sixth International Meeting on Origami in Science, Mathematics and Education, August 10-13 in Tokyo.