U. MARYLAND-COLLEGE PARK (US) — Bad viruses are being put to good use to build a new generation of small, powerful, and highly efficient batteries and fuel cells.

Researchers are harnessing and exploiting the “self-renewing” and “self-assembling” properties of the spaghetti-shaped Tobacco mosaic virus (TMV)—a widespread menace to plants such as tobacco and peppers—to build tiny components for the lithium ion batteries of the future.

They can modify the TMV rods to bind perpendicularly to the metallic surface of a battery electrode and arrange the rods in intricate and orderly patterns on the electrode. Then, they coat the rods with a conductive thin film that acts as a current collector and finally the battery’s active material that participates in the electrochemical reactions.

Details of the work have been reported in several publications, including most recently the journal Nanotechnology.

The technique greatly increases the electrode surface area and its capacity to store energy and enable fast charge/discharge times. TMV becomes inert during the manufacturing process; the resulting batteries do not transmit the virus. The new batteries, however, have up to a 10-fold increase in energy capacity over a standard lithium ion battery. 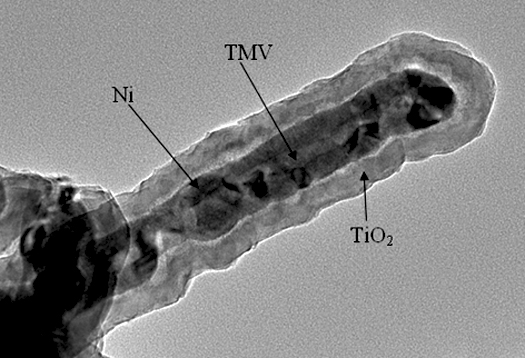 “The resulting batteries are a leap forward in many ways and will be ideal for use not only in small electronic devices but in novel applications that have been limited so far by the size of the required battery,” says Reza Ghodssi, a professor of electrical and computer engineering at the University of Maryland. “The technology that we have developed can be used to produce energy storage devices for integrated microsystems such as wireless sensors networks.

“These systems have to be really small in size—millimeter or sub-millimeter—so that they can be deployed in large numbers in remote environments for applications like homeland security, agriculture, environmental monitoring and more; to power these devices, equally small batteries are required, without compromising in performance.”

The technique
TMV’s nanostructure is the ideal size and shape to use as a template for building battery electrodes. Its self-replicating and self-assembling biological properties produce structures that are both intricate and orderly, which increases the power and storage capacity of the batteries that incorporate them. Because TMV can be programmed to bind directly to metal, the resulting components are lighter, stronger, and less expensive than conventional parts.

Three distinct steps are involved in producing a TMV-based battery: modifying, propagating, and preparing the TMV; processing the TMV to grow nanorods on a metal plate; and incorporating the nanorod-coated plates into finished batteries.

The plants
Collaborator and plant scientists James Culver and Adam Brown had already developed genetic modifications to the TMV that enable it to be chemically coated with conductive metals. For this project, they extract enough of the customized virus from just a few tobacco plants grown in the lab to synthesize hundreds of battery electrodes. The extracted TMV is then ready for the next step.

The team produce a forest of vertically aligned virus rods using a process developed by Culver’s former Ph.D. student Elizabeth Royston. A solution of TMV is applied to a metal electrode plate. The genetic modifications program one end of the rod shaped virus to attach to the plate. Next these viral forests are chemically coated with a conductive metal, mainly nickel.

Other than its structure, no trace of the virus is present in the finished product, which cannot transmit a virus to either plants or animals. This process is patent-pending.

Researchers have used this metal-coating technique to fabricate alkaline batteries with common techniques from the semiconductor industry such as photolithography and thin film deposition.

The future
While the first generation of their devices used the nickel-coated viruses for the electrodes, work published earlier this year investigated the feasibility of structuring electrodes with the active material deposited on top of each nickel-coated nanorod, forming a core/shell nanocomposite where every TMV particle contains a conductive metal core and an active material shell.

The researchers have developed several techniques to form nanocomposites of silicon and titanium dioxide on the metalized TMV template. This architecture both stabilizes the fragile, active material coating and provides it with a direct connection to the battery electrode.

“Virus-enabled nanorod structures are tailor-made for increasing the amount of energy batteries can store. They confer an order of magnitude increase in surface area, stabilize the assembled materials and increase conductivity, resulting in up to a10-fold increase in the energy capacity over a standard lithium ion battery,” says Chunsheng Wang, a professor in the Department of Chemical and Biomolecular Engineering.

The bonus
Since the TMV binds metal directly onto the conductive surface as the structures are formed, no other binding or conducting agents are needed as in the traditional ink-casting technologies that are used for electrode fabrication.

“Our method is unique in that it involves direct fabrication of the electrode onto the current collector; this makes the battery’s power higher, and its cycle life longer,” says Wang.

The use of the TMV virus in fabricating batteries can be scaled up to meet industrial production needs. “The process is simple, inexpensive, and renewable,” Culver adds. “On average, one acre of tobacco can produce approximately 2,100 pounds of leaf tissue, yielding approximately one pound of TMV per pound of infected leaves,” he explains.

Funding for the research comes from the National Science Foundation, the Department of Energy Office of Basic Energy Sciences, the Maryland Technology Development Corporation, and the University of Maryland.

More news from the University of Maryland: www.eng.umd.edu/media

Quinoa’s flowering genes could make it easier to grow

Standards would boost efficiency of LED lighting in greenhouses