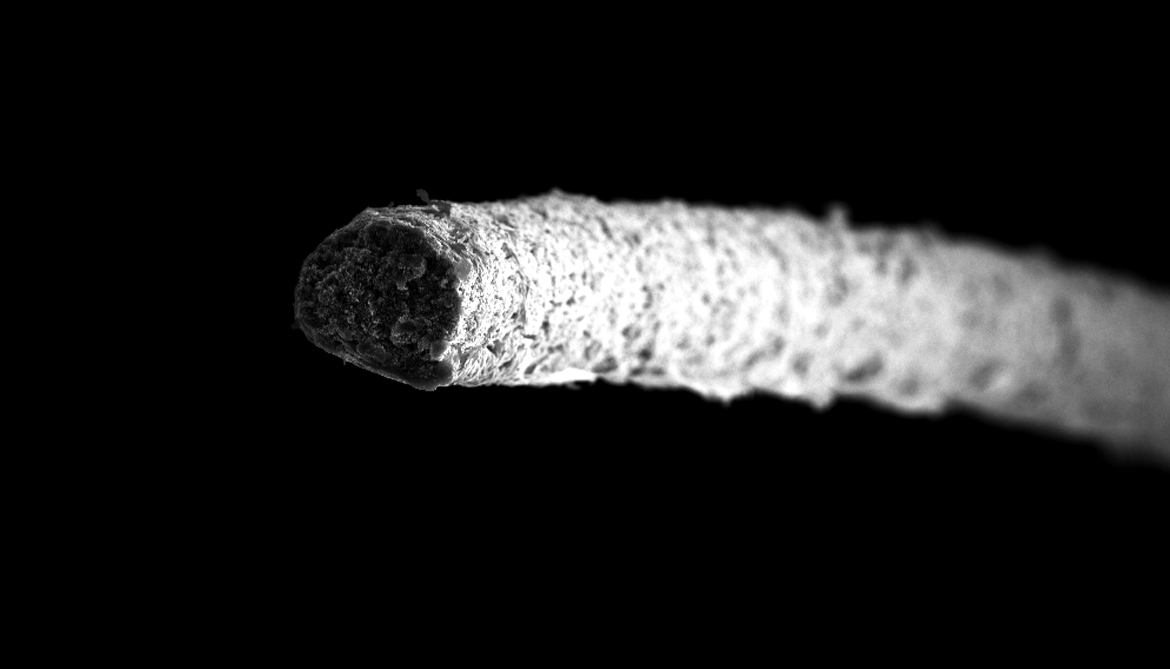 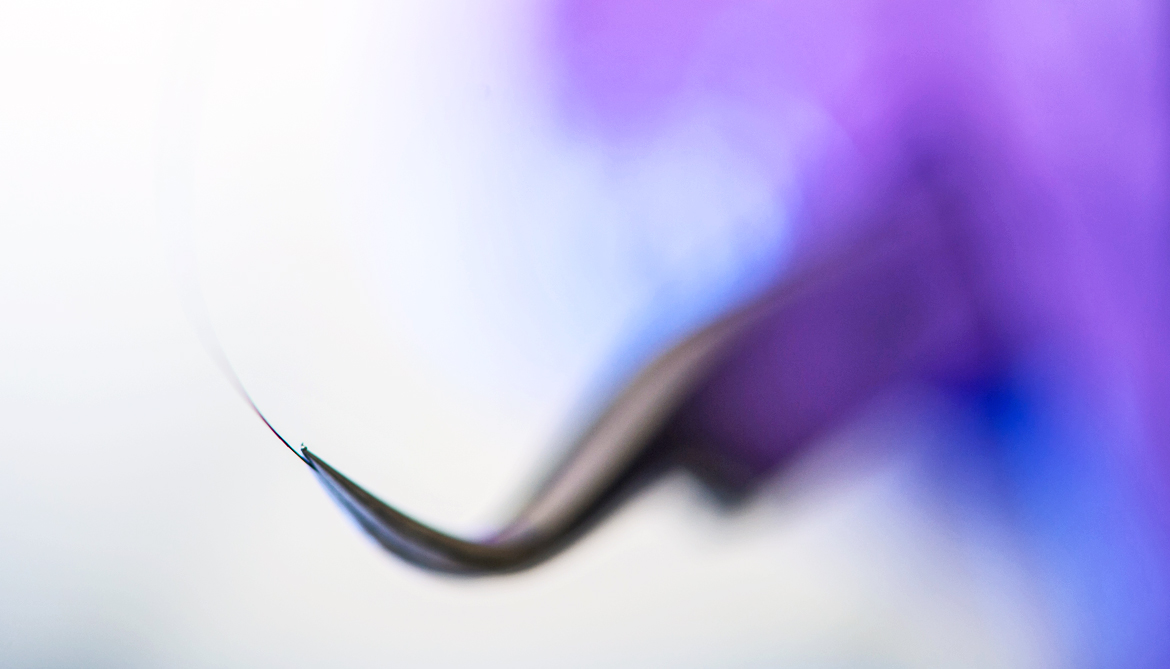 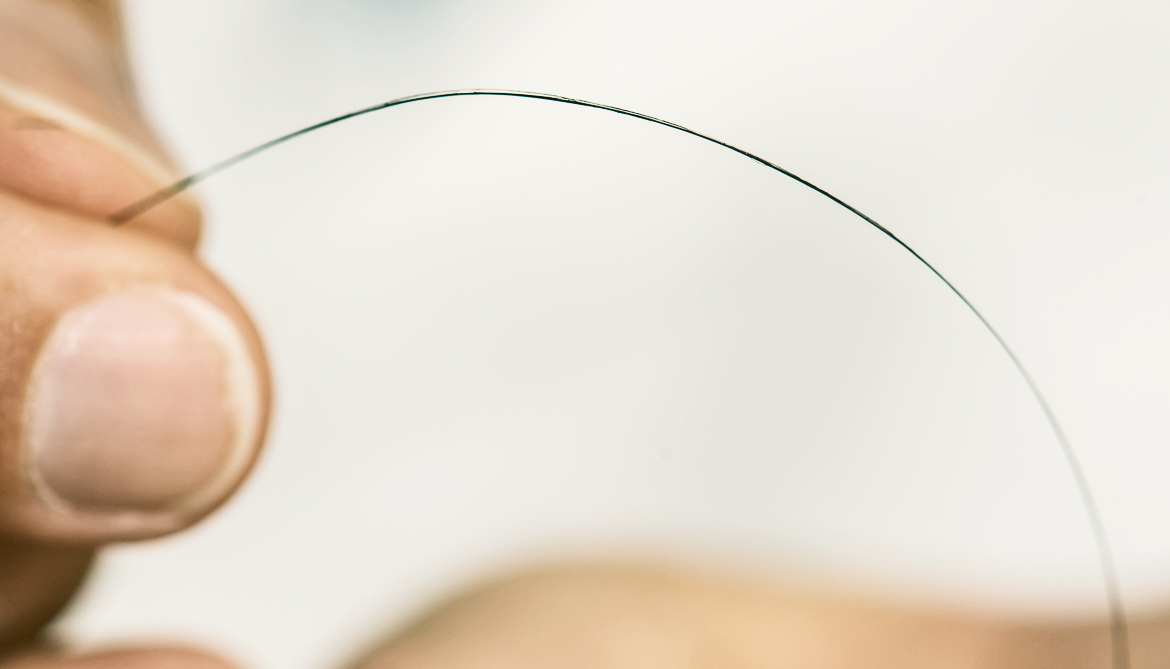 Made into fibers, single-walled carbon nanotubes line up like a fistful of raw spaghetti noodles, thanks to a new process.

The tricky bit, according to Rice University chemist Angel Martí, is keeping the densely packed nanotubes apart before they’re drawn together into a fiber.

Left to their own devices, carbon nanotubes form clumps that are perfectly wrong for turning into the kind of strong, conductive fibers needed for projects ranging from nanoscale electronics to macro-scale power grids.

Earlier research at Rice by chemist and chemical engineer Matteo Pasquali, a coauthor of the new paper, used an acid dissolution process to keep the nanotubes separated until they could be spun into fibers.

Now Martí, Pasquali, and their colleagues are producing “neat” fibers with the same mechanical process, but they’re starting with a different kind of feedstock.

“Matteo’s group used chlorosulfonic acid to protonate the surface of the nanotubes,” Martí says. “That would give them a positively charged surface so they would repel each other in solution. The technique we use is exactly the opposite.”

A process revealed last year by Martí and lead authors Chengmin Jiang, a graduate student, and Avishek Saha, a Rice alumnus, starts with negatively charging carbon nanotubes by infusing them with potassium, a metal, and turning them into a kind of salt known as a polyelectrolyte.

They then employ cage-like crown ethers to capture the potassium ions that would otherwise dampen the nanotubes’ ability to repel one another.

Put enough nanotubes into such a solution and they’re caught between the repellant forces and an inability to move in a crowded environment, Martí says. They’re forced to align—a defining property of liquid crystals—and this makes them more manageable.

The tubes are ultimately forced together into fibers when they are extruded through the tip of a needle. At that point, the strong van der Waals force takes over and tightly binds the nanotubes together, says Martí, an assistant professor of chemistry and bioengineering and of materials science and nanoengineering.

But to make macroscopic materials, Martí’s team needed to pack many more nanotubes into the solution than in previous experiments. “As you start increasing the concentration, the number of nanotubes in the liquid crystalline phase becomes more abundant than those in the isotropic (disordered) phase, and that’s exactly what we needed,” Martí says.

The researchers discovered that 40 milligrams of nanotubes per milliliter gave them a thick gel after mixing at high speed and filtering out whatever large clumps remained. “It’s like a centrifuge together with a rotary drum,” Martí says of the mixing gear. “It produces unconventional forces in the solution.”

Feeding this dense nanotube gel through a narrow needle-like opening produced continuous fiber on the Pasquali lab’s equipment. The strength and stiffness of the neat fibers also approached that of the fibers previously produced with Pasquali’s acid-based process. “We didn’t make any modifications to his system and it worked perfectly,” Martí says.

The hair-width fibers can be woven into thicker cables, and the team is investigating ways to improve their electrical properties through doping the nanotubes with iodide.

“The research is basically analogous to what Matteo does,” Martí says. “We used his tools but gave the process a spin with a different preparation, so now we’re the first to make neat fibers of pure carbon nanotube electrolytes. That’s very cool.”

Pasquali says that the spinning system worked with little need for adaptation because the setup is sealed. “The nanotube electrolyte solution could be protected from oxygen and water, which would have caused precipitation of the nanotubes,” he says.

“It turns out that this is not a showstopper, because we want the nanotubes to precipitate and stick to each other as soon as they exit the sealed system through the needle. The process was not hard to control, adapt, and scale up once we figured out the basic science.”

The Welch Foundation supported the research, which appears in ACS Nano.