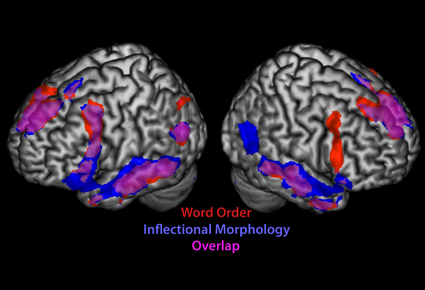 Using MRI to study the brains of native signers of American Sign Language, researchers found that several regions of the brain are involved in processing language. “These results show that people really ought to think of language and the brain in a different way, in terms of how the brain capitalizes on some perhaps preexisting computational structures to interpret language,” says neuroscientist Elissa Newport. (Courtesy: U. Rochester)

U. ROCHESTER (US)—A new study finds there is no single advanced area of the human brain that makes it suited to parse language. Instead, humans rely on several regions, each designed to accomplish different primitive tasks, in order to make sense of a sentence.

Depending on the type of grammar used in forming a given sentence, the brain will activate a certain set of regions to process it, like a carpenter digging through a toolbox to select the right set of tools for the job.

“We’re using and adapting the machinery we already have in our brains,” says study coauthor Aaron Newman, who began the work as a postdoctoral fellow at the University of Rochester and is now a professor at Dalhousie University. “Obviously we’re doing something different [from other animals], because we’re able to learn language unlike any other species. But it’s not because some little black box evolved specially in our brain that does only language, and nothing else.”

The team of brain and cognitive scientists published their findings in the journal Proceedings of the National Academies of Science.

To determine whether different brain regions were used to decipher sentences with different types of grammar, the scientists turned to American Sign Language.

Some languages (English, for example) rely on the order of words in a sentence to convey the relationships between elements. When an English speaker hears the sentence “Sally greets Bob,” it’s clear from the word order that Sally is the subject doing the greeting and Bob is the object being greeted, not vice versa.

Other languages (Spanish, for example) rely on inflections, such as suffixes tacked onto the ends of words, to convey subject-object relationships.

American Sign Language has the helpful characteristic that subject-object relationships can be expressed in either of the two ways—using word order or inflection. A signer can sign the word “Sally” followed by the words “greets” and “Bob” (a construction in which word order dictates meaning), or the signer can use physical inflections such as moving hands through space or signing on one side of the body to convey the relationship between elements.

For the study, the team formed 24 sentences and expressed each of those sentences using both methods.

Videos of the sentences being signed were then played for native signers while researchers used MRI to monitor which areas of the brain were activated when processing the different sentence types.

“These results show that people really ought to think of language and the brain in a different way, in terms of how the brain capitalizes on some perhaps preexisting computational structures to interpret language,” says Elissa Newport, the George Eastman Professor of Brain and Cognitive Sciences at the University of Rochester.

The findings might be helpful in identifying ways to teach language to a person with isolated brain damage, such as a stroke victim.

Researchers from the University of Rochester and the Rochester Institute of Technology contributed to the study.

More news from the University of Rochester: www.rochester.edu/news

Why some Latinos remain wary of the COVID vaccine