WASHINGTON U. – ST. LOUIS (US) — A newly discovered monument reveals the exploits of a sixth-century Maya princess, whose progeny won a bloody struggle between two of the civilization’s most powerful royal dynasties.

Archaeologists made the find while tunneling beneath the main temple of the ancient Maya city of El Perú-Waka’ in northern Guatemala. The intricately carved stone monument with hieroglyphic text, known officially as El Perú Stela 44, offers detailed information about a dark period in Maya history, including the names of two previously unknown Maya rulers and the political realities that shaped their legacies. 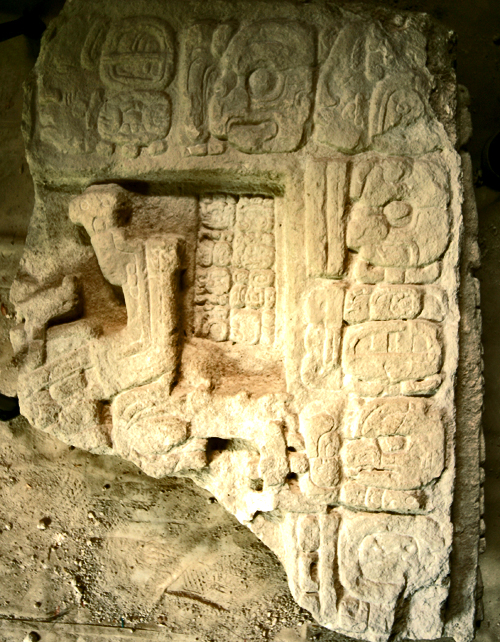 “The narrative of Stela 44 is full of twists and turns of the kind that are usually found in time of war but rarely detected in Precolumbian archaeology.

“The information in the text provides a new chapter in the history of the ancient kingdom of Waka’ and its political relations with the most powerful kingdoms in the Classic period lowland Maya world.”

Carved stone monuments, such as Stela 44, have been unearthed in dozens of other important Maya ruins and each has made a critical contribution to the understanding of Maya culture.

Freidel’s epigrapher, Stanley Guenter, who deciphered the text, believes that Stela 44 was originally dedicated about 1450 years ago, in the calendar period ending in 564 AD, by the Wak dynasty King Wa’oom Uch’ab Tzi’kin, a title that translates roughly as “He Who Stands Up the Offering of the Eagle.”

After standing exposed to the elements for more than 100 years, Stela 44 was moved by order of a later king and buried as an offering inside new construction that took place at the main El Perú-Waka’ temple about 700 AD, probably as part of funeral rituals for a great queen entombed in the building at this time.

El Perú-Waka’ is about 40 miles west of the famous Maya site of Tikal near the San Pedro Martir River in Laguna del Tigre National Park. In the Classic period, this royal city commanded major trade routes running north to south and east to west.

Found in a royal tomb

Early in March 2013, Gautemalan archaeologist Griselda Perez was excavating a short tunnel along the centerline of the stairway of the temple in order to give access to other tunnels leading to a royal tomb discovered in 2012 when her excavators encountered Stela 44.

Once the texts along the side of the monument were cleared, archaeologist Francisco Castaneda took detailed photographs and sent these to Guenter for decipherment.

A new queen, Lady Ikoom, also is featured in the text and she was important to the king who recovered this worn stela and used it again.

Researchers believe that Lady Ikoom was one of two Snake dynasty princesses sent into arranged marriages with the rulers of El Perú-Waka’ and another nearby Maya city as a means of cementing Snake control over this region of Northern Guatemala.

Lady Ikoom was a predecessor to one of the greatest queens of Classic Maya civilization, the seventh-century Maya Holy Snake Lord known as Lady K’abel who ruled El Perú-Waka’ for more than 20 years with her husband, King K’inich Bahlam II.

She was the military governor of the Wak kingdom for her family, the imperial house of the Snake King, and she carried the title “Kaloomte,” translated as “Supreme Warrior,” higher in authority than her husband, the king.

Around 700 AD, Stela 44 was brought to the main city temple by command of King K’inich Bahlam II to be buried as an offering, probably as part of the funeral rituals for his wife, queen Kaloomte’ K’abel.

Last year, the project discovered fragments of another stela built into the final terrace walls of the city temple, Stela 43, dedicated by this king in 702 AD. Lady Ikoom is given pride of place on the front of that monument celebrating an event in 574. She was likely an ancestor of the king.

Freidel and colleagues discovered Lady K’abel’s tomb at the temple in 2012. Located near K’abel’s tomb, Stela 44 was set in a cut through the plaster floor of the plaza in front of the old temple and then buried underneath the treads of the stairway of the new temple.

Stela 44 was originally raised in a period when no stelae were erected at Tikal, a period of more than a century called The Hiatus from 557 until 692 AD. This was a turbulent era in Maya history during which there were many wars and conquests.

Tikal’s hiatus started when it was defeated in battle by King Yajawte’ K’inich of Caracol in Belize, probably under the auspices of the Snake King Sky Witness. The kingdom of Waka’ also experienced a hiatus that was likely associated with changing political fortunes but one of briefer duration from 554 to 657 AD. That period is now shortened by the discovery of Stela 44.

The front of the stela is much eroded, no doubt from more than a century of exposure, but it features a king standing face forward cradling a sacred bundle in his arms. There are two other stelae at the site with this pose, Stela 23 dated to 524 and Stela 22 dated to 554, and they were probably raised by King Chak Took Ich’aak.

The name Chak Took Ich’aak is that of two powerful kings of Tikal and it is likely that this king of Waka’ was named after them and that his dynasty was a Tikal vassal at the time he came to the throne, the research team suggests.

The text describes the accession of the son of Chak Took Ich’aak, Wa’oom Uch’ab Tzi’kin, in 556 AD as witnessed by a royal woman Lady Ikoom who was probably his mother. She carries the titles Sak Wayis, White Spirit, and K’uhul Chatan Winik, Holy Chatan Person.

These titles are strongly associated with the powerful Snake or Kan kings who commanded territories to the north of El Perú-Waka’, which makes it very likely that Lady Ikoom was a Snake princess, Guenter argues.

“We infer that sometime in the course of his reign King Chak Took Ich’aak changed sides and became a Snake dynasty vassal,” Freidel says. “But then, when he died and his son and heir came to power, he did so under the auspices of a foreign king, which Guenter argues from details is the reigning king of Tikal. So Tikal had reasserted command of Waka’ and somehow Queen Ikoom survived this imposition.

“Then in a dramatic shift in the tides of war that same Tikal King, Wak Chan K’awiil, was defeated and sacrificed by the Snake king in 562 AD. Finally, two years after that major reversal, the new king and his mother raised Stela 44, giving the whole story as outlined above.”

Stela 44’s tales of political intrigue and bloodshed are just a few of the many dramatic stories of Classic Maya history that have been recovered through the decipherment of Maya glyphs, a science that has made great strides in the last 30 years, Freidel says.

Freidel and his project staff will continue to study Stela 44 for more clues about the nuances of Maya history. While the text on Stela 44 is only partially preserved, it clearly reveals an important moment in the history of Waka’, he concludes.

The project is sponsored by the Foundation for the Cultural and Natural Patrimony and the US Department of the Interior.