U. PITTSBURGH (US) — New sensor technology could make it possible to diagnose and monitor diabetes through a breath analysis alone, researchers say.

Diabetes patients often receive their diagnosis after a series of glucose-related blood tests in hospital settings, and then have to monitor their condition daily through expensive, invasive methods.

Even before blood tests are administered, people with diabetes often recognize the condition’s symptoms through their breath acetone—a characteristic “fruity” odor that increases significantly during periods of glucose deficiency. Researchers were interested in this biomarker as a possible diagnostic tool. 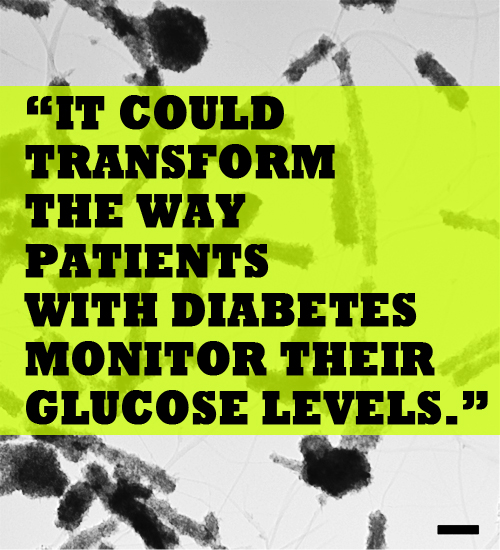 A transmission electron microscopy image of the hybrid material revealing the formation of “titanium dioxide on a stick.” (Credit: University of Pittsburgh)

“Once patients are diagnosed with diabetes, they have to monitor their condition for the rest of their lives,” says Alexander Star, associate professor of chemistry at the University of Pittsburgh.

“Current monitoring devices are mostly based on blood glucose analysis, so the development of alternative devices that are noninvasive, inexpensive, and provide easy-to-use breath analysis could completely change the paradigm of self-monitoring diabetes.”

As described in the Journal of the American Chemical Society, the team combined titanium dioxide—an inorganic compound widely used in body-care products such as makeup—with carbon nanotubes, which acted as “skewers” to hold the particles together. These nanotubes were used because they are stronger than steel and smaller than any element of silicon-based electronics.

This method, which the researchers describe as “titanium dioxide on a stick,” effectively combined the electrical properties of the tubes with the light-illuminating powers of the titanium dioxide. They then created the sensor device by using these materials as an electrical semiconductor, measuring its electrical resistance (the sensor’s signal).

The researchers found the sensor could be activated with light to produce an electrical charge. This prompted them to “cook” the “skewers” in the sensor under ultraviolet light to measure acetone vapors—which they found were lower than previously reported sensitivities.

“Our measurements have excellent detection capabilities,” Star says. “If such a sensor could be developed and commercialized, it could transform the way patients with diabetes monitor their glucose levels.”

The team is currently working on a prototype of the sensor, with plans to test it on human breath samples soon.