Kids from families with lower socioeconomic status have shorter telomeres as adults, which ultimately affects the susceptibility to colds in middle-aged adults, a new study suggests. (Credit: William Brawley/Flickr)

Children and teens from families with lower socioeconomic status may grow up to be more susceptible to the common cold.

Researchers say there’s an association between socioeconomic status during childhood and the length of telomeres later in life. Telomeres are protective cap-like protein complexes at the end of chromosomes, and having shorter telomeres can increase the chances of getting sick.

Telomere length is a biomarker of aging with telomeres shortening with age. As a cell’s telomeres shorten, it loses its ability to function normally and eventually dies. Having shorter telomeres is connected to the early onset of illnesses such as cardiovascular disease and cancer—and predicts susceptibility to acute infectious disease in young to midlife adults. 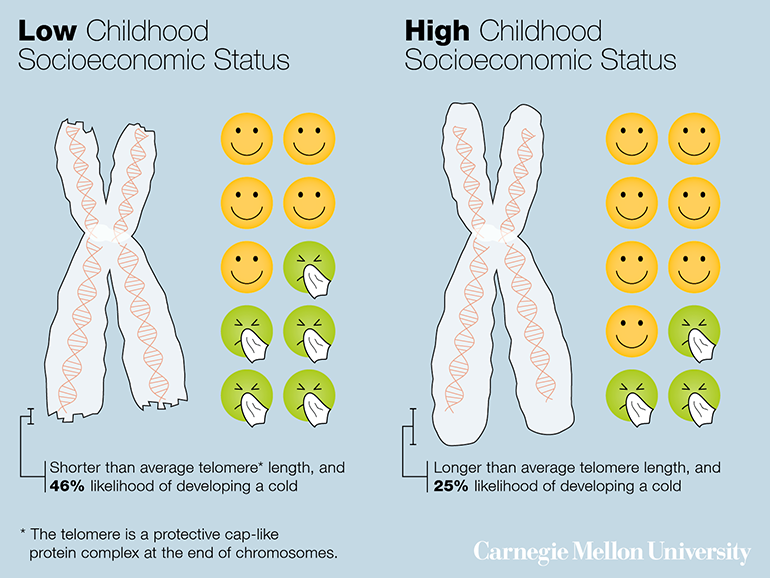 A new study published in the journal Brain, Behavior and Immunity links low childhood socioeconomic status to shorter telomeres and an increased susceptibility to the common cold.

“This provides valuable insight into how our childhood environments can influence our adult health,” says Sheldon Cohen, a psychology professor at Carnegie Mellon University.

In the study, Cohen and his team measured the telomere lengths of white blood cells from 152 healthy volunteers between the ages of 18 and 55. To gauge childhood and current socioeconomic status, the participants reported whether they currently own their home and whether their parents owned the family home when they were between the ages of 1 and 18.

They were then exposed to a rhinovirus, which causes a common cold, and quarantined for five days to see if they actually developed an upper respiratory infection.

The results showed that participants with lower childhood socioeconomic status—indicated by fewer years that their parents were homeowners—had shorter than average telomere length.

Telomere length decreased by 5 percent for each year the participants’ parents did not own a home.

The researchers also found that parental homeownership in both early childhood and adolescence were both associated with adult telomere length.

The participants with lower childhood socioeconomic status were also more likely to become infected by the cold virus. Specifically, for each year their parents did not own a home during their childhood years up to age 18, the participants’ odds of developing a cold increased by 9 percent.

“We have found initial evidence for a biological explanation of the importance of childhood experiences on adult health,” Cohen says. “The association we found in young and midlife adults suggests why those raised by parents of relatively low socioeconomic status may be at increased risk for disease throughout adulthood.”

Even around kids, many gun owners don’t lock up firearms

Teens with a higher sense of family status are healthier

Families of kids with autism face burnout and false accusations