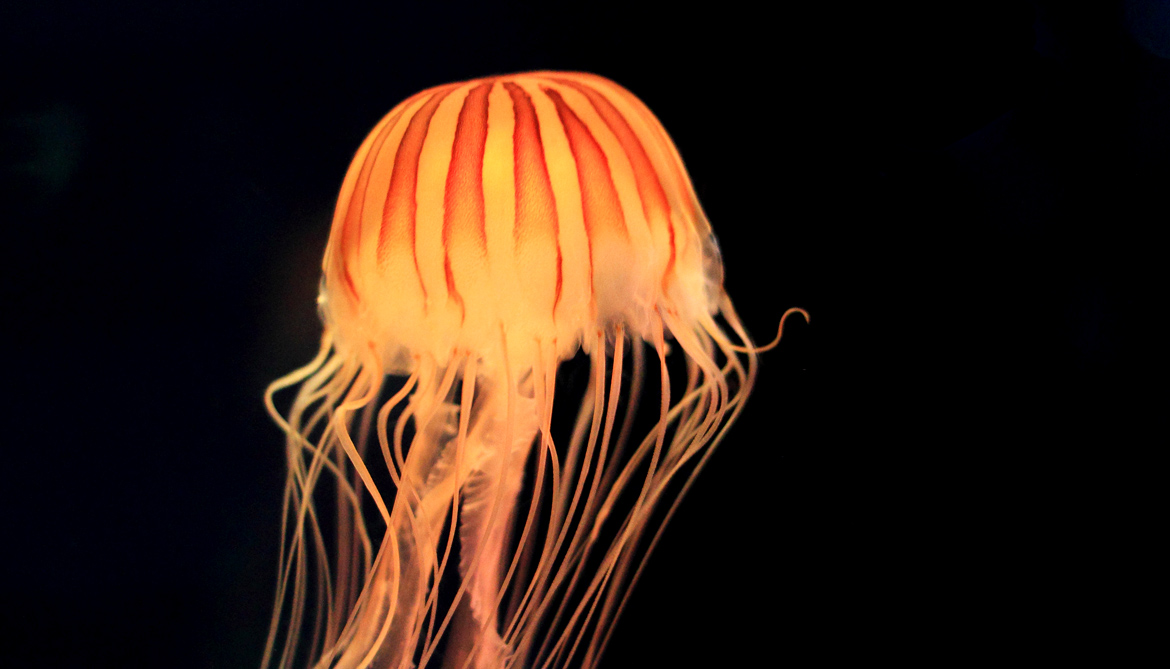 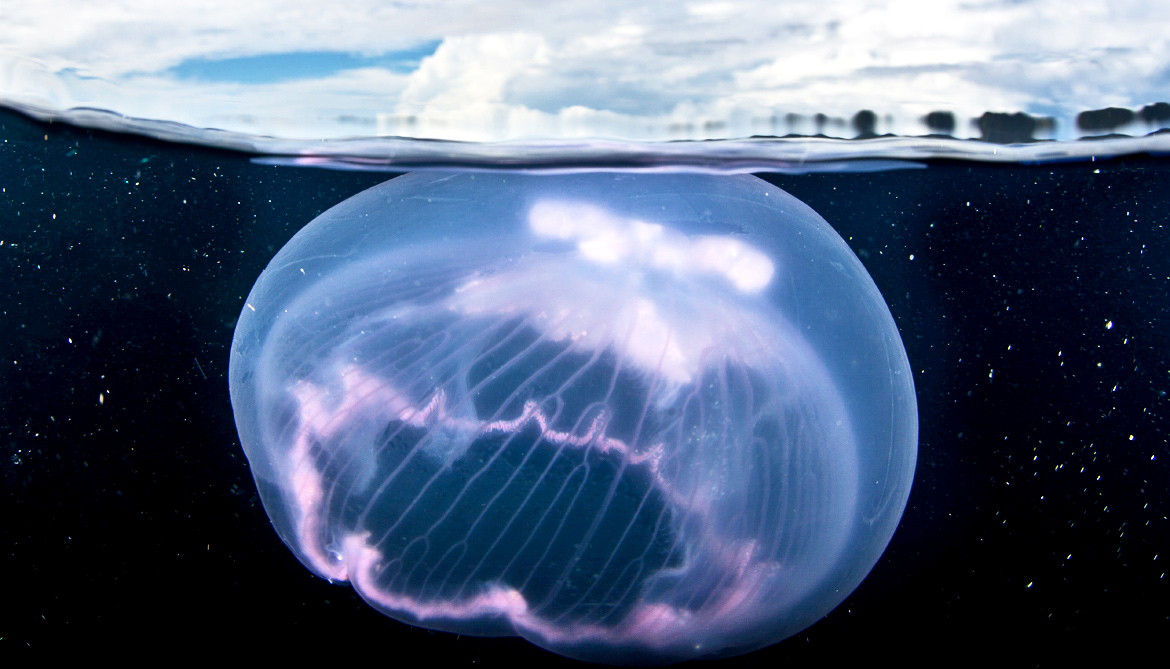 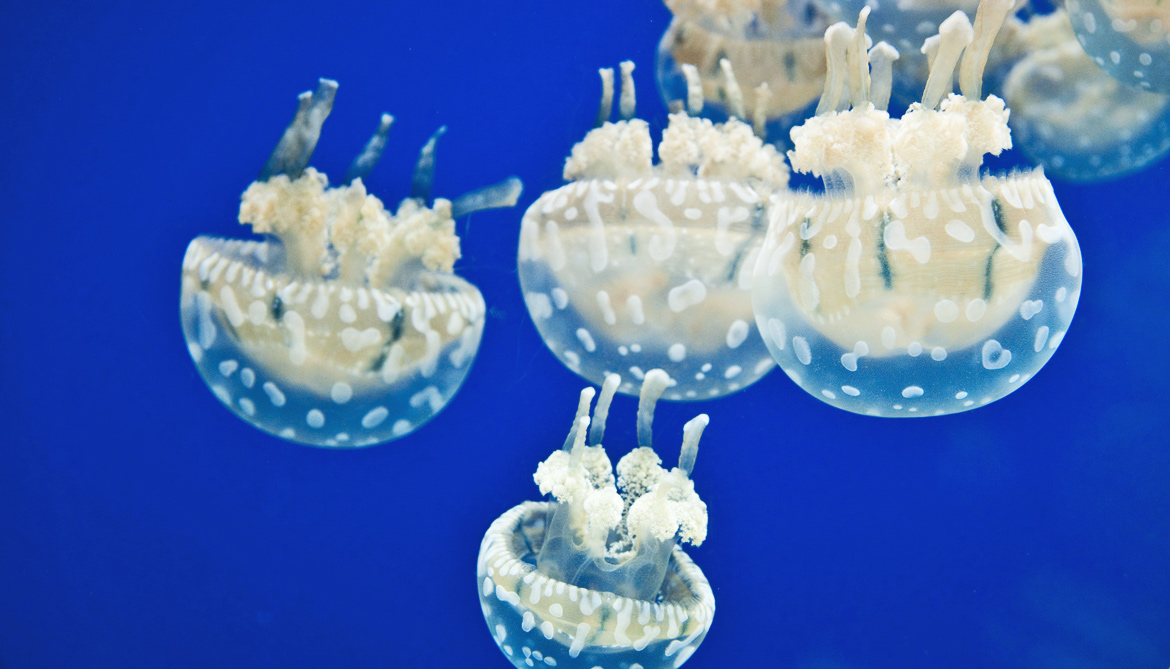 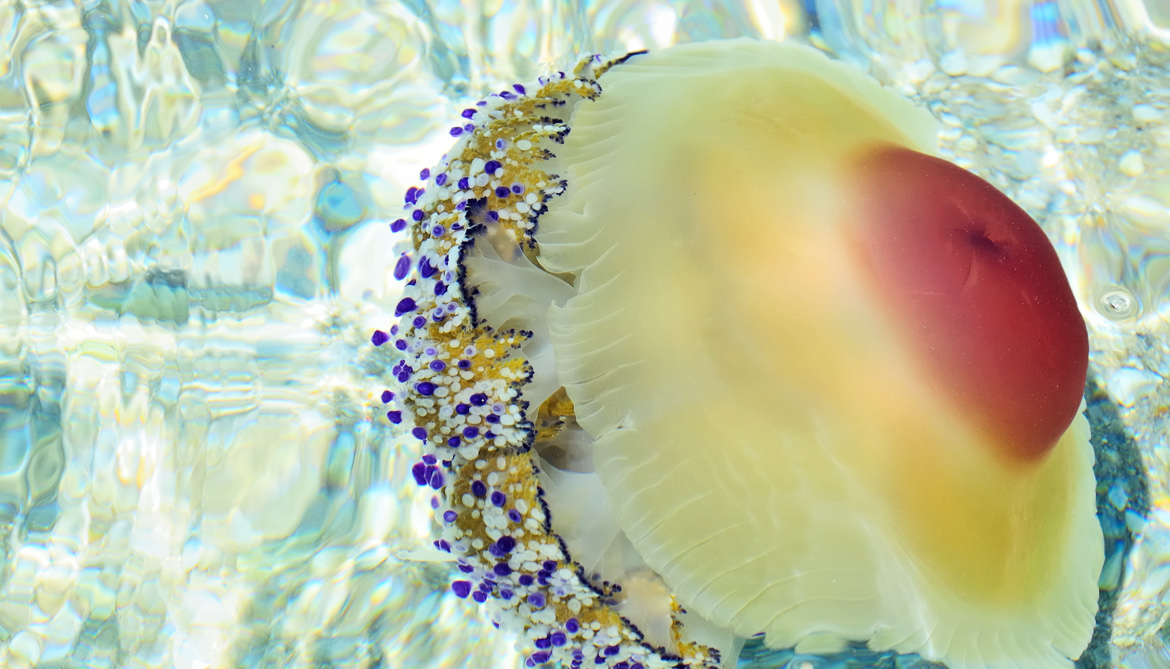 If you cut your finger, your skin can make new cells to heal the wound. If a certain kind of lizard loses its tail, tissue regeneration may produce a new one.

Many marine animals, including some jellyfish, can rapidly regenerate tissues in response to injury, and this trait is important for survival. If a sea turtle takes a bite out of a jellyfish, the injured animal can quickly grow new cells to replace the lost tissue. In fact, a jellyfish-like animal called the hydra is a very commonly used model organism in studies of regeneration.

But Lea Goentoro, assistant professor of biology at Caltech, along with graduate student Michael Abrams and associate research technician Ty Basinger, were interested in another organism, the moon jellyfish (Aurelia aurita).

The trio, lead authors of the study in the Proceedings of the National Academy of Sciences, wanted to know if the moon jellyfish would respond to injuries in the same manner as an injured hydra. The team focused their study on the jellyfish’s juvenile, or ephyra, stage, because the ephyra’s simple body plan—a disk-shaped body with eight symmetrical arms—would make any tissue regeneration clearly visible.

To simulate injury—like that caused by a predator in the wild—the team performed amputations on anesthetized ephyra, producing animals with two, three, four, five, six, or seven arms, rather than the usual eight. They then returned the jellyfish to their habitat of artificial seawater, and monitored the tissue response.

Although wounds healed up as expected, with the tissue around the cut closing up in just a few hours, the researchers noticed something unexpected: the jellyfish were not regenerating tissues to replace the lost arms.

Instead, within the first two days after the injury, the ephyra had reorganized its existing arms to be symmetrical and evenly spaced around the animal’s disk-like body. This so-called resymmetrization occurred whether the animal had as few as two limbs remaining or as many as seven, and the process was observed in three additional species of jellyfish ephyra.

“This is a different strategy of self-repair,” says Goentoro. “Some animals just heal their wounds, other animals regenerate what is lost, but the moon jelly ephyrae don’t regenerate their lost limbs. They heal the wound, but then they reorganize to regain symmetry.”

There are several reasons why symmetry might be more important to the developing jellyfish than regenerating a lost limb. Jellyfish and many other marine animals such as sea urchins, sea stars, and sea anemones have what is known as radial symmetry.

Although the bodies of these animals have a distinct top and bottom, they do not have distinguishable left and right sides—an arrangement, present in humans and other higher life forms, known as bilateral symmetry. And this radial symmetry is essential to how the jellyfish moves and eats, first author Abrams says.

“Jellyfish move by ‘flapping’ their arms; this allows for propulsion through the water, which also moves water—and food—past the mouth,” he says. “As they are swimming, a boundary layer of viscous—that is, thick—fluid forms between their arms, creating a continuous paddling surface. And you can imagine how this paddling surface would be disturbed if you have a big gap between the arms.”

Maintaining symmetry appears to be vital not just for propulsion and feeding, the researchers found. In the few cases when the injured animals do not symmetrize—only about 15 percent of the injured animals they studied—the unsymmetrical ephyra also cannot develop into normal adult jellyfish, called medusa.

The researchers next wanted to figure out how the new self-repair mechanism works. Cell proliferation and cell death are commonly involved in tissue regeneration and injury response, but, the team found, the amputee jellyfish were neither making new cells nor killing existing cells as they redistributed their existing arms around their bodies.

“Symmetrization is a combination of the mechanical forces created by the muscle contractions and the viscoelastic jellyfish body material,” Abrams says. “The cycle of contraction and the viscoelastic response from the jellyfish tissues leads to reorganization of the body. You can imagine that in the absence of symmetry, the mechanical forces are unbalanced, but over time, as the body and arms reorganize, the forces rebalance.”

To test this idea, the team collaborated with coauthor Chin-Lin Guo, from Academia Sinica in Taiwan, to build a mathematical model, and succeeded in simulating the symmetrization process.

In addition to adding to our understanding about self-repair mechanisms, the discovery could help engineers design new biomaterials, Goentoro says.

“Symmetrization may provide a new avenue for thinking about biomaterials that could be designed to ‘heal’ by regaining functional geometry rather than regenerating precise shapes,” she says. “Other self-repair mechanisms require cell proliferation and cell death—biological processes that aren’t easily translated to technology. But we can more easily apply mechanical forces to a material.”

In addition to Abrams, Basinger, Goentoro, and Guo, former SURF student William Yuan from the University of Oxford was also a coauthor. Jellyfish came from the Cabrillo Marine Aquarium and the Monterey Bay Aquarium. John Dabiri, professor of aeronautics and bioengineering, provided discussions and suggestions throughout the study. The Graduate Research Fellowship Program of the National Science Foundation funds Abrams.