U. BUFFALO (US) — Scientists report that prehistoric glaciers reacted rapidly to a brief cold snap, providing a rare glimpse of glaciers’ response to past climate change.

Glaciers on Canada’s Baffin Island expanded rapidly during a brief cold snap about 8,200 years ago, new research shows. The discovery adds to a growing body of evidence showing that ice sheets reacted rapidly in the past to cooling or warming, raising concerns that they could do so again as the Earth heats up.

“One of the questions scientists have been asking is how long it takes for these huge chunks of ice to respond to a global climate phenomenon,” says study co-author Jason Briner, a University at Buffalo associate professor of geology. “People don’t know whether glaciers can respond quickly enough to matter to our grandchildren, and we’re trying to answer this from a geological perspective, by looking at Earth’s history.” 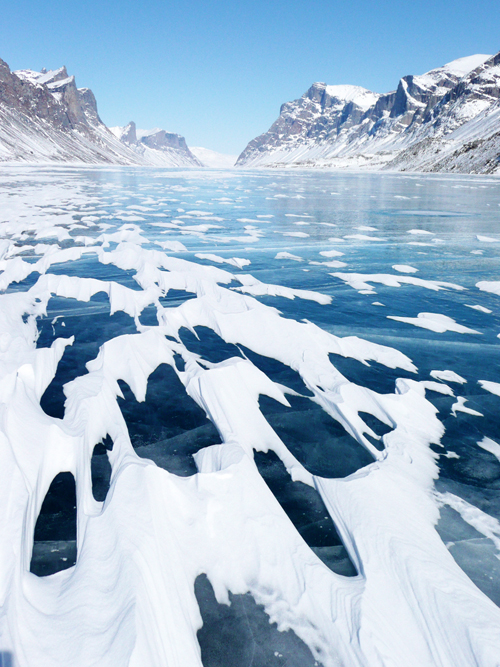 “What we’re seeing,” he adds, “is that these ice sheets are surprisingly sensitive to even short periods of temperature change.”

The research, published in Science, found that mountain glaciers on Baffin Island, along with a massive North American ice sheet, expanded quickly when the Earth cooled about 8,200 years ago.

The finding was surprising because the cold snap was extremely short-lived: The temperature fell for only a few decades, and then returned to previous levels within 150 years or so.

“It’s not at all amazing that a small local glacier would grow in response to an event like this, but it is incredible that a large ice sheet would do the same,” Young says.

To conduct the research, Briner led a team to Baffin Island to read the landscape for clues about the pre-historical size and activity of glaciers that covered the island. Moraines—piles of rocks and debris that glaciers deposit while expanding—provided valuable information.

By dating these and other geological features, the scientists were able to deduce that glaciers expanded rapidly on Baffin Island about 8,200 years ago, a period coinciding with a short-lived cold snap.

The researchers also found that Baffin Island’s glaciers appeared to have been larger during this brief period of cooling than during the Younger Dryas period, a much more severe episode of cooling that began about 13,000 years ago and lasted more than a millennium.

This counterintuitive finding suggests that unexpected factors may govern a glacier’s response to climate change.

With regard to Baffin Island, the study’s authors say that while overall cooling may have been more intense during the Younger Dryas, summer temperatures may have actually decreased more during the shift 8,200 years ago. These colder summers could have fueled the glaciers’ rapid advance, decreasing the length of time that ice melted during the summer.

Detailed analyses of this kind will be critical to developing accurate models for predicting how future climate change will affect glaciers around the world, Briner says.

Briner’s colleagues on the study included lead author Nicolás Young, who worked on the study as part of his PhD at the University at Buffalo and is now a postdoctoral researcher at Columbia University’s Lamont-Doherty Earth Observatory; Dylan H. Rood of the Scottish Universities Environmental Research Centre and the University of California, Santa Barbara; and Robert C. Finkel of UC Berkeley.