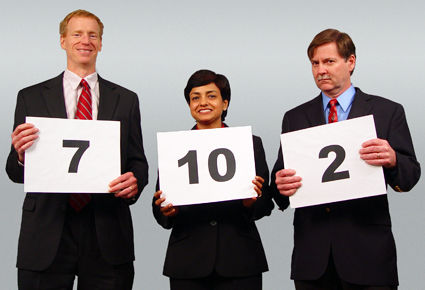 Duke business professors (L-R) John Graham, Manju Puri and Campbell Harvey submit themselves for judgment. Who looks more friendly, or more competent? The trio staged a corporate beauty contest and found that CEOs rated competent just by their appearance tended to have higher income. However, the study shows a CEO’s appearance has no effect on company profitability. (Credit: Duke University’s Fuqua School of Business)

DUKE (US)—By staging a corporate beauty contest, researchers have found that CEOs who appear competent earn more money than less competent-looking CEOs, even though appearance is not associated with measurable differences in company profitability.

Finance professors at Duke University’s Fuqua School of Business paired photos of the CEOs of large and small companies with photos of non-executives with similar facial features, hairstyles, and clothing. They staged a variety of online experiments to ask nearly 2,000 participants to assess the photos.

“Other researchers have found links between beauty and workers’ pay, and demonstrated that politicians benefit from good looks at election time,” says researcher John Graham. “We wanted to see whether appearance also plays a role at the corporate executive level.”

In one experiment, 765 participants were asked to rank the people in each pair of photos according to their attractiveness, competence, trustworthiness, and likeability. The actual CEOs were rated as more competent-looking and more attractive. However, CEOs were more frequently rated as less trustworthy and less likable than the non-CEOs with whom their photos were paired.

Similar results were found when 762 participants were asked to rate CEOs of large firms against CEOs of small firms. Large-firm CEOs were rated as more competent 55 percent of the time, while their small-firm counterparts were judged as looking more trustworthy, likeable, and attractive.

A full report of the team’s finding is available through the National Bureau of Economic Research.

For the purposes of the experiments, only photos of white male CEOs were used. “It would be fascinating to study the role appearance may play in the careers of women and minorities,” says Manju Puri, a finance professor at Duke. “However, because there are fewer female and minority CEOs, including them in our set of photos would have increased the odds of participants recognizing a CEO, which could have inadvertently influenced their rating of the person’s characteristics.”

The team found that CEOs rated competent just by their appearance tended to have higher income. CEOs who were rated four or above on a five-point scale for competence had an average total compensation 7.5 percent higher than CEOs who scored three out of five on competence.

Despite the relationship between appearance and CEO salary, the researchers found no evidence that a CEO’s appearance is related to company profitability.

“I thought the appearance thing was possible for politicians winning elections—but for CEOs, no way,” says Campbell Harvey, also a finance professor at Duke. “We are told that CEOs are very carefully vetted by boards of directors and professional consultants—as they should be for their multi-million dollar jobs. The fact that our research shows that appearance is unquestionably significant turns my stomach.”

“Given there is no relation between appearance and company performance, I hope our research changes the way we select our corporate leaders: ‘looks’ should not be a factor!”

Avoiding expensive colleges due to ‘tuition myopia’ can backfire

Looks aren’t the only advantage of being beautiful

Stereotypes may stifle some harassment claims