U. PENNSYLVANIA (US) — Bioengineers are a step closer to growing new cartilage from a patient’s own stem cells.

Cartilage injuries are difficult to repair. Current surgical options generally involve taking a piece from another part of the injured joint and patching over the damaged area, but this approach involves damaging healthy cartilage, and a person’s cartilage may still deteriorate with age.

“The broad picture is trying to develop new therapies to replace cartilage tissue, starting with focal defects—things like sports injuries—and then hopefully moving toward surface replacement for cartilage degradation that comes with aging,” says Jason Burdick, associate professor of bioengineering at the University of Pennsylvania. “Here, we’re trying to figure out the right environment for adult stem cells to produce the best cartilage.” 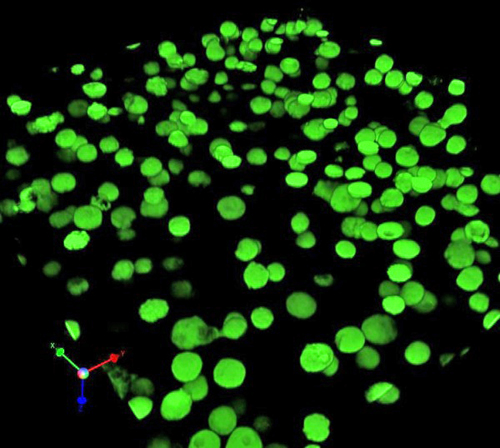 “As we age, the health and vitality of cartilage cells declines,” says Robert Mauck, associate professor of orthopedic surgery, “so the efficacy of any repair with adult chondrocytes is actually quite low.  Stem cells, which retain this vital capacity, are therefore ideal.”

Burdick and colleagues have long studied mesenchymal stem cells, a kind of adult stem cell found in bone marrow that is capable of turning into bone, fat or cartilage cells. His group has been particularly interested in deducing the microenvironmental signals that tell these cells which way to differentiate.

A recent paper investigated conditions that can preferentially coax these stem cells into becoming either fat-like or bone-like cells while encapsulated in hydrogels, polymer networks that simulate some of the environmental conditions in which stem cells naturally grow.

As reported in the Proceedings of the National Academy of Sciences, the first step in growing new cartilage is initiating chondrogenesis, or convincing the mesenchymal stem cells to differentiate into chondrocytes, which in turn generate the spongy matrix of collagen and sugars that cushions joints.

One challenge in prompting this differentiation is that, despite the low density of adult chondrocytes in tissues, the actual formation of cartilage begins with cells in close proximity.

“In typical hydrogels used in cartilage tissue engineering,” Burdick says. “We’re spacing cells apart, so they’re losing that initial signal and interaction. That’s when we started thinking about cadherins, which are molecules that these cells use to interact with each other, particularly at the point they first become chondrocytes.”

To simulate that environment, the researchers used a peptide sequence that mimics these cadherin interactions, which they bound to the hydrogels used to encapsulate the mesenchymal stem cells.

“While the direct link between cadherins and chondrogenesis is not completely understood,” Mauck says, “what’s known is that if you enhance these interactions early during tissue formation, you can make more cartilage, and, if you block them, you get very poor cartilage formation. What this gel does is trick the cell into thinking it’s got friends nearby.”

To test the efficacy of their cadherin-mimicking peptide, the researchers encapsulated mesenchymal stem cells in several other kinds of gels: a regular hydrogel with no peptide; one with a non-functional, scrambled version of the peptide; and one with the peptide as well as an antibody that blocked cadherin interactions.

After a week, cells within gels containing the cadherin peptide exhibited more genetic markers of chondrogenesis than any of the controls.

A second experiment involved growing gels for four weeks, long enough for them to start developing cartilage matrix. This allowed the researchers to conduct functional tests, such as subjecting them to mechanical loads. They found the peptide-containing gels performed more like natural cartilage than the other gels.

The researchers also sectioned the gels and stained them for type-II collagen and chondroitin sulfate, molecules that are part of the cartilage matrix.  Once again, the peptide-containing gels produced more of these markers of matrix formation than the controls.

“All together,” Burdick says, “these experiments provide a thorough demonstration that this cadherin signal can improve the chondrogenesis response when presented from a synthetic hydrogel.”

“Moving forward,” adds Mauck, “it will be important to see how these early cell fate decisions translate into longer term tissue function in vivo.”