Apps with ads use an average of 16 percent more energy—but up to 33 percent more. That lowers the battery life of a smartphone from 2.5 to 2.1 hours on average—or down to 1.7 hours at the high end of energy usage. (Credit: Reid Beels/Flickr)

There’s no such thing as free—especially with smartphone apps, according to a new study.

“Ads in ‘free’ apps drain your phone’s battery faster, cause it to run slower, and use more data,” says William Halfond, co-corresponding author of the study. 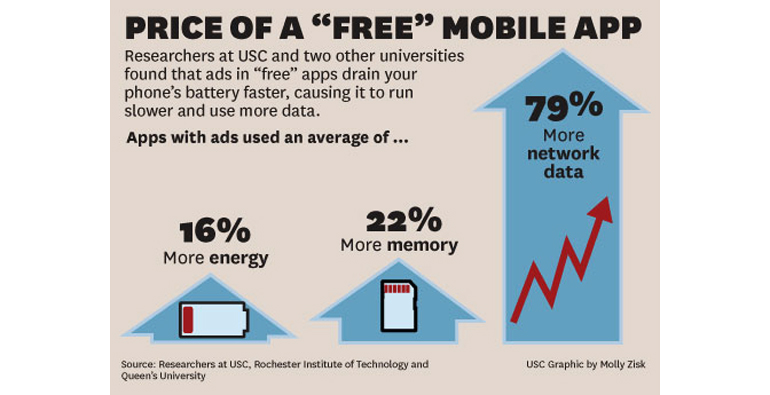 When compared to apps without ads, the researchers found that:

Together, these frustrations and expenses led users to rate apps with ads lower—costing them an overall average of .003 stars on a five-star rating scale.

“In absolute terms, this is very low, but in the crowded and competitive world of apps it’s a huge difference,” Halfond says. “It can make the difference between your app getting downloaded or going unnoticed.”

Halfond’s co-corresponding author on the study is Meiyappan Nagappan of Rochester Institute of Technology. To complete the research, they worked with Stuart Mcilroy of Queen’s University and Jiaping Gui of USC.

The team compared 21 top apps from the past year—culled from a list of 10,750 that had been in the top 400 of each of Google Play’s 30 categories from January to August of last year—then measured their effect on phones using analysis tools loaded onto a Samsung Galaxy SII smartphone.

Next, Halfond says he hopes to create models that will allow app developers to predict how well their products will be received by the public—both with and without ads.

“Apps are the future of software,” he says. “The thought that we’ll all be continuing to consume software on desktops is passé.”

The findings will be presented at the International Conference on Software Engineering (ICSE) in Italy in May.

Try it: Camera checks pulse and breathing via your face