Artist's impression of Lyararapax, one of the species of the world's first predators, the anomalocaridids, chasing its possible prey, primitive fishes that also existed in the Lower Cambrian. (Credit: Nicholas Strausfeld/University of Arizona) 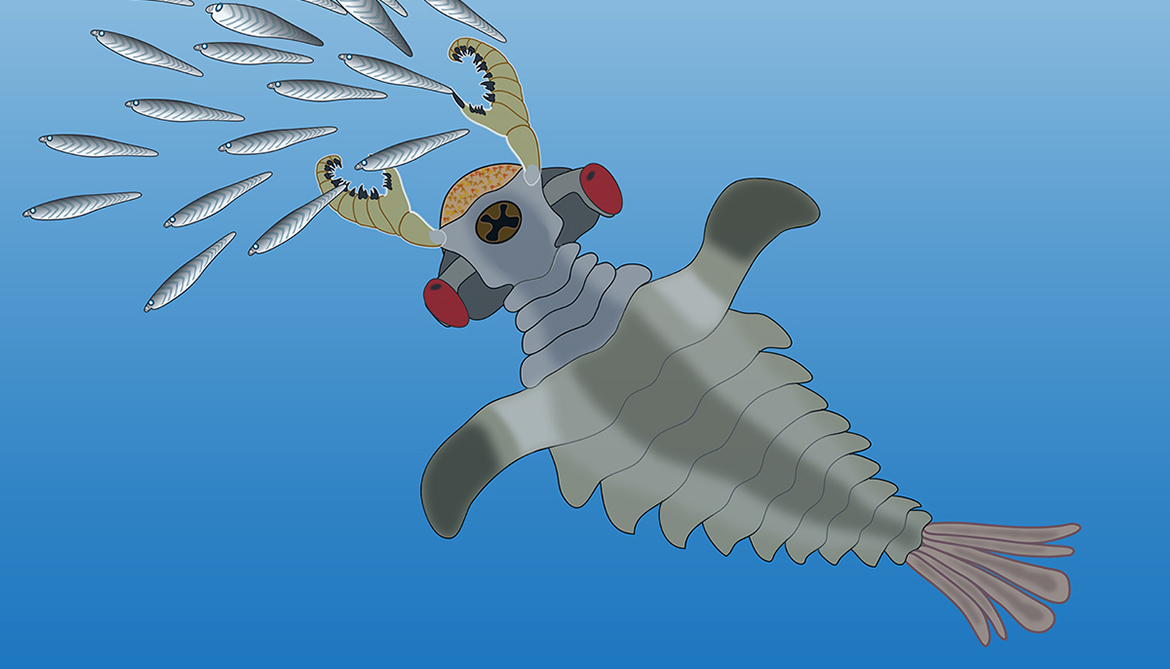 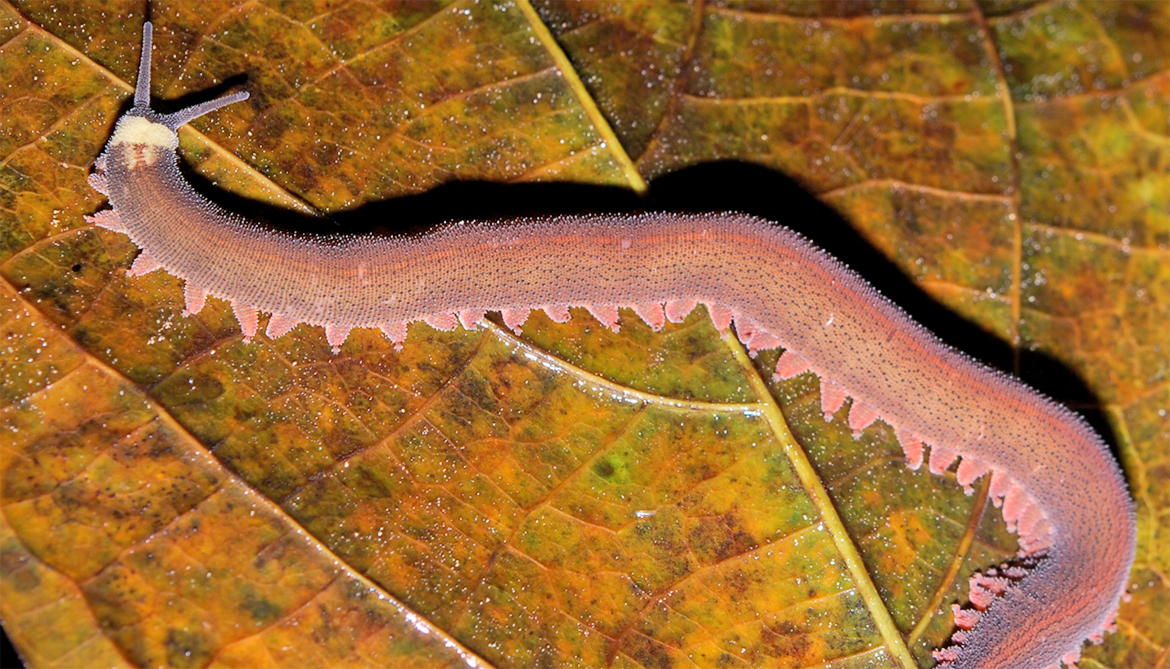 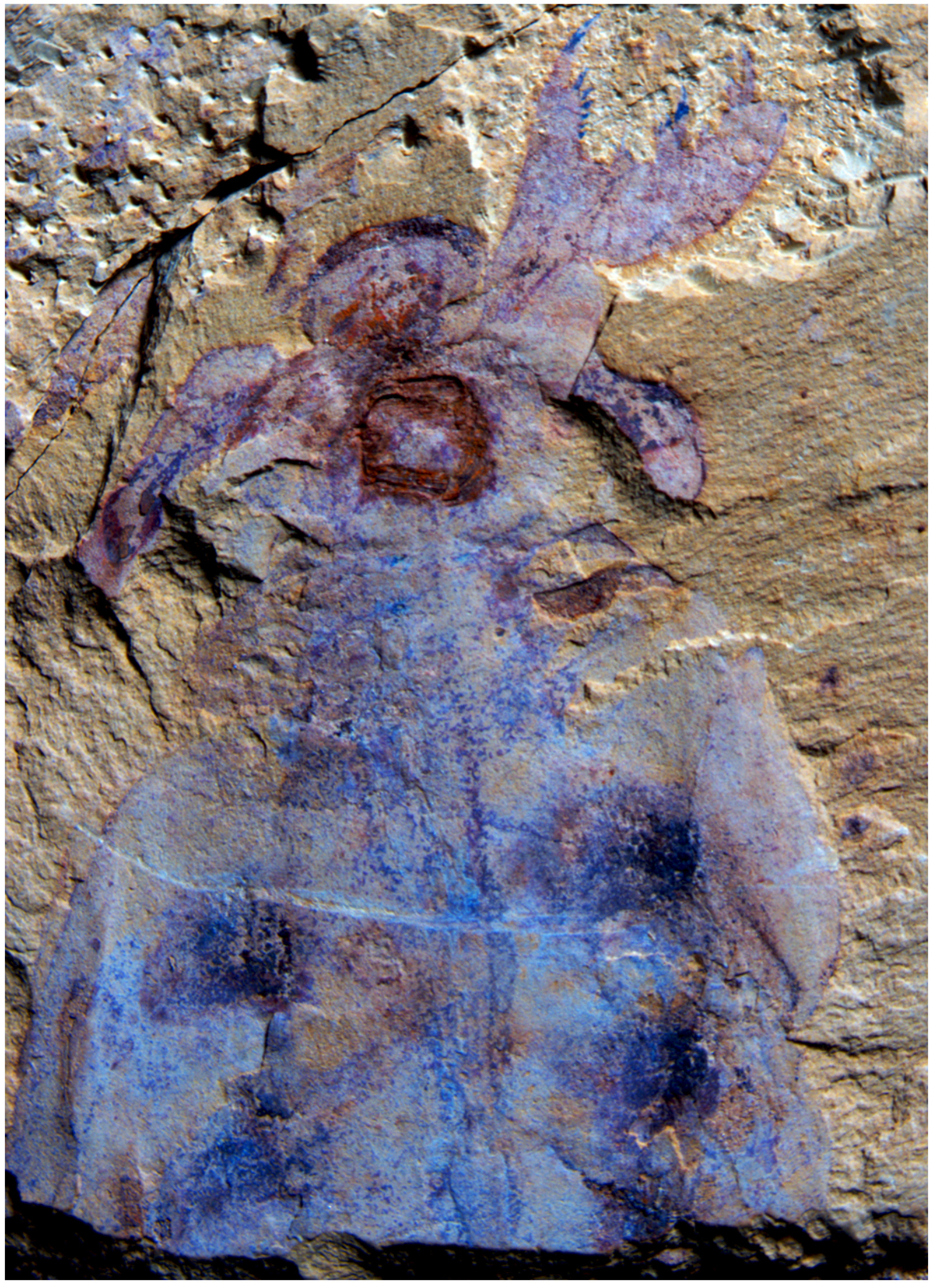 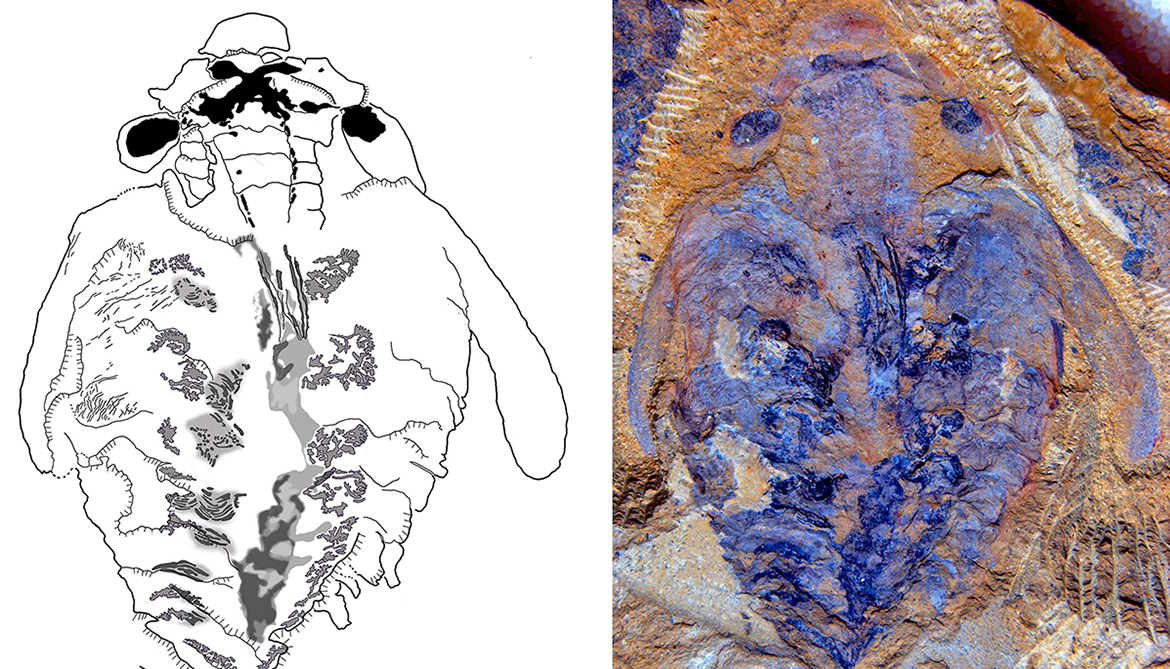 The world’s earliest known predator, which lived about 520 million years ago, had a brain that was far less complex than those found in some of its prey.

Scientists made the discovery by studying a fossilized brain from one of the animals, known as anomalocaridids—which translates to “abnormal shrimp.”

The fierce-looking arthropods were first discovered as fossils in the late 19th century but not properly identified until the early 1980s. They still have scientists arguing over where they belong in the tree of life.

“Our discovery helps to clarify this debate,” says Nicholas Strausfeld, professor of neuroscience at the University of Arizona.

“It turns out the top predator of the Cambrian had a brain that was much less complex than that of some of its possible prey and that looked surprisingly similar to a modern group of rather modest wormlike animals.”

The brain in the fossil is from a new species given the name Lyrarapax unguispinus. Analysis suggests the creatures are related to a branch of animals whose living descendants are known as onychophorans or velvet worms. These wormlike animals are equipped with stubby unjointed legs that end in a pair of tiny claws.

Onychophorans, which are also exclusively predators, grow to no more than a few inches in length and are mostly found in the Southern Hemisphere, where they roam the undergrowth and leaf litter in search of beetles and other small insects. Two long feelers extend from the head, attached in front of a pair of small eyes.

The anomalocaridid fossil resembles the neuroanatomy of today’s onychophorans in several ways, Strausfeld says. Onychophorans have a simple brain located in front of the mouth and a pair of ganglia—a collection of nerve cells—located in the front of the optic nerve and at the base of their long feelers.

“And—surprise, surprise—that is what we also found in our fossil,” Strausfeld says, pointing out that anomalocaridids had a pair of clawlike grasping appendages in front of the eyes.

“These top predators in the Cambrian are defined by just their single pair of appendages, wicked-looking graspers, extending out from the front of their head,” he says. “These are totally different from the antennae of insects and crustaceans. Such frontally disposed appendages are not found in any other living animals with the exception of velvet worms.”

The similarities of their brains and other attributes suggest that the anomalocaridid predators could have been very distant relatives of today’s velvet worms.

“This is another contribution towards the new field of research we call neuropaleontology,” says Xiaoya Ma of the Natural History Museum in London, a coauthor on the paper. “These grasping appendages are a characteristic feature of this most celebrated Cambrian animal group, whose affinity with living animals has troubled evolutionary scientists for almost a century. The discovery of preserved brain in Lyrarapax resolves specific anatomical correspondences with the brains of onychophorans.”

“Being able to directly associate appendages with parts of the brain in Cambrian animals is a huge advantage,” says Gregory Edgecombe, also at the Natural History Museum and another coauthor of the paper that is published in the journal Nature.

“For many years now paleontologists have struggled with the question of how different kinds of appendages in Cambrian fossils line up with each other and with what we see in living arthropods. Now for the first time, we didn’t have to rely just on the external form of the appendages and their sequence in the head to try and sort out segmental identities, but we can draw on the same tool kit we use for extant arthropods—the brain.”

The researchers recently presented evidence of the oldest known fossil of a brain belonging to arthropods related to insects and crustaceans and another belonging to a creature related to horseshoe crabs and scorpions.

“With this paper and our previous reports in Nature, we have identified the three principal brain arrangements that define the three groups of arthropods that exist today,” Strausfeld says. “They appear to have already coexisted 520 million years ago.”

The Lyrarapax fossil was found in 2013 by co-author Peiyun Cong near Kunming in the Chinese province of Yunnan. Coauthors Ma and Edgecombe participated in the analysis, as did Xianguang Hou—who discovered the Chengjiang fossil beds in 1984—at the Yunnan Key Laboratory for Paleobiology at the University of Yunnan.

“Because its detailed morphology is exquisitely preserved, Lyrarapax is amongst the most complete anomalocaridids known so far,” Cong says.

Just over five inches long, Lyrarapax was dwarfed by some of the larger anomalocaridids, which reached more than three feet in length. Paleontologists excavating lower Cambrian rocks in southern Australia found that some anomalocaridids had huge compound eyes, up to 10 times larger than the biggest dragonfly eye, befitting what must have been a highly efficient hunter, Strausfeld says.

The fact that the brain of the earliest known predator appears much simpler in shape than the previously unearthed brains of its contemporaries raises intriguing questions, one of which is whether it is possible that predators drove the evolution of more complex brains.

“With the evolution of dedicated and highly efficient predators, the pressure was on other animals to be able to detect and recognize potential danger and rapidly coordinate escape movements,” Strausfeld says. “These requirements may have driven the evolution of more complex brain circuitry.”