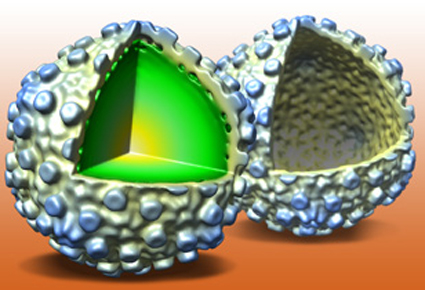 Pictured above is a 3-D reconstruction of bacteriophage lambda with (left) and without (right) DNA. Many viruses, whether they infect bacteria, plants or animals, are adept at packing long stretches of nucleic acid (DNA or RNA) within their nanometer-sized protein shells. Researchers are studying the thermal energy released when DNA is being shot out of the virus. (Courtesy: Carnegie Mellon University)

CARNEGIE MELLON (US)—The energy associated with the expulsion of viral DNA has been measured for the first time in what is believed to be a pivotal discovery toward understanding the mechanisms that control viral infection.

“We are studying the physics of viruses, not the biology of viruses,” says Alex Evilevitch, associate professor of physics in the Mellon College of Science at Carnegie Mellon University.

“By treating viruses as physical objects, we can identify physical properties and mechanisms of infection that are common to a variety of viruses, regardless of their biological makeup, which could lead to the development of broad spectrum antiviral drugs.”

Current antiviral medications are highly specialized, targeting molecules essential to the replication cycle of specific viruses, such as HIV or influenza, thereby limiting the drugs’ use to specific diseases, Evilevitch says.

Additionally, viruses mutate over time and may become less susceptible to the medication.

The current research will provide tools for the rational design of less-specialized antiviral drugs that will have the ability to treat a broad range of viruses by interrupting the release of viral genomes into cells. The study was published in the Journal of Molecular Biology.

The findings also have the potential to improve the development of gene therapy, which uses viruses to deliver functional genes directly to human cells to replace defective genes that are causing disease.

Many viruses, whether they infect bacteria, plants or animals, are adept at packing long stretches of nucleic acid (DNA or RNA) within their nanometer-sized protein shells.

In many of the viruses that contain double-stranded DNA, the DNA gets packaged so tightly that it bends upon itself, resulting in repulsive forces that exert a tremendous amount of pressure on the virus’s outer shell, indicating a great amount of stored energy.

At the moment of infection, when the DNA is being shot out of the virus, the energy stored in the tightly packed DNA is released and converted into thermal energy.

The researchers used an experimental technique known as isothermal titration calorimetry (ITC) to directly measure the heat, and thus the thermal energy, released during viral genome ejection, which is the same as the stored internal energy that results from genome packaging.

The results show that the heat released increases as DNA length increases.

Ordering water molecules around DNA strands inside the virus (called hydration entropy) also was found to have a tremendous influence on the build up of energy. This unpredicted effect was not accounted for in the previous models.

“In this study, we looked at viruses that infect bacteria, called bacteriophages, as an experimental model system, but ITC can also be applied to other types of viruses,” Evilevitch says, who notes that the team is currently using the technique to investigate the rotavirus, which causes stomach flu.

“Understanding the energy profile for viral genome release provides information on how to interfere with the process,” he adds. “For example, developing ways to decrease the internal energy in viruses could prevent viruses from ejecting their genome and prevent infection,” Evilevitch says.