RUTGERS (US) — Gender differences in the brain may explain why women and men often react differently to stress.

Researchers studied the brains of male and female rats, focusing on two regions known to play a role in learning and stress: the amygdala and the prefrontal cortex. The amygdala, a small almond-shaped structure located deep within the brain, senses stressful situations. The prefrontal cortex, in the front of the brain, is necessary for higher cognitive functions.

“These two structures are intimately connected to one another,” says Tracey Shors, a professor of psychology at Rutgers, who is lead author of the study reported in the Journal of Neuroscience. “Therefore, we examined whether they communicate with one another to influence learning after stress.”

The researchers exposed male and female rats to stress, and then presented them with an associative learning task. During training, the rats learned to associate one event with another that occurred later in time. They played a tone and later stimulated the rats’ eyelids to elicit a blink. 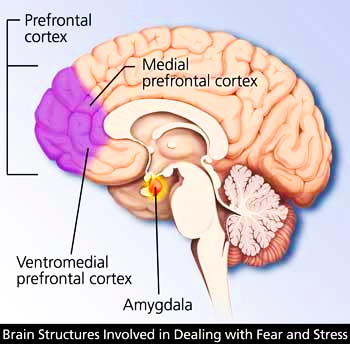 After the stimulus was taken away, most of the male rats responded to the tone by blinking on their own. Most of the females, however, did not blink in response to the tone, indicating that they had failed to learn that association. But the research also contained a neurological surprise.

When Shors and her colleagues disrupted the connections between the prefrontal cortex and the amygdala in some of the females, those females were able to learn the association.

Shors says sex differences in the brain may explain why women are so sensitive to stress, and why they are more likely to suffer from stress-related diseases such as depression and post-traumatic stress disorder (PTSD).

“Given these data, maybe we should consider these gender differences when we design treatments for such disorders,” Shors adds.

The pandemic has people stuck in a bad mental/physical loop