U. PITTSBURGH (US) — Amphibians exposed to insecticides early in life—even those not yet hatched—have a higher tolerance to those same insecticides years later.

Wood frog populations residing farther from agricultural fields are not very tolerant to a particular type of insecticide, but they can become more tolerant with early exposure, new research shows.

“This is the first study to show that tadpole tolerance to insecticides can be influenced by exposure to insecticides extremely early on in life—in this case, as early as the embryonic stage,” says Rick Relyea, professor of biological sciences at the University of Pittsburgh. 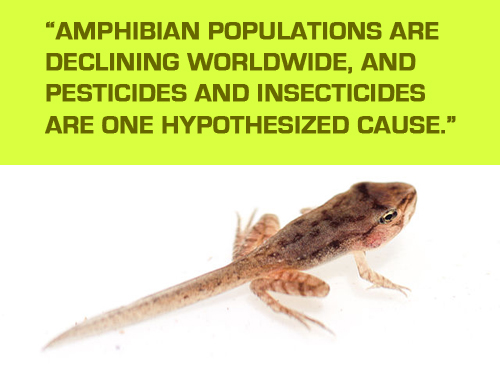 “So this discovery has promising implications for the persistence of amphibian populations,” says Jessica Hua. (Credit: Brian Gratwicke/Wikimedia Commons)

“Amphibian populations are declining worldwide, and pesticides and insecticides are one hypothesized cause,” says Jessica Hua, lead author of the paper and a PhD candidate studying biological sciences in Relyea’s laboratory. “So this discovery has promising implications for the persistence of amphibian populations.”

For the study, published in Evolutionary Applications, researchers examined three potential factors that might allow larval wood frogs to have a high tolerance to the insecticide: the concentration of the initial insecticide exposure, the timing of the exposure, and the population’s history of exposure.

They chose to work with carbaryl, a popular household insecticide that also is used for malaria prevention.

The researchers conducted experiments with both embryos and hatchlings that were collected as newly laid eggs from four Pennsylvania ponds—two near agricultural fields and two farther away.

Next, the team wanted to observe whether insecticide tolerance played a role in the frogs’ acetylcholinesterase (AChE), a key enzyme in the nervous system of animals. Carbaryl is known to bind itself to this AChE enzyme in frogs, causing their nervous systems to slow.

The team measured the concentration of total tadpole AChE in a sample of tadpole bodies, finding that low exposure levels of carbaryl stimulated the tadpoles to produce greater amounts of the enzyme—making them more tolerant to the insecticide later in life.

They are now examining whether exposure to an insecticide early in life can make amphibians more tolerant to other insecticides.

Wild turtles age slowly. Some basically don’t age at all