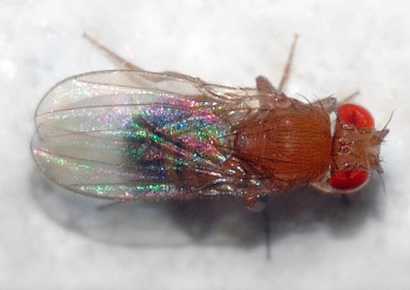 Scientists have found emotion-like behaviors driven by the neurotransmitter dopamine in the fruit fly Drosophila melanogaster (above). The finding may provide new insights into the neurological basis of ADHD, learning deficits, and more. The Drosophila brain has long been considered a powerful system with which to study the genetic basis of learning and memory. What hasn’t been clear is whether the Drosophila brain also could be used to study the genetic basis of “emotional” behaviors. (Credit: André Karwath/Wikimedia Commons)

CALTECH (US)—Researchers have uncovered evidence of a primitive emotion-like behavior in the fruit fly Drosophila melanogaster. The findings may be relevant to the relationship between the neurotransmitter dopamine and attention deficit hyperactivity disorder (ADHD).

Details of the study by scientists at the California Institute of Technology (Caltech) are described in the December issue of the journal Neuron.

The Drosophila brain contains only about 20,000 neurons and has long been considered a powerful system with which to study the genetic basis of behaviors such as learning and courtship, as well as memory and circadian rhythms. What hasn’t been clear is whether the Drosophila brain also could be used to study the genetic basis of “emotional” behaviors.

“Such studies are important,” says David Anderson, Caltech’s Seymour Benzer Professor of Biology and a Howard Hughes Medical Institute investigator, “because it’s believed that abnormalities in these types of behaviors may underlie many psychiatric disorders.”

Most of the genes found in the fruit fly—more accurately referred to as the vinegar fly—are found in humans as well, including those neurons that produce brain chemicals like dopamine and serotonin, which have been implicated in psychiatric disorders.

In their Neuron paper, the research team—led by postdoctoral fellow Tim Lebestky—found that a series of brief but brisk air puffs, delivered in rapid succession, caused flies to run around their test chamber in what Anderson calls a “frantic manner.” This behavior persisted for several minutes after the last of the puffs.

“Even after the flies had ‘calmed down,'” he adds, “they remained hypersensitive to a single air puff.”

To quantify the flies’ behavior, Anderson’s group collaborated with Pietro Perona, the Allen E. Puckett Professor of Electrical Engineering at Caltech. Together with his students, Perona developed an automated machine-vision-based system to track the movement of the flies, and derived a simple mathematical model to fit the movement data and to extract metrics that described various aspects of the flies’ responses under different conditions.

The researchers used this test to search for flies with an abnormally exaggerated hyperactivity response; genetic studies of these flies revealed that a mutation in a dopamine receptor (a mutation that eliminates the receptor) produced the aberrant behavior. Flies with this dopamine-receptor mutation were hypersensitive to the air puffs, and took much longer to calm down than did “normal” flies without the mutation.

What is surprising about this result, notes Lebestky, “is that previous studies in both flies and vertebrates had suggested that dopamine promotes activity, but our experiments uncovered a function of dopamine in the opposite direction.” Because removing the receptor causes hypersensitivity to the air puffs, these results “suggested that dopamine actively inhibits the hyperactivity response,” Lebestky says.

This observation suggested a possible link to ADHD, a behavioral disorder characterized by impulsivity, hyperactivity, and short attention span. Humans with the disorder often take drugs, such as Ritalin, that increase levels of brain dopamine in order to reduce hyperactivity.

The ways the mutant flies respond to the air puffs is, moreover, “reminiscent of the way in which individuals with ADHD display hypersensitivity to environmental stimuli and are more easily aroused by such influences,” says Anderson. Importantly, ADHD has been genetically linked to abnormalities of the dopamine system in humans, further strengthening the analogy between the mutant flies and this psychiatric disorder.

There is also another possible link: some individuals with ADHD display learning disabilities. Similarly, researchers from Pennsylvania State University—who collaborated on the Neuron study—have shown previously that flies with the same dopamine receptor mutation are unable to learn to associate a particular odor with an electric shock, and do not avoid the odor when subsequently tested. (Flies without the mutation quickly learn to make the association.)

It is often assumed that because individuals with ADHD are hyperactive and easily distracted, they have difficulty learning. The Caltech group showed, however, that hyperactivity and learning disabilities are not causally related in flies bearing the dopamine receptor mutation, thereby disproving the theory—at least in flies.

“We could separately ‘rescue’ the hyperactivity and learning deficits in a completely independent manner,” says Anderson, “by genetically restoring the dopamine receptor to different regions of the fly’s brain.”

Thus, in dopamine-receptor-mutant flies, hyperactivity does not seem to cause learning deficits. Instead, these two “symptoms” reflect independent effects of the mutation that manifest themselves in distinct brain regions. “Being able to observe and manipulate the different neural substrates for learning and arousal will hopefully give us a unique method for identifying new molecular pathways that could be investigated and validated in higher organisms,” says Lebestky.

This finding in flies, notes Anderson, raises the possibility that hyperactivity and learning deficits also may not be causally linked in humans with ADHD. If so, he says, it ultimately may prove more effective to develop drugs to treat these two symptoms separately, rather than trying to cure them both with the broad-spectrum pharmaceuticals currently available, which have many undesirable side effects.

“The finding that flies exhibit emotion-like behaviors that are controlled by some of the same brain chemicals as in humans opens up the possibility of applying the powerful genetics of this ‘model organism’ to understanding how these chemicals influence behavior through their actions on specific brain circuits,” says Anderson. “While the specific details of where and how this occurs are likely to be different in flies and in humans, the basic principles are likely to be evolutionarily conserved, and may aid in our understanding of what goes wrong in disorders such as ADHD.”

The research team included scientists from Caltech, Pennsylvania State University, and the University of California, San Francisco. Their work was funded by grants from the National Science Foundation and the Howard Hughes Medical Institute.

Sour things reveal commonality between us and flies

Kids can sniff out an insincere apology