"Our findings suggest that the caudate region of the canine brain behaves similarly to the caudate of the human brain, under similar circumstances," says Gregory Berns. (Credit: "weimeraner" via Shutterstock) 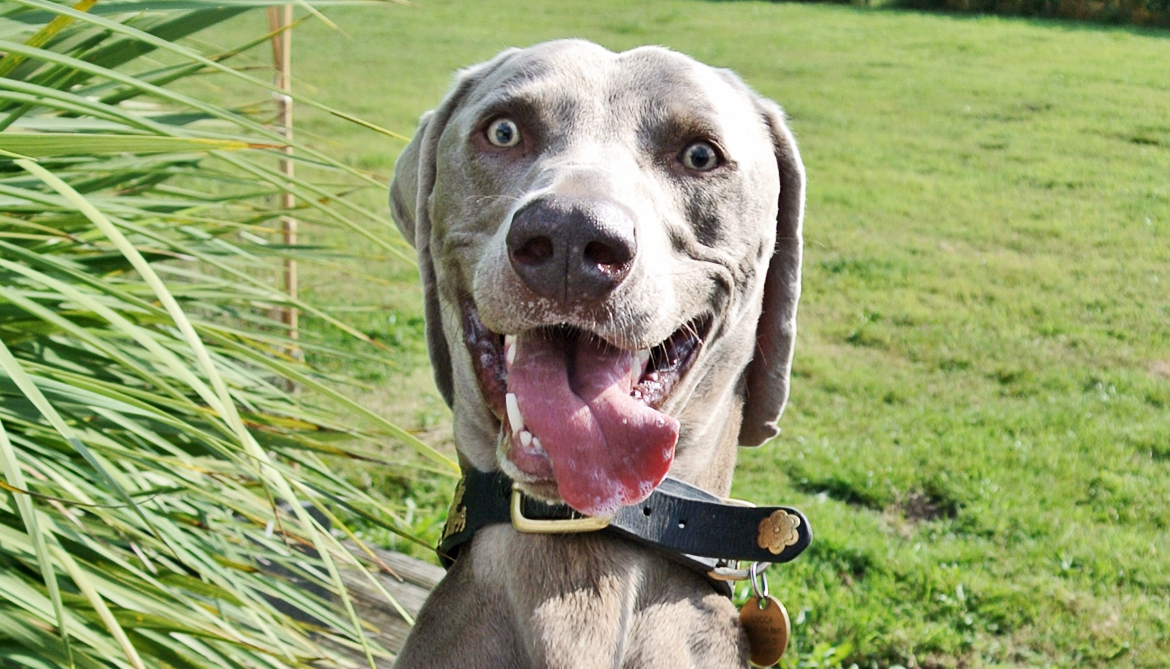 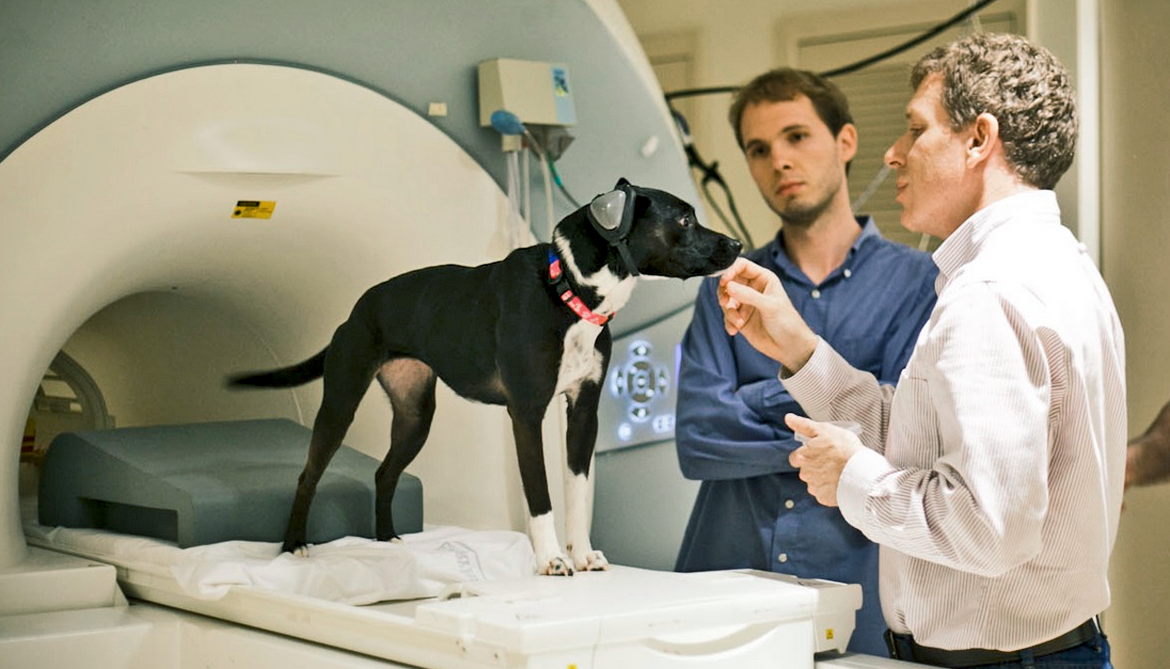 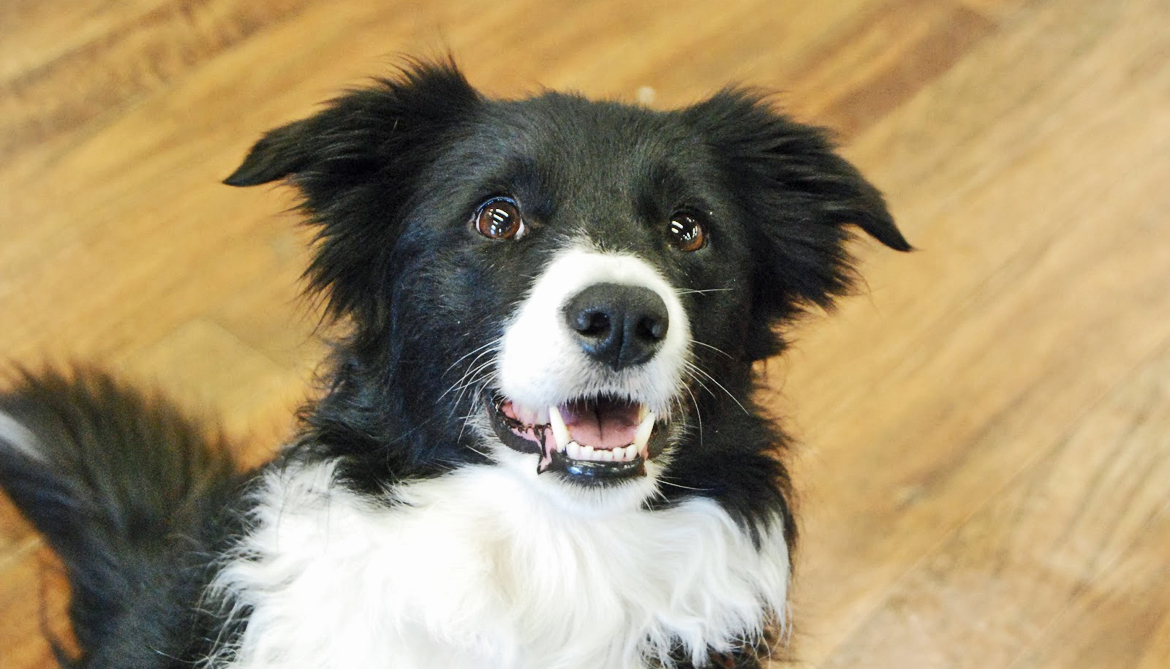 After capturing the first brain images of two alert, unrestrained dogs last year, researchers have confirmed their methods and results by replicating them in an experiment involving 13 dogs.

The research, published in PLOS ONE, shows that most of the dogs had a positive response in the caudate region of the brain when given a hand signal indicating they would receive a food treat, as compared to a different hand signal for “no treat.”

“Now we’ve shown that the initial study wasn’t a fluke: Canine fMRI is reliable and can be done with minimal stress to the dogs. We have laid the foundation for exploring the neural biology and cognitive processes of man’s best, and oldest, friend.”

Both the initial experiment and the more recent one involved training the dogs to acclimatize to an fMRI machine. The task requires dogs to cooperatively enter the small enclosure of the fMRI scanner and remain completely motionless despite the noise and vibration of the machine.

The most recent experiment involved the original two dogs, plus 11 additional ones, of varying breeds. Eight out of the 13 showed the positive caudate response for the hand signal indicating they were going to receive a hot dog.

The caudate sits above the brain stem in mammals and has the highest concentration of dopamine receptors, which are implicated in motivation and pleasure, among other neurological processes.

“We know that in humans, the caudate region is associated with decision-making, motivation, and processing emotions,” Berns says.

As a point of reference, the researchers compared the results to a similar experiment Berns had led 10 years previously involving humans, in which the subjects pressed a button when a light appeared, to get a squirt of fruit juice.

Six of the dogs involved in the experiment had been specially bred and trained to assist disabled people as companion animals, and two of the dogs (including one of the service dogs) had worked as therapy dogs, used to help alleviate stress in people in hospitals or nursing homes. All of the service/therapy dogs showed a greater level of positive caudate activation for the hot dog signal, compared to the other dogs.

“We don’t know if the service dogs and therapy dogs showed this difference because of genetics, or because of the environment in which they were raised, but we hope to find out in future experiments,” Berns says. “This may be the first hint of how the brains of dogs with different temperaments and personalities differ.”

He adds: “I don’t think it was because they liked hot dogs more. I saw no evidence of that. None of the dogs turned down the hot dogs.”

One limitation of the experiments is the small number of subjects and the selectivity of the dogs involved, since only certain dogs can be trained to do the experiments, Berns says.

“We’re expanding our cohort to include more dogs and more breeds,” Berns says. “As the dogs get more accustomed to the process, we can conduct more complicated experiments.”

Plans call for comparing how the canine brain responds to hand signals coming from the dog’s owner, a stranger and a computer. Another experiment already under way is looking at the neural response of dogs when they are exposed to scents of members of their households, both humans and other dogs, and unfamiliar humans and dogs.

“Ultimately, our goal is to map out canine cognitive processes,” says Berns, who recently published a book entitled How Dogs Love Us: A Neuroscientist and His Adopted Dog Decode the Canine Brain.

Even in an increasingly technical era, the role of dogs has not diminished, Berns says. In addition to being popular pets, he notes that dogs are important in the US military, in search-and-rescue missions, as assistants for the disabled, and as therapeutic stress-relievers for hospital patients and others.

“Dogs have been a part of human society for longer than any other animal,” Berns says. He cites a genetic analysis recently published in Science suggesting that the domestication of dogs goes back 18,000 to 32,000 years, preceding the development of agriculture some 10,000 years ago.

“Most neuroscience studies on animals are conducted to serve as models for human disease and brain functions,” Berns says. “We’re not studying canine cognition to serve as a model for humans, but what we learn about the dog brain may also help us understand more about how our own brains evolved.”