Above, a group of Devils Hole pupfish in the Ash Meadows Fish Conservation Facility in Amargosa Valley, Nevada. These individuals hatched from eggs removed from Devils Hole in November 2013. Males with the blue tint court the olive-colored females. Eggs are deposited on the yarn "spawning mops." (Credit: Olin Feuerbacher/USFWS) 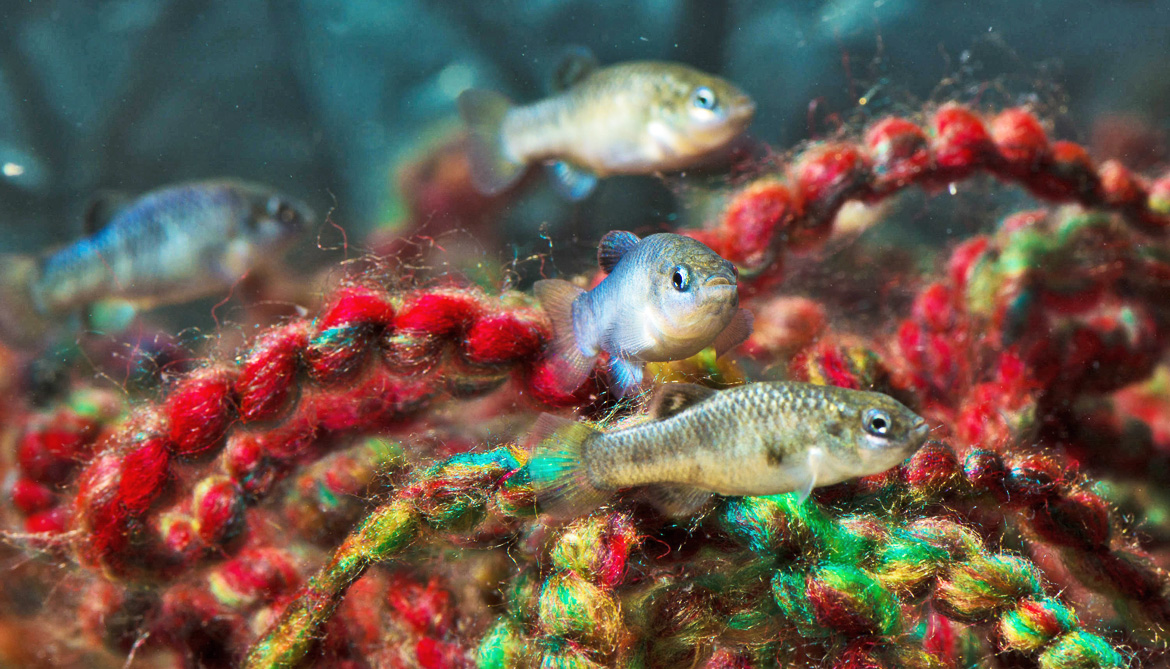 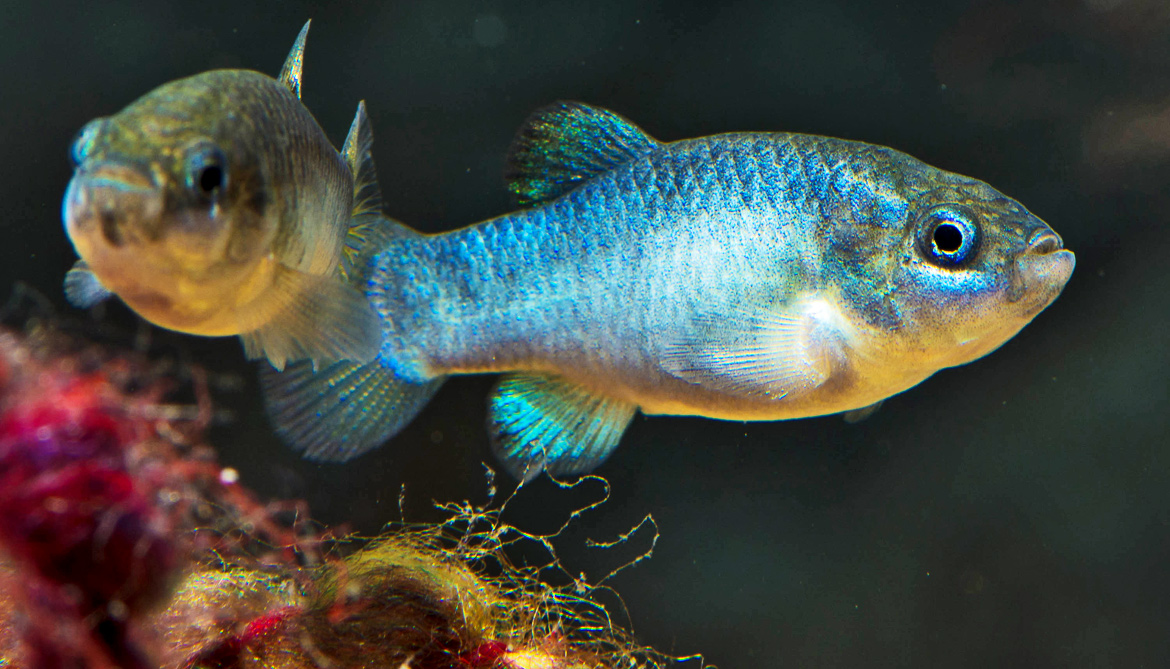 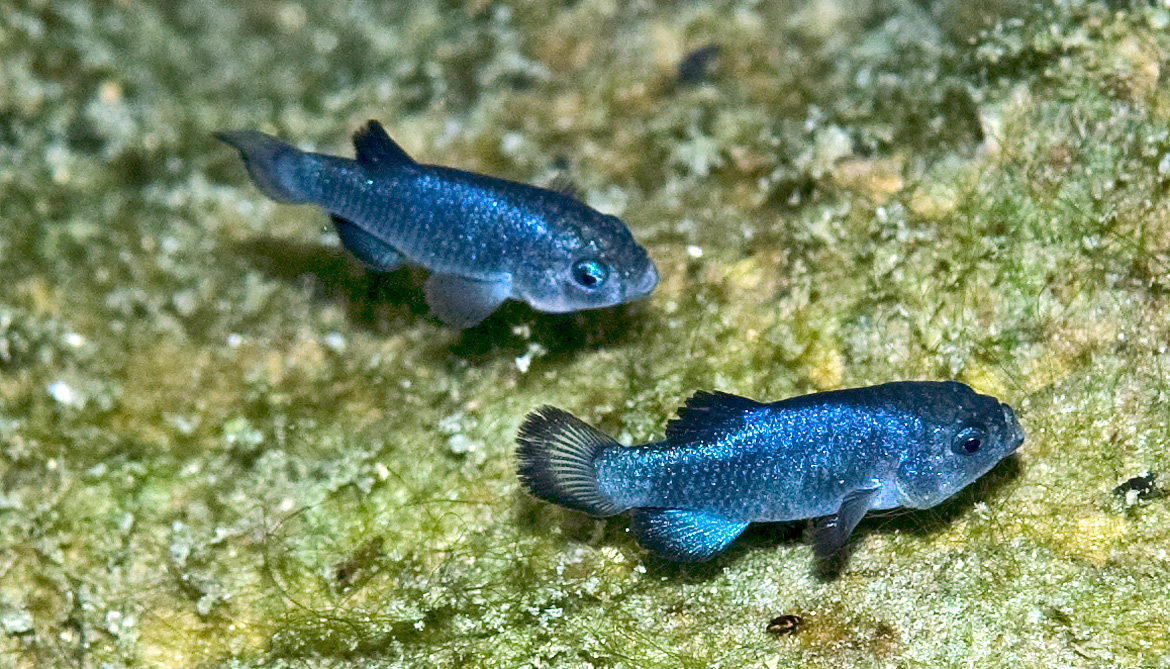 A new risk assessment gives scientists guidance on how to rescue an extremely endangered fish by establishing a captive breeding program.

Scientists estimate that fewer than 100 of the critically endangered Devils Hole pupfish remain in their Mojave Desert home.

Considered the world’s rarest fish, with one of the smallest geographic ranges of any wild vertebrate, the tiny pupfish (Cyprinodon diabolis)—about one-inch long as an adult—neared extinction in spring 2013 when populations dropped to an all-time low of 35 observable pupfish.

The dire situation spurred the US Fish and Wildlife Service to open the Ash Meadows Fish Conservation Facility, which is less than a mile from Devils Hole.

Previous attempts to establish refuge populations of pupfish have not fared well, either because the transplanted fish did not survive or because they crossbred with other species of pupfish.

Biologists from the agencies managing the pupfish captive breeding program wanted a risk assessment to determine which methods have the highest chance of success.

Steven Beissinger, professor of environmental science, policy, and management at University of California, Berkeley finds that when it came to reducing impact on the wild population, it was better to transfer pupfish eggs to a captive breeding facility rather than adults.

His risk assessment also shows that it would be preferable to transfer fish in the fall, when the population tends to be larger, rather than in the spring.

In addition, Beissinger finds that moving more than six adults per year for three consecutive years rapidly increases the risk of extinction. The results, published in the journal PeerJ, show that the wild pupfish faces a 28 to 32 percent risk of extinction over the next 20 years.

“The study really puts out more empirically the risk of extinction for this fish,” says Kevin Wilson, an aquatic ecologist at Death Valley National Park who is working on the recovery of the pupfish. “These findings are providing us with very good tools for our toolbox.”

The pupfish is found only in a limestone cavern in the Devils Hole geothermal pool, about 60 miles east of Death Valley National Park. Geologists estimate that the cavern, which is at least 426 feet deep, was formed more than 500,000 years ago.

The pupfish are believed to somehow have gained access to the site less than 50,000 years ago when a roof of the cavern collapsed, possibly due to an earthquake, exposing the cavern and its water to the ground surface. The oxygen-poor water in Devils Hole stays a toasty 92-93 degrees Fahrenheit, around the upper limits of temperature tolerated by most fish.

A study published last month found that climate change is contributing to the warming of the water in Devils Hole, negatively affecting the ability of eggs to hatch and larvae to survive. Pupfish populations also may have declined due to reductions in food supply and genetic diversity.

“Some species are critical to conserve because they serve important functions in their ecosystems, and others are important because they might be sources of new medicines, or they may have unique biological features that could inspire human innovation,” says Beissinger.

“We don’t know if the Devils Hole pupfish has or ever will serve any of these important functions, which seems unlikely as long as the species remains restricted to its single cavernous refuge. We do know that the pupfish, like all species, has a fundamental right to exist that is independent of its value to humans.”

The pumping of groundwater by agricultural interests and land developers in the region lowered the water levels needed by the pupfish to feed and breed. A landmark 1976 US Supreme Court environmental rights ruling favored the fish and other species in Devils Hole by requiring the maintenance of a minimum level of water, thereby curtailing groundwater pumping.

“The effort to save the pupfish resulted in the protection of aquatic ecosystems from the excessive pumping of groundwater throughout the Desert Southwest and inspired generations of conservationists,” saus Beissinger.

Beissinger also calculates that if the wild Devils Hole pupfish numbers become small enough, it may be necessary to remove the entire population into a captive breeding program, an extreme measure he called a “California condor moment” because such a controversial action was used to rescue the condor from extinction in 1986.

He notes that, unlike the slow-reproducing condor that does not breed until five or six years of age, the Devils Hole pupfish has the potential for faster population growth because it matures quickly and can reproduce multiple times in its first year of life.

“Somehow, this handsome little fish has heroically persisted in the harsh desert environment through thousands of years of drastic climate warming and droughts,” says Beissinger. “Should the human condition ever arrive at this point after another century of increasing carbon dioxide emissions and climate warming, we may need someone to help us out of our hole.”