Clams' iridocytes give them their spectacular color and channel sunlight to symbiotic algae. (Credit: Penn) 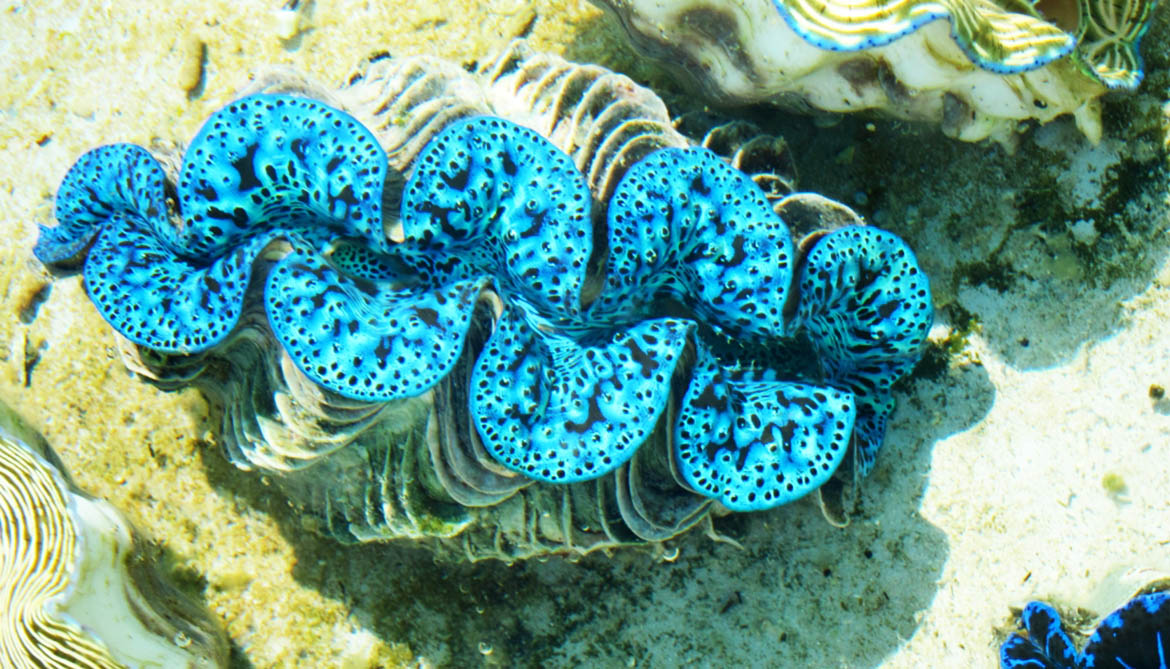 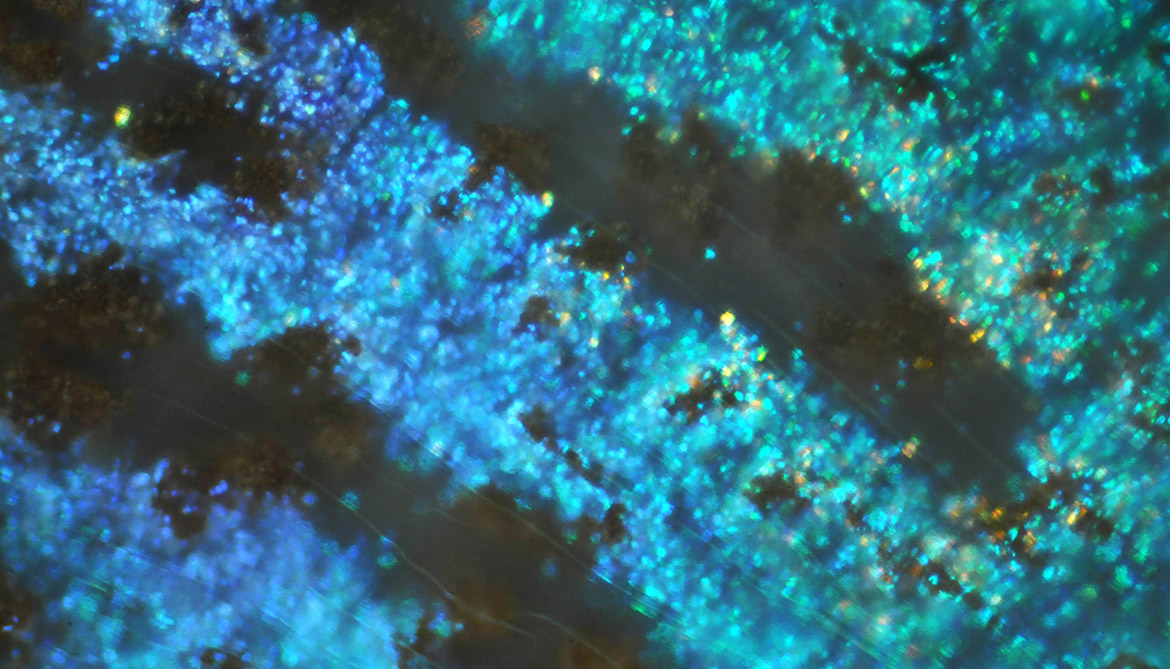 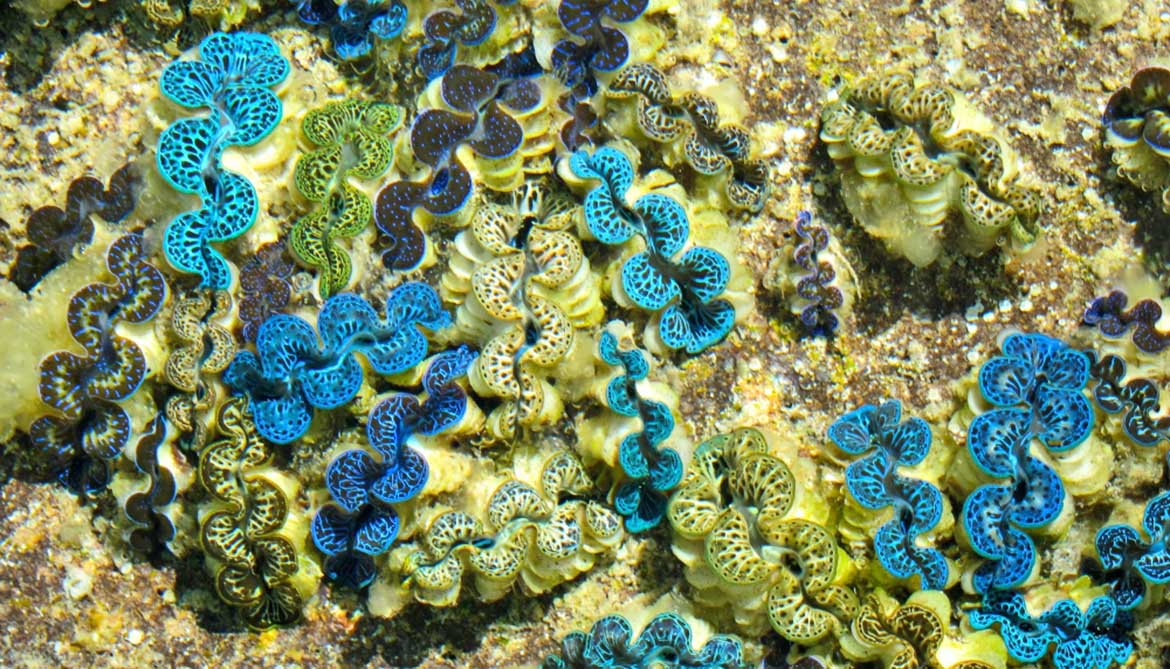 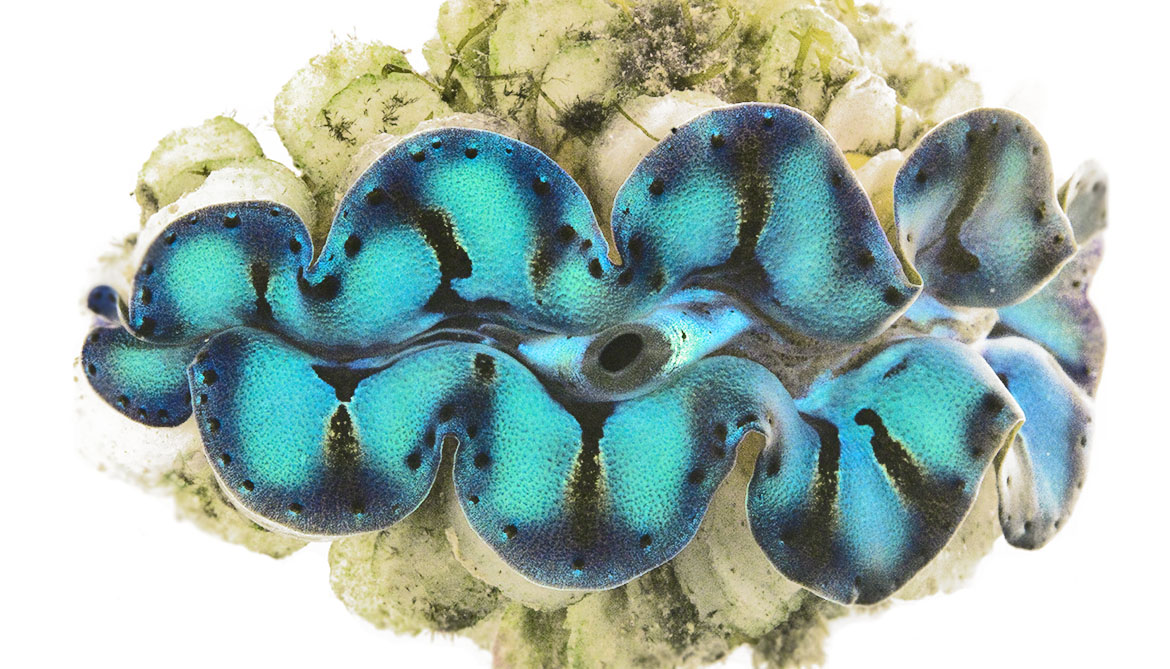 The structures, known as iridocytes, filter sunlight. That sunlight feeds the symbiotic algae that grow inside clams.

“Many mollusks, like squid, octopuses, snails, and cuttlefish have iridescent structures, but almost all use them for camouflage or for signaling to mates. We knew giant clams weren’t doing either of those things, so we wanted to know what they were using them for,” says Alison Sweeney, an assistant professor in the physics and astronomy department at the University of Pennsylvania.

These algae convert the abundant sunlight of the clams’ equatorial home into a source of nutrition but are not particularly efficient in the intense sunlight found on tropical reefs; sunlight at the latitude where these clams live is so intense that it can disrupt the algae’s photosynthesis, paradoxically reducing their ability to generate energy.

The team members began their study hypothesizing that the clams’ iridocytes were being used to maximize the usefulness of the light that reaches the algae within their bodies. They were first confounded by the relationship between these iridescent structures and the single-celled plants, until they realized that they had an incomplete picture of their geometry.

When they made more precise cross sections of the clams, they found that the algae were organized into pillars, with a layer of iridocytes at the top.

“When we saw the complete picture, we understood that the pillars are oriented exactly the wrong way if you want to catch sunlight,” Sweeney says. “That’s where the iridocytes come into play.”

The team relied on Penn’s Amanda Holt, a postdoctoral researcher formerly at the University of California, Santa Barbara, as well as Sanaz Vahidinia, of NASA’s Ames Research Center, to model exactly what was happening to the light once it passed through the iridocytes; the degree of disorder within these cells bore a resemblance to structures Vahidinia studies at NASA: the dust of Saturn’s rings.

Their analysis suggested that the iridocytes would scatter many wavelengths of light in a cone-like distribution pointing deeper into the clam.

Red and blue wavelengths, the most useful to the algae, spread the widest, impacting the sides of the pillars in which the single-celled plants were stacked.

To test this model, the team constructed fiber optic probes with spherical tips the size of an individual alga. Threaded through a section of clam flesh alongside the native algae, this spherical probe was able to detect the angled light scattered by the iridocytes, whereas a flat-tipped probe, only able to sense light shining straight down, detected nothing.

“We see that, at any vertical position within the clam tissue, the light comes in at just about the highest rate at which these algae can make use of photons most efficiently,” Sweeney says. “The entire system is scaled so the algae absorb light exactly at the rate where they are happiest.”

“This provides a gentle, uniform illumination to the vertical pillars consisting of the millions of symbiotic algae that provide nutrients to their animal host by photosynthesis,” adds Morse. “The combined effect of the deeper penetration of sunlight—reaching more algae that grow densely in the 3-dimensional volume of tissue—and the “step-down” reduction in light intensity—preventing the inhibition of photosynthesis from excessive irradiation—enables the host to support a much larger population of active algae producing food than possible without the reflective cells.”

Mimicking the micron-scale structures within the clam’s iridocytes and algal pillars could lead to new approaches for boosting the efficiency of photovoltaic cells without having to precisely engineer structures on the nanoscale.

Other alternative energy strategies might adopt lessons from the clams in a more direct way: current bioreactors are inefficient because they must constantly stir the algae to keep them exposed to light as they grow and take up more and more space.

Adopting the geometry of the iridocytes and algal pillars within the clams would be a way of circumventing that issue.

“The clam has to make every square inch count when it comes to efficiency,” Sweeney says. “Likewise, all of our alternatives are very expensive when it comes to surface area, so it makes sense to try to solve that problem the way evolution has.”

The Army Research Office and the Office of Naval Research supported the research. Yakir Luc Gagnon of Duke University collaborated on the study, which was published in the Journal of the Royal Society Interface.

Solar cells on your roof can save a lot of water

Peel-off trick might pave the way for solar cell windows