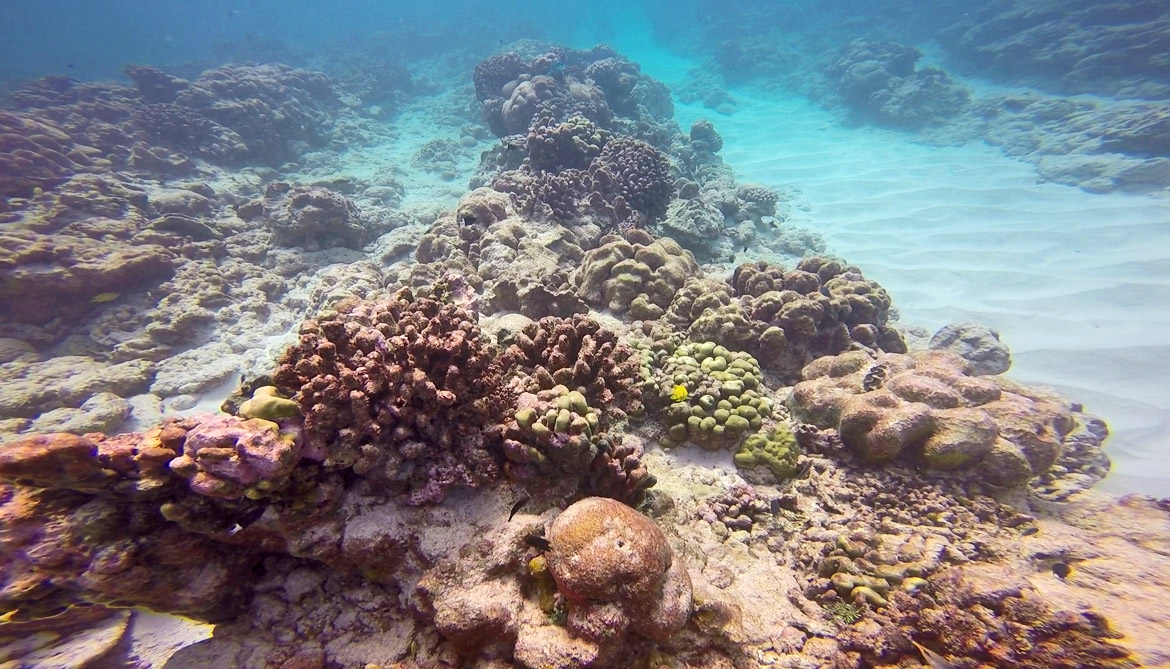 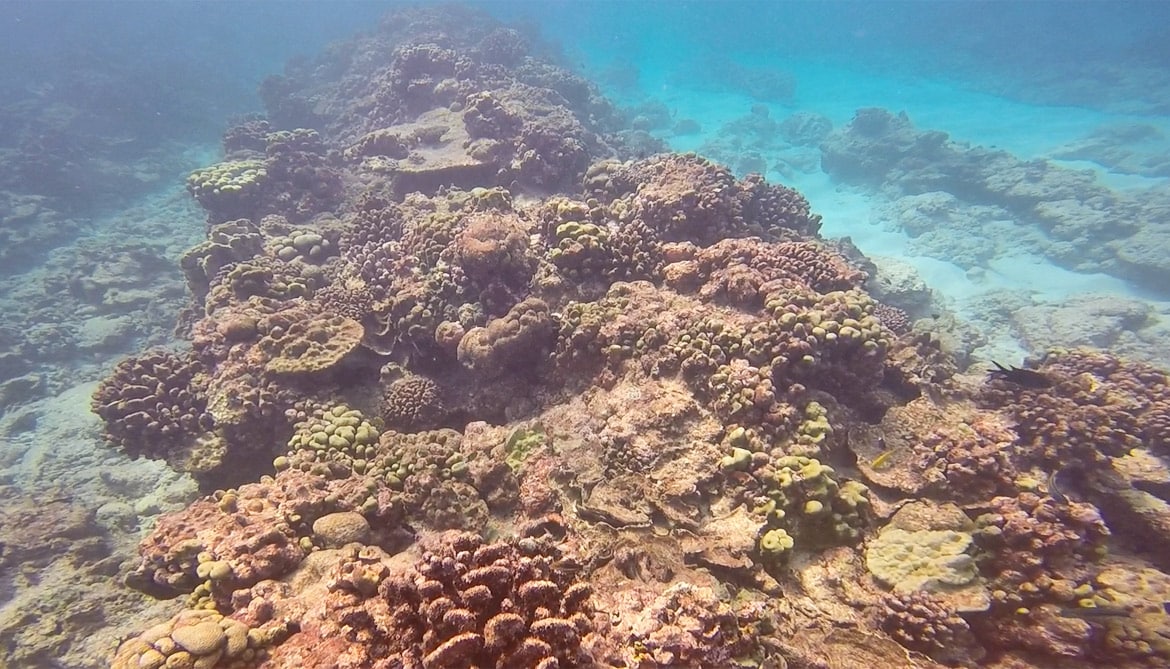 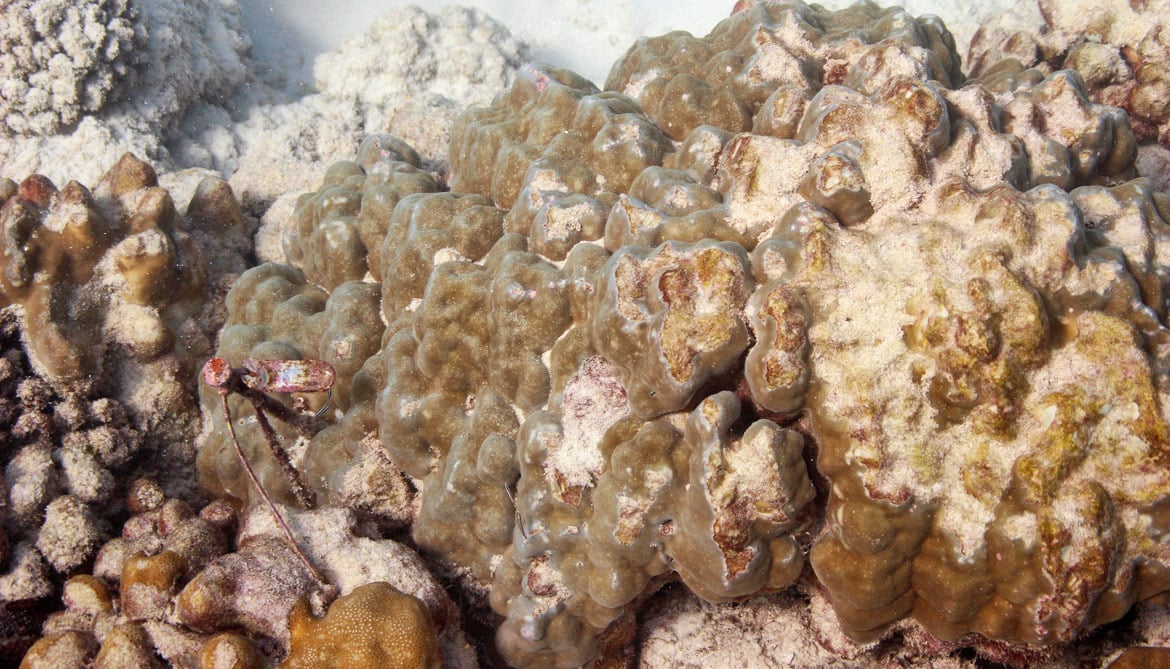 A team of marine scientists has returned from nearly a month of scuba diving on coral reefs in the middle of the equatorial Pacific Ocean. What they saw will haunt them for a long time.

“It’s as if someone has thrown a fuzzy red/brown blanket over the reef, turning it all one color,” says Kim Cobb, a professor in Georgia Tech’s School of Earth and Atmospheric Sciences. “Right now it looks okay from afar, with all the coral structure still in place. But when you get up close, you see that it’s all dead, as far as the eye can see. It’s very eerie.”

“Christmas Island’s coral reefs are like ghost towns now. The structures are all still there, but no one is home.”

Cobb and colleagues worked with biologist Julia Baum and her team of University of Victoria researchers on Kiritimati Island (also known as Christmas Island), the world’s largest coral atoll. Christmas Island is about 150 miles north of the equator and 1,340 miles south of Hawaii. The current El Niño is the strongest ever recorded, and it has hit this area harder than anywhere else on the planet.

When the Georgia Tech team visited the reefs last November, 50 to 90 percent of corals they saw were bleached and as many as 30 percent were already dead. This time, after months of warm waters powered by the El Niño, the numbers were starker. After extensive underwater surveys around the atoll, Baum’s team estimates that 80 percent of the corals are dead and 15 percent are bleached. Only 5 percent are still alive and healthy.

“To see the reefs change this dramatically in just a few months is shocking,” says Baum. “We were bracing ourselves for the worst, but seeing it with our own eyes was surreal. Christmas Island’s coral reefs are like ghost towns now. The structures are all still there, but no one is home.”

Corals are communities of animals that have tiny photosynthetic algae living inside them in a mutually beneficial relationship. The algae provide corals with their vibrant corals, along with a vital source of food via photosynthesis. Corals, in turn, provide the structure that shelters their tiny algal symbionts.

Corals are very temperature-sensitive. A rise of just 1-1.5 degrees Celsius can stress coral enough to evict the algae until the heat stress subsides. This leaves a ghostly white coral skeleton and is known as “bleaching.” During protracted warm water events, such as the current El Niño, bleached corals aren’t able to bring their symbiotic plants back in, and they can die of starvation.

Temperatures on Christmas Island have been between 1.5 to 3 degrees Celsius higher than normal for the past 10 months straight. “This intense heat stress has transformed some of the world’s healthiest coral reefs into graveyards,” says Baum. “To our knowledge, this is the greatest coral mass mortality event at a single location on record.”

Many other areas in the world’s oceans are also showing extensive bleaching this year, including Australia’s Great Barrier Reef, but the Christmas Island corals were pushed far beyond bleaching.

Cobb and Baum think it may take a decade or more for the Christmas Island reefs to recover, but they might never look the same because of warmer-than-average temperatures and lower ocean acidity. Both are the consequences of rising greenhouse gases.

“Aside from their sheer beauty and appeal, coral reefs provide a host of ecosystem services that are critical to a healthy ocean,” says Cobb. “When remote reefs like Christmas Island succumb to acute temperature stress, it’s a wake-up call for the rest of the world’s reefs, which will come under increasing stress from climate change.”

“Christmas Island’s people rely on the reefs for their food and their livelihoods, so they’ll be profoundly affected by this event,” says Baum. She and her team will be studying the reefs carefully over the coming years to assess the recovery and learn more about how some corals are managing to resist heat damage. At the same time, Cobb and her students will work to determine whether the record-breaking 2015/2016 El Niño event is a portent of future El Niño events under continued climate change.

“Our research will provide important new insights into how corals may be able to survive more frequent temperature extremes over the next century,” says Baum. “In the meantime, this event is a vivid reminder that the effects of climate change are happening now, and that the choices we make about greenhouse gas emissions in the next decades will have long-term effects.”