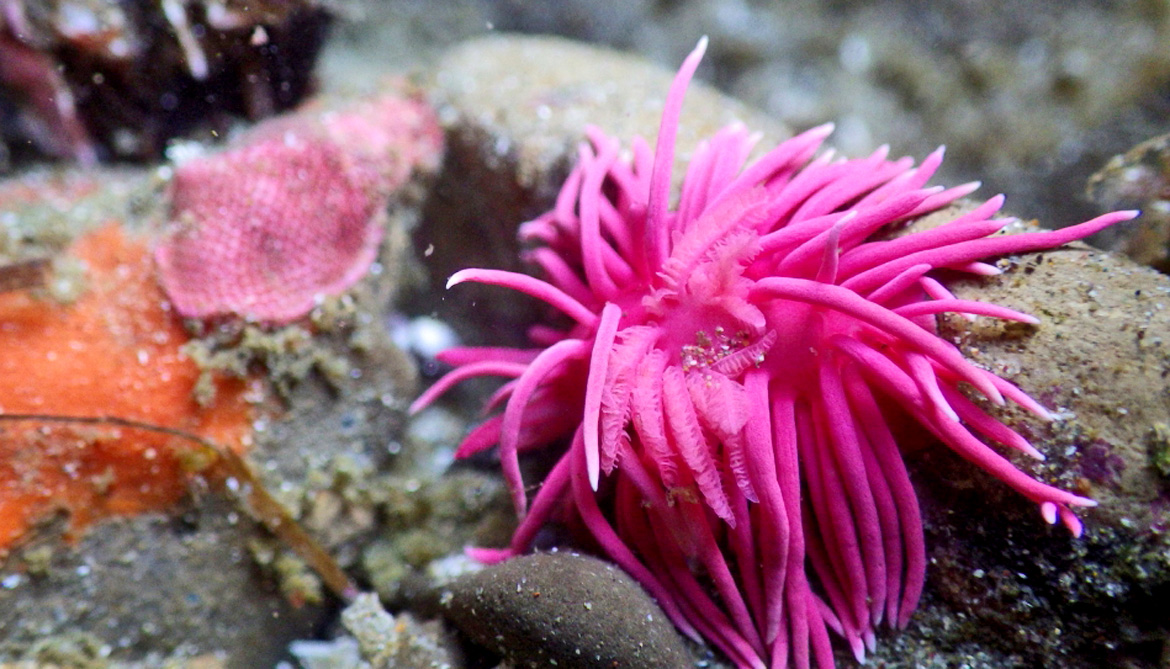 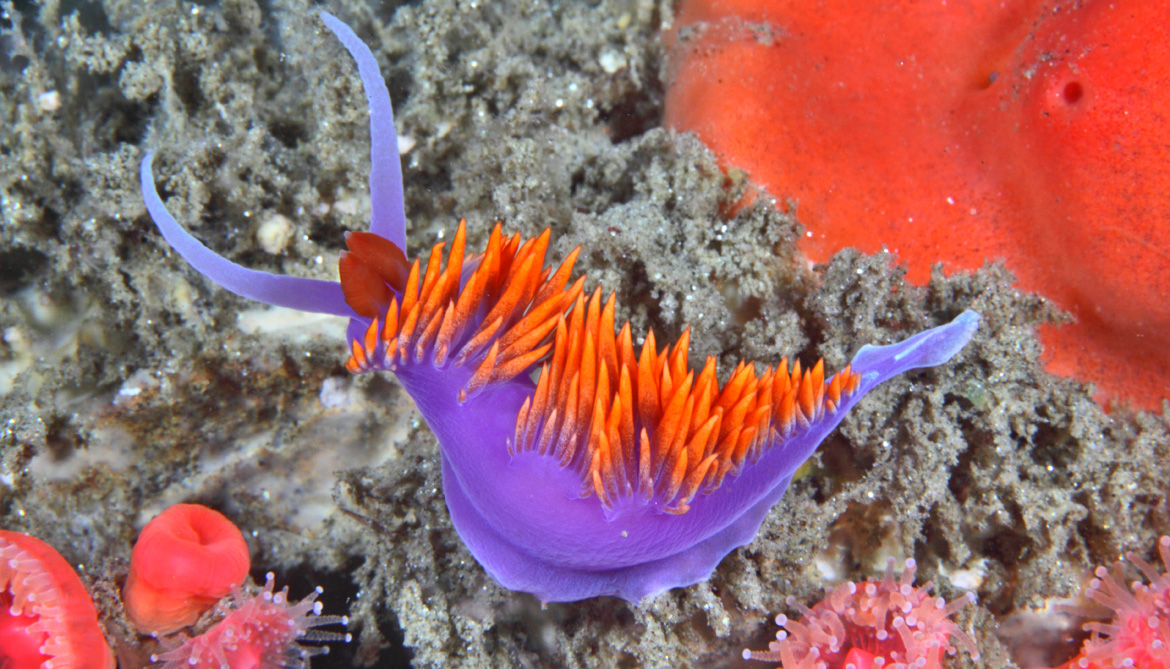 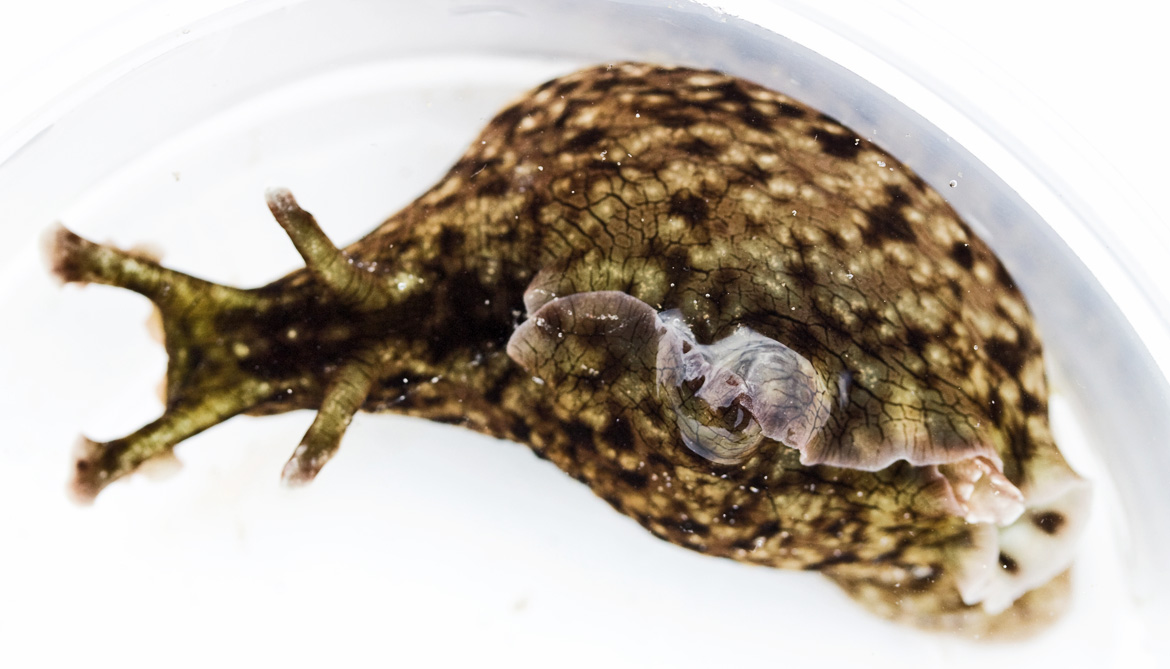 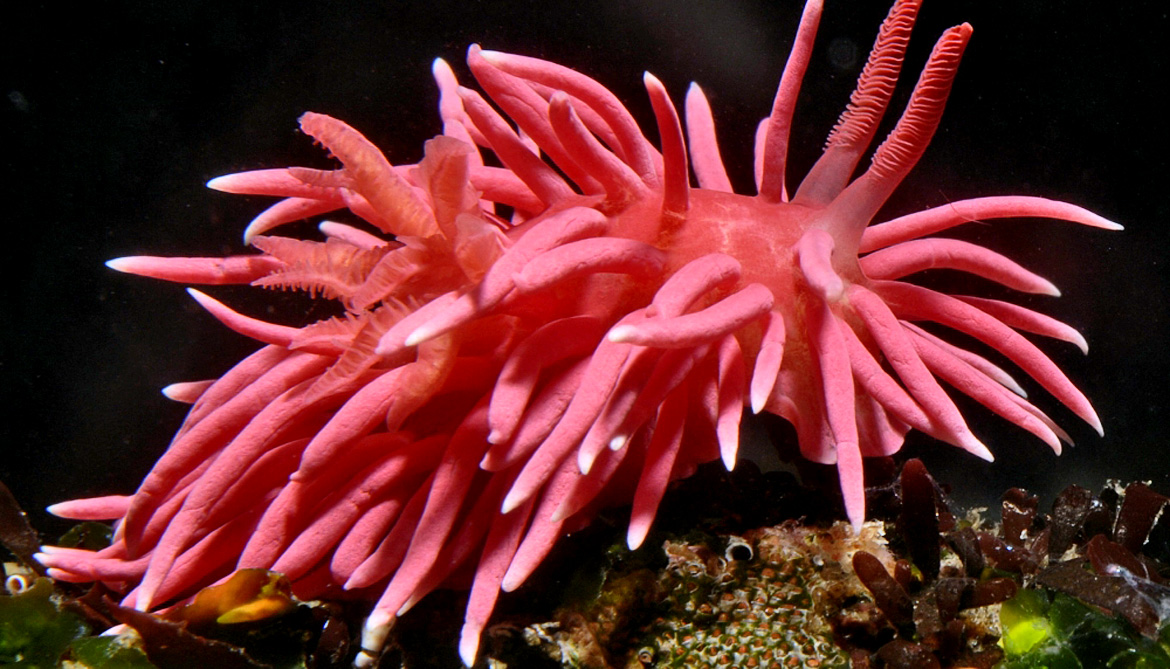 The Hopkins’ Rose nudibranch (Okenia rosacea) is common to Southern California but found only sporadically in Central California and rarely north of San Francisco.

However, in the past few weeks, researchers have reported densities of up to dozens per square meter in tide pools from San Luis Obispo to Humboldt counties.

These are the highest numbers and northernmost records of this species seen since the strong El Niños of 1998 and 1983.

Only this year, there’s been no El Niño to speak of.

Zoologist Jeff Goddard, a project scientist at University of California, Santa Barbara’s Marine Science Institute and research associate at the California Academy of Sciences, equates the current population bloom of Hopkins’ Rose to the one he observed on the Central Coast starting in early 1977.

“Last week, during routine monitoring near Morro Bay, I was astonished by the numbers of Okenia present,” Goddard says. “I remembered 1977 and decided to sample my old study sites on either side of Monterey Bay. Both also had exceptionally abundant Okenia, plus other southern nudibranchs not typically present, including at one site the stunning purple and orange Spanish Shawl.

“We’ve also had a reliable report of California Sea Hares on the outer Sonoma coast, far north of the usual range of this large herbivorous sea slug.”

The 1977 bloom occurred also during a weak El Niño and coincided with a major climate shift in the eastern Pacific Ocean. This triggered range deviations in numerous coastal species, including gastropods, barnacles, fishes, and dolphins.

During those warm decades, fluctuations in the abundance of intertidal adults of Hopkins’ Rose and other nudibranchs in Central California were driven by regional oceanographic influences on currents and larval recruitment. This is what Goddard—along with lead author Stewart Schultz and colleagues John Pearse and Terry Gosliner among others—argued in a 2011 paper in Limnology and Oceanography.

They predicted high recruitment of these nudibranchs when warm temperatures, northward-directed currents and weak upwelling occur—and that is exactly what is happening now.

When the larvae have fed and grown large enough—typically over a period of a month or two—they settle to the bottom. They metamorphose into juvenile slugs when they encounter the prey of the adults.

For Hopkins’ Rose, this prey comes in the form of a rose-colored encrusting bryozoan—a type of colonial invertebrate commonly known as a moss animal. The Hopkins’ Rose nudibranch not only feeds exclusively on this pink bryozoan during its entire bottom-feeding life but also derives its own colorful pigmentation from it.

This perennial bryozoan is locally abundant on the Pacific Coast as far north as British Columbia. However, cold temperatures and ocean circulation patterns normally keep it out of reach of the Hopkins’ Rose nudibranch north of San Francisco.

Because Hopkins’ Rose nudibranchs are fast-growing, live for a year or less and move little as adults, they are potentially useful in tracking relatively rapid changes in ocean conditions, according to Goddard. He and other researchers wonder whether they are currently signaling another major climate shift from cold to warm.

Although the index values of the Pacific Decadal Oscillation—a long-lived El Niño-like pattern of Pacific climate variability—have recently jumped to the highest levels observed since 1997, scientists say it is still too early to be certain that a major climate shift is in progress, at least until they become better at decoding the physical and biological signals.

If a decadal shift is in progress, Goddard notes that there is a good chance the next El Niño will be major—on par with the 1983 and 1998 events—and bring with it myriad surprises from the south.

Researchers from UC Santa Barbara, UC Santa Cruz, the Bodega Marine Laboratory, and the California Academy of Sciences have been monitoring the Hopkins’ rose population boom.