STONY BROOK (US) — Sauropods replaced their teeth faster than any other type of dinosaur, which may have let them eat enough foliage to sustain their massive size.

Published in PLOS ONE, the study also hypothesizes that differences in tooth replacement rates among the giant herbivores likely meant their diets varied, an important factor that allowed multiple species to share the same ecosystems for several million years. 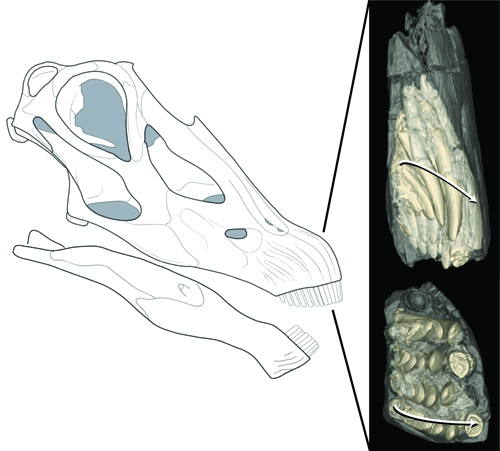 This is an illustration of a skull of Diploducus alongside the research team’s CT scan-generated images of some teeth in the front of its jaws. Bone is transparent and teeth are yellow. The arrows show the direction of tooth replacement, which is back to front similar to a shark. (Credit: Stony Brook U.) 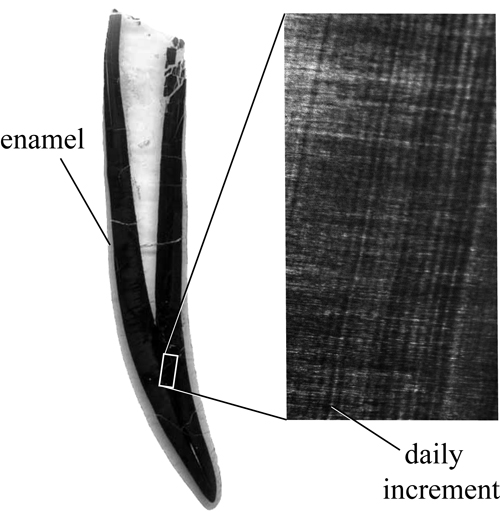 An image of a cross-section of a Diploducus tooth, which is about half the width of a dime. The blow-up is of dentine, the material that holds incremental lines. About five or six of these lines equal the width of a human hair. (Credit: Stony Brook U.)

Paleontologists have long wondered how sauropods digested massive amounts of foliage that would have been necessary for their immense sizes. The rapid tooth replacement, more like that of sharks and crocodiles than other types of dinosaurs, kept teeth fresh given the immense amount of wear they underwent from clipping off enormous volumes of food required for them.

“The microscopic structure of teeth and bones records aspects of an animal’s physiology, giving us a window into the biology of long-extinct animals,” says paleontologist Michael D’Emic, research instructor in the department of anatomical sciences at Stony Brook University School of Medicine.

“We determined that for the gigantic sauropods, each tooth took just a few months to form. Effectively, sauropods took a ‘quantity over quality’ approach.”

D’Emic explains that, unlike mammals and some other dinosaurs, sauropods did not chew their food. They snipped food into smaller pieces before swallowing.

“At least twice during their evolution, sauropods evolved small, peg-like teeth that formed and replaced quickly,” says D’Emic. “This characteristic may have led to the evolutionary success of sauropods.”

The technology and method enabled the researchers to count the number of growth lines in each tooth. Growth lines are a fraction of the thickness of a human hair. A tally of the lines gives the formation of each tooth in days.

To find out how fast these teeth were replaced, D’Emic and colleagues subtracted the ages of successive teeth from one another. The results indicated that replacement in these animals was extremely fast.

“A nearly 100-foot-long sauropod would have had a fresh tooth in each position about every one to two months, sometimes less” says D’Emic.

The tooth replacement rate, size, and shape data collected by the team indicates that despite their somewhat stereotyped body plan and large body size, sauropods exhibited varied approaches to feeding. The paper indicates that this variation “represents a potential factor that allowed multiple giant species such as Camarasurus and Diplodocus to partition the same ecosystem.”

D’Emic adds that the research also contributes to a new view of sauropods, which were once thought to be more primitive than other dinosaur groups such as horned and duckbilled dinosaurs.

Sauropod dinosaurs, the largest animals to ever walk on land, had tiny heads for their bodies. Even a 100-foot-long animal would have a head only slightly larger than that of a horse. Sauropods also had tiny teeth, ranging from the diameter of a pencil to a wide marker and only a few inches long.

The paper co-authors include John Whitlock of Mount Aloysius College, Kathlyn Smith of Georgia Southern University, and Jeffrey Wilson and Daniel Fisher of the University of Michigan.

The dinosaur specimens used for the research were loaned to the paleontologists from the Yale Peabody Museum, Utah Museum of Natural History, Staatliches Museum für Naturkunde, and the Iziko South African Museum.