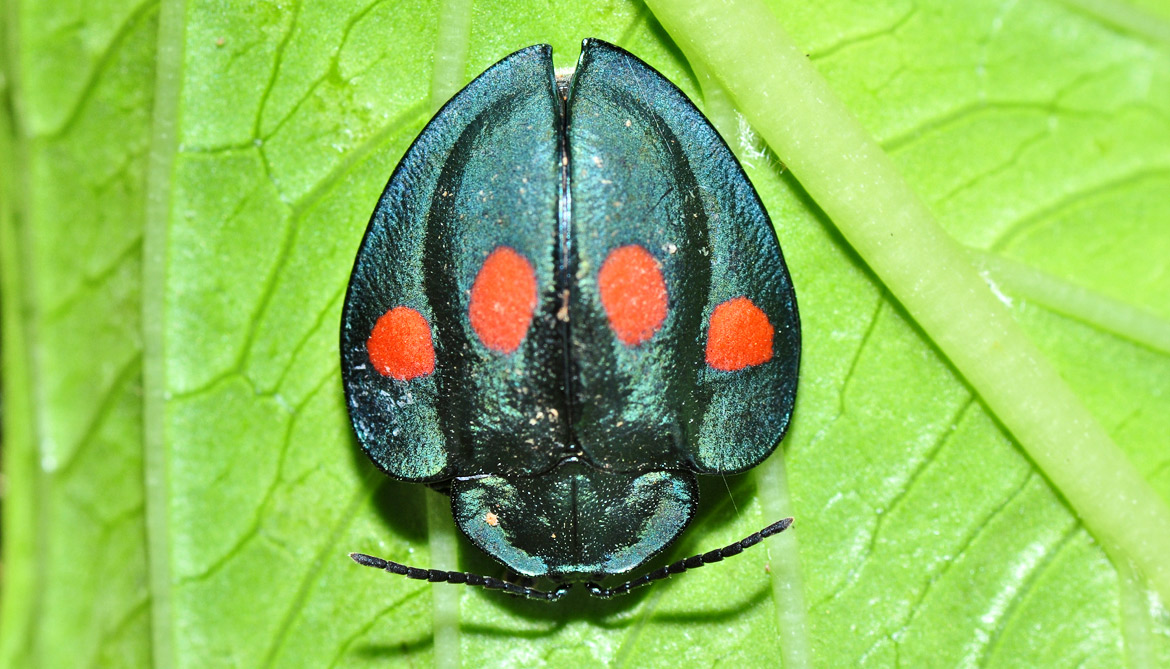 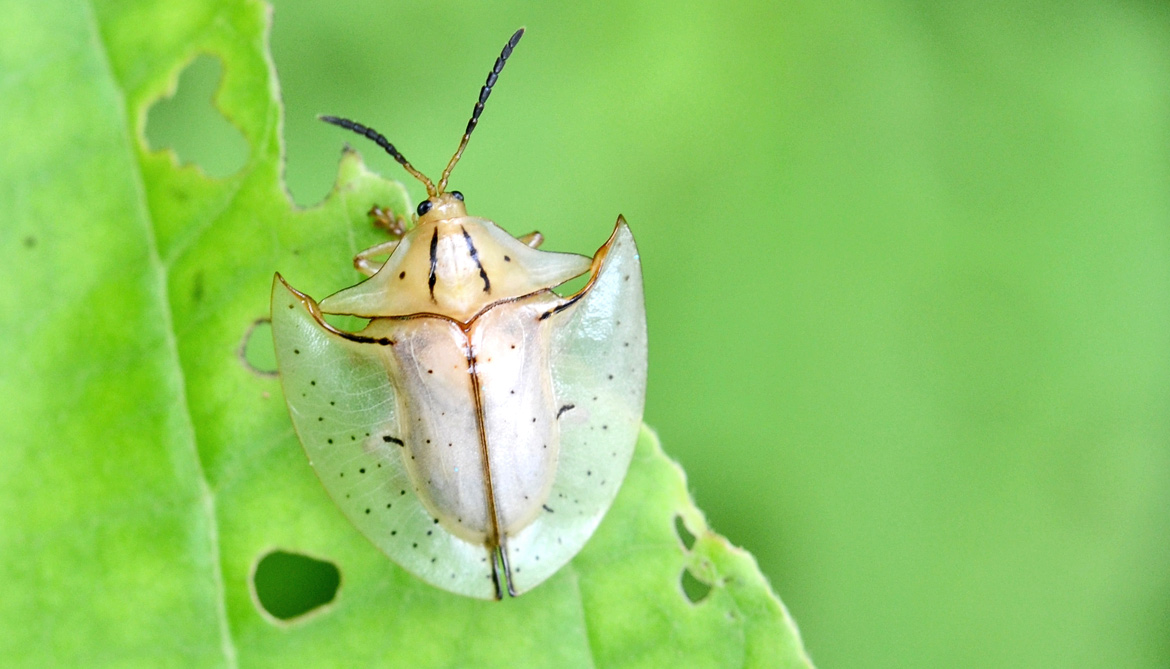 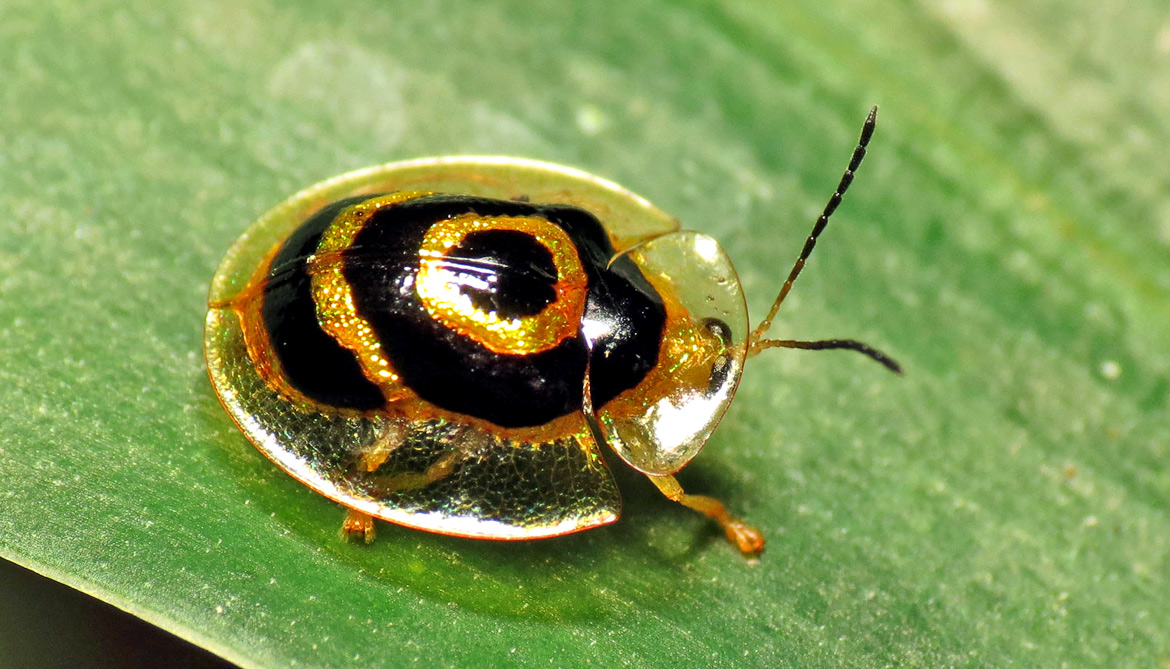 Many scientists believe the very same dynamics that have shaped conflict between nations since the early 20th century also may govern how species evolve on Earth.

Scientists are taking the arms-race model into the field to discover how it plays out among tortoise beetles.

“The term ‘arms race’ originated with tense and competitive relationships that developed among European nations before World War I as they built up stockpiles of conventional weapons,” says Caroline Chaboo, assistant professor of ecology and evolutionary biology at the University of Kansas and assistant curator with the university’s Natural History Museum and Biodiversity Institute.

“The term has become widely used to describe competitive relationships.” She says biologists have adopted the term for another kind of escalation—defenses, countertactics, and one-upmanship among rivals in the natural world.

“We know these evolutionary interactions can be fast, as in medicine where medical professionals and drug companies have a tense relationship with fast-evolving and drug-resistant pathogens, and they must design new and different cocktails to keep up with this enemy,” Chaboo says.

“Other examples of tense relationships that drive evolution, counterevolutionary responses, and one-upmanship include parasites and their hosts, seeds, and seed-eating bugs, hunters, and prey.”

According to Chaboo, such arms races influence the mechanics of evolution, as traits developed for defense over time result in entirely new species. “One member of the relationship is attacking or resisting while the other is evolving to overcome defenses or avoid attack,” she says.

“The competition can be at the level of genes, sexes, or individuals. Ultimately, the one-upmanship drives diversity in a certain direction. Enemies make the population better. Thus, the more fit individuals—those with better escape responses, more effective offenses, better weapons to fight—avoid elimination and live on to reproduce and contribute their genes to subsequent populations.”

While the arms-race model is popular in evolutionary studies, it needs more validation from field research, Chaboo says. Now, she and colleagues will study questions from the arms-race model of defenses in leaf beetles. The fieldwork will take place at the Smithsonian Tropical Research Institute in Panama next summer.

With funding from the National Science Foundation, Chaboo and her team will focus in part on the evolving defenses and tactics of tortoise beetles. The fieldwork will take place at the Smithsonian Tropical Research Institute in Panama next summer.

“In the larval stage, tortoise beetles exhibit a very different array of physical, behavioral, and chemical traits,” she says. “Baby insects lack wings, and their first reaction to interference is to walk away. A large group of tortoise beetles has lateral projections which function in different ways—these break up the body outline, making the larva ‘disappear’ against its background, and they are armed with pointed hairs that may act as lances.”

[Beetles use ‘right time’ cologne as a come-on]

Chaboo says many tortoise beetle species also show gregarious behaviors, living in groups. Working together, they diffuse plant toxic chemicals as each member ingests a small amount, and they also present a more intimidating herd to an “interloper.”

Also, the beetles expertly defend themselves with the ick factor. “By far, the most peculiar defense is the recycling of their own feces and cast skins—exoskeletons of earlier larval stages—into a shield that is worn like an umbrella over the body,” she says. “This shield can ‘hide’ the larva, making it look like a damaged leaf to an aerial enemy, or form a nasty physical barrier to probing enemy mouthparts.”

From beetles to people

One arms-race strategy researchers will study in depth is the “escape and radiation” tactic, found in tortoise beetles, whereby new traits that better deter attack arise in a species. That species flourishes, free of enemy attack—to radiate or split into two or more species, giving rise to richer biodiversity.

A better understanding of arms-race theory derived from studying the beetles could help us better grasp our own evolution, Chaboo says. “The work on beetles might demonstrate fundamental principles about how antagonistic and competitive relationships drive evolution and generate diversity,” she says. “This can explain partly how our world looks and even explain human evolution. What aspects of human morphology and behavior can be traced back to the impact of our ancestors trying to avoid being prey or becoming more adept hunters?”