CORNELL (US)—Conventional thinking says that animal immune systems have evolved to defend against harmful microorganisms, but what role do friendly bacteria play in shaping animal immunity?

All animals are colonized by bacteria—in fact, humans have 10 times as many bacteria as cells—and different animals are associated with different kinds of beneficial microorganisms.

Yet, there are virtually no data on how the immune systems in different animals have evolved to support these different sets of microorganisms.

A new study indicates that aphids have evolved without a key immune system pathway found in all other insects, due to its 100 million-year-old symbiosis with a friendly bacterium, Buchnera aphidicola.

The pathway, called the immune deficiency (IMD) signaling pathway, defends against Gram-negative bacteria, which include Buchnera, E. coli, Salmonella and many others.

Details appear in the Aug. 18 issue of the Proceedings of the Royal Society B.


“Perhaps the reason why (aphids lack the IMD pathway) is that this pathway would target these symbiotic bacteria,” suggests Angela Douglas, professor of insect physiology and toxicology at Cornell University and the paper’s lead author.

Scientists have believed that Buchnera bacteria live peacefully within aphids, because they have evolved to be non-immunogenic, meaning they have lost the ability to trigger an immune response in any host.

Scientists have also thought that the insect immune system is fixed and uniform. But when special fruit fly cells were exposed to Buchnera bacteria, their immune system was activated, especially the IMD pathway, and the bacteria died within days.

The findings prove that the bacteria do trigger an immune response in other organisms. It also showed that the aphid immune system had indeed adapted to coexist with Buchnera. 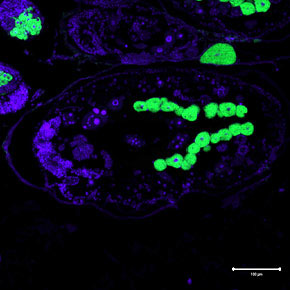 “This is an illustration of how beneficial bacteria can play a large role in the diversification of animal immune systems,” says Douglas.

The findings are important because they may point to new aphid management strategies where researchers target the bacteria, or the aphids directly, with natural or biocontrol agents that interfere with the aphids’ unique immune system but do not harm other insects.

Future research will address how the aphid immune system works and how it is different from other insects.

The aphid-Buchnera symbiosis represents an extreme example of how friendly bacteria have altered an organism’s immune system, Douglas says.

“It’s a system by which you can understand general principles that you can then apply to other systems that are not as distinctive.”

The Buchnera bacteria supply the aphid with essential amino acids; these nutrients are in short supply in the aphid diet of plant sap. When aphids are experimentally deprived of these bacteria, they do not grow or reproduce.

Researchers from the University of Cambridge contributed to the study, which was  funded by the United Kingdom’s Biotechnology and Biological Sciences Research Council, FlyChip, and Cornell’s Sarkaria Institute of Insect Physiology and Toxicology.

This signal indicates when plants are under stress