Hear Doug Wiens describe what it's like to do research in Antarctica. Listen here. (Credit: Washington University in St. Louis) 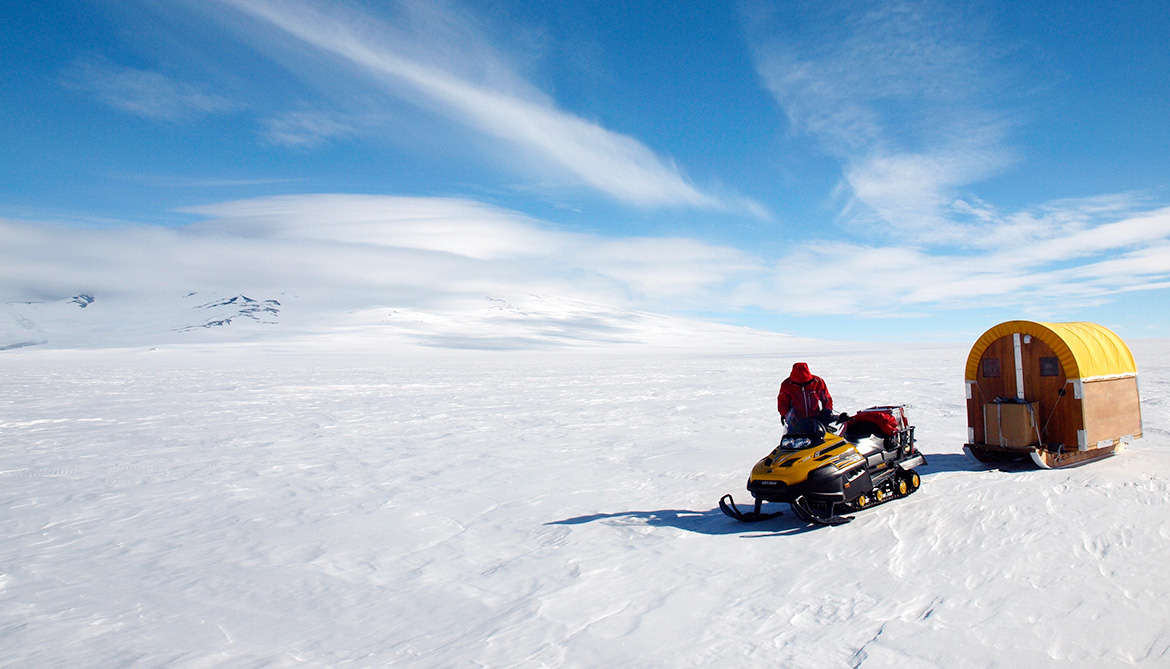 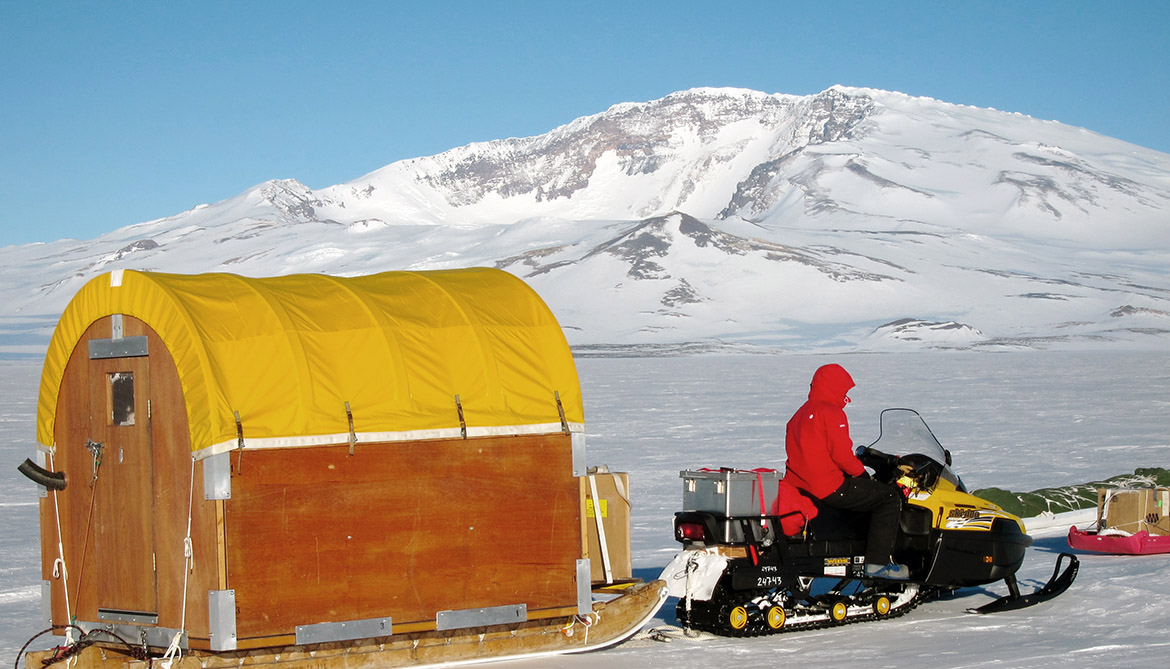 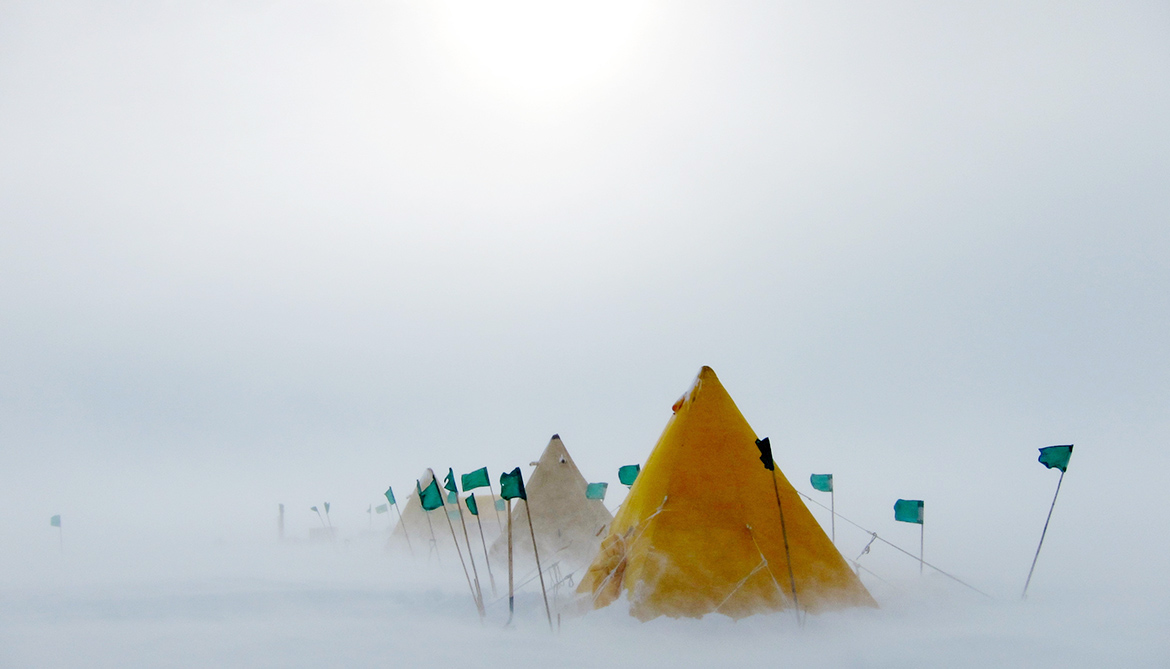 Data recovered from seismometers in Antarctica are giving scientists the first detailed look at the Earth beneath the region.

“Our understanding of what’s going on is really hampered because we can’t see the geology,” says Andrew Lloyd, a graduate student at Washington University in St. Louis. “We have to turn to geophysical methods, such as seismology, to learn more.”

Lloyd helped deploy research seismometers across the West Antarctic Rift System and Marie Byrd Land in the austral summer of 2009-10. He then returned in late 2011 and snowmobiled more than 1,000 miles, living in a Scott tent, to recover the precious data.

This is the first time seismologists have been able to deploy instruments rugged enough to survive a winter in this part of the frozen continent.

The team used the instrument’s recordings of reverberations of distant earthquakes from January 2010 to January 2012 to create maps of seismic velocities beneath the rift valley. An analysis of the maps was published in the Journal of Geophysical Research: Solid Earth.

Not surprisingly, the maps show a giant blob of superheated rock about 60 miles beneath Mount Sidley, the last of a chain of volcanic mountains in Marie Byrd Land at one end of the transect.

More surprisingly, they reveal hot rock beneath the Bentley Subglacial Trench, a deep basin at the other end of the transect.

The Bentley Subglacial Trench is part of the West Antarctic Rift System and hot rock beneath the region indicates that this part of the rift system was active quite recently.

Mount Sidley, the highest volcano in Antarctica, sits directly above a hot region in the mantle, Lloyd says. Mount Sidley is the southernmost mountain in a volcanic mountain range in Marie Byrd Land, a mountainous region dotted with volcanoes near the coast of West Antarctica.

“A line of volcanoes hints there might be a hidden mantle plume, like a blowtorch, beneath the plate,” says Doug Wiens, professor of earth and planetary sciences and a coauthor of the paper. “The volcanoes would pop up in a row as the plate moved over it.”

“But it’s a bit unclear if this is happening here,” he adds. “We think we know which direction the plate is moving, but the volcanic chain is going in a different direction and two additional nearby volcanic chains are oriented in yet other directions.

“If this was just a plate moving over a couple of mantle plumes, you’d expect them to line up, as they do in the Hawaiian Islands,” he says.

Although the hot zone’s shape is ill-defined, it is clear there is higher heat flow into the base of the ice sheet in this area, Wiens says.

The most interesting finding, Lloyd says, is the discovery of a hot zone beneath the Bentley Subglacial Trench.

The basin is part of the West Antarctic Rift System, a series of rifts, adjacent to the Transantarctic Mountains, along which the continent was stretched and thinned.

The old rock of East Antarctica rises well above sea level, but west of the Transantarctic Mountains, extension has pulled the crust into a broad saddle, or rift valley, much of which lies a kilometer below sea level.

“If you removed the ice, West Antarctica would rebound, and most of it would be near sea level. But the narrower and deeper basins might remain below it,” Lloyd says. “The Bentley Subglacial Trench, which is the lowest point on Earth not covered by an ocean, would still be a kilometer and a half below sea level if the ice were removed.”

Because the West Antarctic Rift is hidden, less is known about it than about other famous rift systems such as the East African Rift or, in the United States, the Rio Grande Rift.

[Antarctic life is weirder than you thought]

“We didn’t know what we’d find beneath the basin,” Wiens says. “For all we knew it would be old and cold.

“We didn’t detect any earthquakes, so we don’t think the rift is currently active, but the heat suggests rifting stopped quite recently.”

In this way, it resembles the Rio Grande Rift, which is also no longer active but has yet to cool completely.

A period of diffuse extension created the rift valley in the late Cretaceous, roughly 100 million years ago, Lloyd says, and more focused extension then created deep basins like the Bentley Subglacial Basin and the Terror Rift in the Ross Sea.

“This period of more focused extension likely occurred in the Neogene,” Lloyd adds. “If it’s still hot there, it might also be hot under other basins in the rift system.”

How quickly will the ice flow?

The rift system is thought to have a major influence on ice streams in West Antarctica.

“But to accurately model how quickly the ice is going to flow or the rock to rebound, we need to understand the ‘boundary conditions’ for ice models, such as heat flow from the mantle,” he says.

“Seismic surveys like this one will help inform models of the ice sheet,” Wiens adds. “Modelers need an estimate of the heat flow, and they need to know something about the geological conditions at the bottom of the ice sheet in order to estimate drag. Right now, both of these factors are very poorly constrained.”

[Antarctica is losing 159 billion tons of ice every year]

While heat flow through the Earth’s crust has been measured at at least 34,000 different spots around the globe, in Antarctica it has been measured in less than a dozen places. In July 2015, scientists reported the heat flow at one of these spots was four times higher than the global average.

Ever since then, scientists have been wondering why the reading was so high. “Recent extension in the Bentley Subglacial Trench might explain these readings,” Wiens says.

The next big problem, he says, is to understand the structure under the Thwaites and Pine Island glaciers, which lie closer to the coastline than the Bentley Subglacial Trench. These two glaciers have been described as the “weak underbelly” of the ice sheet because surges in the ice flow there could theoretically cause the rapid disintegration of the entire West Antarctic ice sheet.

During the 2014-2015 Antarctic field season, Lloyd helped deploy another 10 seismic stations that together with seismometers deployed by the British will map the underside of this key area.