WASHINGTON U. – ST. LOUIS (US) — There are new details about how the world’s smallest farmer picks up edible bacteria and then harvests them like crops.

The organism, a social amoeba called Dictyostelium discoideum, carries not one but two strains of bacteria. One strain is the “seed corn” for a crop of edible bacteria, and the other strain is a weapon that produces defensive chemicals. 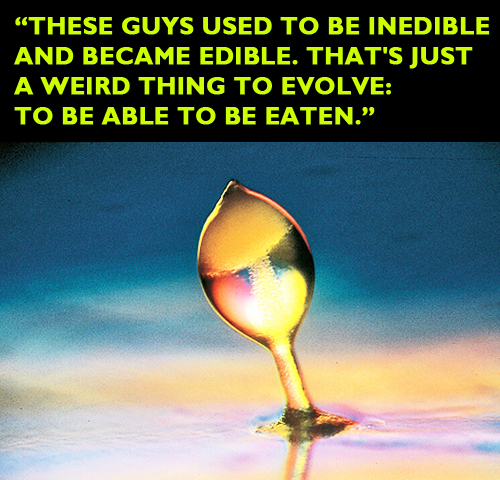 A mutation that affects this much of a genome could be lethal, but in this case it had the surprising effect of making the bacterium edible by changing its chemical profile.

Scientists at Washington University in St. Louis and Harvard University describe their findings in the Proceedings of the National Academy of Sciences.

The first farmers were found by Debra Brock, then a graduate student in the laboratory run by David Queller and Joan Strassmann at Rice University in Houston, Texas. All three scientists have since moved to Washington University in St. Louis, where Queller and Strassmann are professors of biology and Brock is a research scientist.

Brock, who had worked for years with the standard axenic (pure, or uncontaminated) lab clone, noticed something strange about the D. discoideum in the Queller/Strassmann lab, which had been collected from the wild.

When she looked at wild D. discoideum clones under a microscope, she saw bacteria in the sori of some clones. Oddly it was always the same clones that carried bacteria. The bacteria caught her attention because she had never seen anything like this in the lab clone.

“As I tell the students, it’s all about the details,” Brock says.

Whenever she found a D. discoideum clone carrying bacteria, Brock tried to isolate the bacteria. This was a bit hit or miss, she explains, because many organisms that live in the soil cannot be grown in the lab.

Eventually she found a champion D. discoideum: a farmer clone from which she was able to isolate two strains of bacteria. At least the strains looked different when they were cultured in a dish.

She sent the two bacteria out to be identified genetically and both came back as Pseudomonas fluorescens: the same species, even though they were morphologically so different.

“It was a bit of a puzzle,” Brock says. On top of that one of the two morphs was edible and the other was not, and the edible one was the first edible strain she had isolated that wasn’t a lab feedstock.

“So, I now had two bacteria that seemed the same and one was a food and the other wasn’t,” Brock says. “That was really odd.”

When the original farmer paper appeared in Nature in 2011, Jon Clardy of the Harvard Medical School in Boston noticed a passing reference to the D. discoideum farmer with two hitchhikers in the supplement section of the paper.

Brock sent the bacteria to Harvard, where Pierre Stallforth, a postdoctoral associate in the Clardy lab, grew them in liquid media. He sent extracts from the media back to Brock, who tested them on D. discoideum to see if they were active.

“Ultimately Pierre figured out that the nonfood strain was producing two chemicals: chromene and pyrrolnitrin. And excitingly, chromene is a new compound,” Strassmann says.

“A known antibiotic and antifungal, pyrrolnitrin probably also suppresses other organisms in the soil that might compete with the farmer strain.”

Assays showed that it was not merely the absence of chromene and pyrrolnitrin that made the food bacterium edible. Something else is going on as well.

‘A weird thing to evolve’

Stallforth next sequenced the entire genome of the two bacterial strains to look for mutations that might explain the differences between them.

The genes responsible for producing pyrrolnitrin were intact in both strains. So he looked at the genes for a two-part global activator that regulates the pyrrolnitrin pathway, among many other genes.

Sure enough, there was a mutation in one of the controller genes of the food bacterium that turned it off and broke the controller. As shown by others in a previous study, breaking the controller changed the expression of 10 percent of the bacteria’s genome.

“That’s pretty cool, but then you still don’t really know for sure if that mutation is the one that matters,” Strassmann says.

To check, Stallforth artificially broke the controller—and only the controller—in the nonedible P. fluorescens bacterium. The knockout strain he created had the same chemical profile as the food bacterium and it, too, was edible.

Had a similar mutation in the evolutionary past created the edible strain? To answer that question, the scientists constructed a family tree of P. fluorescens clones in the Strassmann/Queller lab by comparing 20 genes.

“It turns out that of all the bacteria strains we’ve ever isolated, the two we collected from the D. discoideum farmer clone Brock discovered are the most closely related, Queller adds.

“The tree also tells us that edibility is a derived trait. These guys used to be inedible and became edible. That’s just a weird thing to evolve: to be able to be eaten,” Queller says.

It makes sense only because it benefits kin, more of whom will be carried to new locations by the well-fed farmer D. discoideum clone, the scientists say.