U. MARYLAND (US) — Five years after the deadly I-35W bridge collapse in Minneapolis, advances in sensors are making warning systems more affordable and practical.

A new generation of these devices is needed to adequately monitor the nearly 150,000 US highway bridges—about one in four—listed by the federal government as either “structurally deficient” or “obsolete,” say researchers at the University of Maryland.

“We no longer need to roll the dice when it comes to the structural integrity of the nation’s highway bridges,” says engineer Mehdi Kalantari. “Technical advances in wireless sensors make real-time monitoring both affordable and practical.” 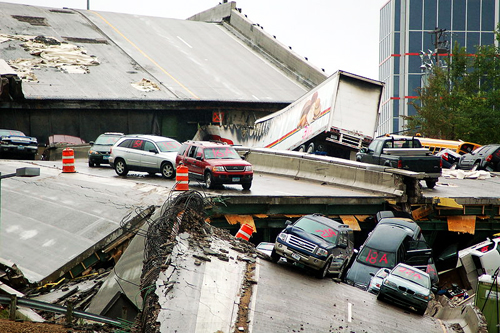 Kalantari leads one of two engineering teams at Maryland addressing the need. He is developing a system of tiny, long-lasting, energy-efficient, low-maintenance wireless sensors, along with software that analyzes real-time data collected.

Kalantari’s startup, Rensensys, has manufactured systems for use in the private sector and for testing by Maryland State Highway officials.

Another University of Maryland engineering team is working on a total “smart bridge” package with multiple technology innovations. While the system is not yet available commercially, key elements are being tested by Maryland State Highway officials, the Maryland Transportation Authority, and the North Carolina Department of Transportation.

“If the prices for system hardware and software are further reduced and standardized, we may see more widespread application in the next five to 10 years,” Fu says, adding that he has seen great advancement in this technology in the past decade.

Meanwhile, Kalantari is in the second year of testing his system on a Maryland Interstate bridge along the Capital Beltway in suburban Washington, DC. Over the past 12 months, he has upgraded his system, making it fully operational, and expanded its use to the private sector.

A few US and international firms are using it on transportation projects, as well as for monitoring the safety of building facades and the safety of large construction cranes. Also, he’s adapted the sensors for the purpose of monitoring cracks on bridge piers 120 feet underwater.

His team has equipped the system with a wide range of remote sensing functions and data analysis software capable of detecting structural anomalies. Also, the system delivers warnings to bridge maintenance engineers—by email or text messaging, in the case of severe warnings.

But these wired systems are generally too expensive to retrofit all the old bridges that need them, Kalantari says. Overall, he estimates that existing wired technologies cost at least 10 to 50 times more than his wireless system.

The latest statistics from the Federal Bureau of Transportation (2010) list nearly 70,000 US bridges as “structurally deficient,” requiring extra surveillance. In addition, more than 77,000 others are categorized as “obsolete”—exceeding their intended lifespan and carrying loads greater than they were designed to handle.

“Limited, in-person inspections are not sufficient to provide highway maintenance authorities with an adequate margin of safety when compared with real-time monitoring,” Kalantari concludes.

In its report on the fatal Minneapolis bridge collapse, the National Transportation Safety Board identified a faulty metal plate as a likely cause of the disaster. It notes an “inadequate use of technologies for accurately assessing the condition of gusset plates on deck truss bridges.”

The new wireless monitoring technology is poised to fill that need, the engineering teams report.

More news from the University of Maryland: www.newsdesk.umd.edu