BROWN (US) — Sleep often suffers during the freshman year of college, but a new study finds young students may think their sleep quality is better than it really is.

For a long list of reasons, college freshmen are often subpar sleepers. Researchers say the most common hindrances are:

Work by Kathryn Orzech, a postdoctoral fellow in sleep research at Brown University, and student health officials at the University of Arizona–Tucson, illuminates some of the factors undermining sleep. The research, published in the current issue of the Journal of American College Health, found that a campuswide media intervention costing less than $2,500 was able to help nearly 10 percent of students find ways to sleep better.

“Students report a lot of issues with sleep quality and disturbed sleep,” says Orzech, who combined online surveys and more detailed in-person interviews to determine the state of student sleep at the large public university in Tucson.

“Student sleep—or lack thereof—is a health issue that hasn’t received the attention it deserves, especially when you begin to consider how interconnected sleep is to other aspects of health,” Salafsky says. “Our findings suggest that this is a topic that students want to hear about and want to talk about.”

The state of sleep

Consistent with other studies, Orzech, Salafsky, and co-author Lee Ann Hamilton found students often scored poorly on the Pittsburgh Sleep Quality Index, a standardized measure. In results from online surveys of thousands of Arizona students between fall 2005 and spring 2007, the team found that average scores were consistently higher than 5, the level that indicates poor sleep. In fall 2005, for example, male students scored 6.38 on average, while women scored 6.69.

A typical student bedtime was about 12:40 a.m., and students routinely took 20 to 30 minutes to fall asleep. Because they often woke up between 8 and 8:30 a.m., many students netted less than seven hours of sleep a night.

Despite their objectively poor scores, seven out of 10 students surveyed described their sleep as “fairly good” or better. The disconnect, Orzech says, may arise from students making comparisons in an environment where poor sleep is common.

In 48 follow-up interviews, as well as the surveys, students acknowledged that poor sleep undermined their memory, concentration, class attendance, mood, and enthusiasm. The study data found a mild correlation between poor sleep and lower grades.

In the context of questions about sleep, many students reported that they had bouts of depression or interpersonal conflict, Orzech says. For those who reported such problems, sleep quality was generally lower.

Salafsky and Orzech says the association of poor sleep with these problems, as well as students’ willingness to acknowledge them, offers an opportunity to campus health professionals.

“We found that sleep can be an important gateway topic for more sensitive health issues such as mental health, itself another pressing issue among college students,” Salafsky says. 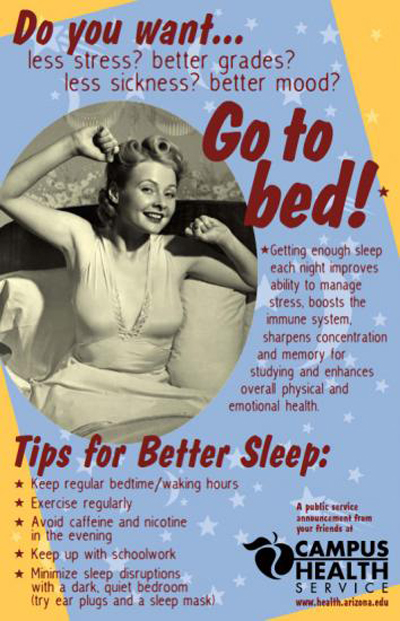 The team did not just ask about sleep, but also sought to help students. In spring 2006, Salafsky and Hamilton launched a campuswide media campaign consisting of posters, student newspaper advertisements and a “Go to Bed SnoozeLetter” that each delivered information about the health effects of sleep and tips to sleep better.

One poster, for example, advised students to keep regular bedtime and waking hours, to exercise regularly, to avoid caffeine and nicotine in the evening, to keep up with schoolwork, and to minimize sleep disruptions, perhaps by wearing ear plugs and a sleep mask.

“It resonated with people because it’s really simple stuff to do,” Orzech says.

Of 971 students who responded to questions about the campaign, 90 said it helped them sleep better. Their PSQI score dropped, they went to bed earlier, fell asleep faster, and stayed asleep longer.

“From a practitioner standpoint, we learned that a relatively modest health campaign can yield results,” Salafsky says.

Based on interviews conducted as part of the research, Orzech compiled top-five lists of what helped student sleep:

Parents really do need sleep for their mental health

Even mild COVID has lingering effects on young adults