Palmyra is one of the Northern Line Islands, atolls once only accessible by rare ship traffic. Now, passenger airlines and cruise ships make regular stops in the area. Commercial fishing boats ply the waters of even the most isolated atolls and sea-tossed trash litters shorelines. (Credit: USFWS - Pacific Region/Flickr)

Some wild places are so isolated that preserving them hasn’t been an issue—until now. Scientists have evaluated a range of ways to protect these remote areas.

Isolated wildernesses such as the Palmyra Atoll, which is now a National Wildlife Refuge, provide precious natural laboratories and hold a powerful allure in the popular consciousness.

Palmyra, a flyspeck on the map about 1,000 miles southwest of Hawaii, is one of the “model remote sites” described in depth in the new article in Biological Conservation. 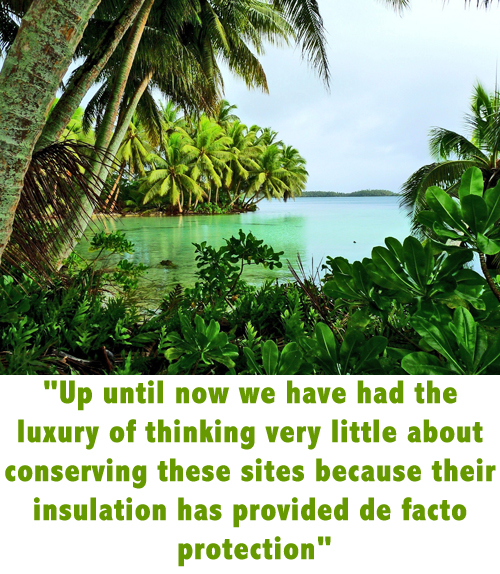 The researchers assert that globalization is rapidly eroding isolation, and now is the time to protect scientifically valuable far-flung ecosystems. They suggest that some of the logistical, cultural, and economic challenges of conserving remote places can be turned into opportunities for biodiversity management.

Palmyra is one of the Northern Line Islands, atolls once only accessible by rare ship traffic. Now, passenger airlines and cruise ships make regular stops in the area. Commercial fishing boats ply the waters of even the most isolated atolls and sea-tossed trash litters shorelines.

Still, the atoll remains a natural wonderland. It has one of the world’s most intact coral reef ecosystems, a place where divers can expect to see more than 50 reef sharks at a time.

“Preserving the last remaining undisturbed ecosystems is the only way to avoid losing intact biodiversity reservoirs,” says study co-author Fiorenza Micheli, a biology professor affiliated with the Stanford Woods Institute for the Environment and the Hopkins Marine Station.

Like preventive medicine, Micheli says, “It is a relatively small investment we can make to prepare for the highly uncertain future ahead of us.”

1. Buy and protect ecologically important areas.
Pro: Large tracts of land are likely to be more affordable and are often uninhabited.
Con: In populated remote areas, protecting areas may displace local residents or deprive them of resources.

2. Convince stakeholders that biodiversity deserves protection for its intrinsic merits.
Pro: The idea of safeguarding “wild nature” resonates with many people.
Con: Indigenous people may value nature in more utilitarian ways, due to their dependence on it for life’s necessities.

3. Protect ecosystems in the name of preserving tangible services such as water purification, pollination and food provision.
Pro: Preserving services is a practical approach that could resonate more with people in remote areas who draw many of their life necessities from nature.
Con: Many people in remote communities are unfamiliar with market-based metrics of value.

Biodiversity, the variety of living things in an area, plays an essential role in providing oxygen, food, and other necessities. Because they are largely undisturbed, remote wildernesses are “our last good banks of biodiversity, libraries of evolutionary information, and living museums showcasing how ecosystems develop and function when they are not dominated by humans,” the study’s authors write.

In this way, the world’s most remote sites serve as globally unique controls, baselines of near-pristine nature to compare to less remote places with more human impact, according to study lead author Douglas McCauley, a former graduate student at Hopkins Marine Station.

“Beyond their instructive worth to scientists, many of us can and should take satisfaction in simply knowing that there still remain spots of our planet out there where life advances, for the moment, in ways that it has for millennia,” McCauley says. “As remoteness degrades across our planet, the value and importance of these sites to science and society will only increase.”

More than 90 percent of remote places, a total land area six times larger than the United States, remains without formal protection, according to the study’s calculations.

In an era of rapidly expanding transportation networks, ever-growing urban areas and development-hungry economies, remote doesn’t mean what it once did. Even places without human footprints are affected by the long arm of human influence through factors such as climate change, which has led to more acidic ocean water, heat waves, and coral die-offs, among other impacts.

“Up until now we have had the luxury of thinking very little about conserving these sites because their insulation has provided de facto protection,” McCauley says.

Factors such as the expense of monitoring and local communities’ dependence on nature make managing biodiversity in far-off places very different from managing well-trod parks or urban green spaces.

The researchers say community planning is an essential ingredient to effective management regardless of the specific approach taken to conservation of remote areas.

The study’s observations and evaluations of conservation approaches are not meant to serve as specific guidelines, the authors say. Rather, the findings are intended to help start a broader discussion about how to save the last few remote places on Earth.